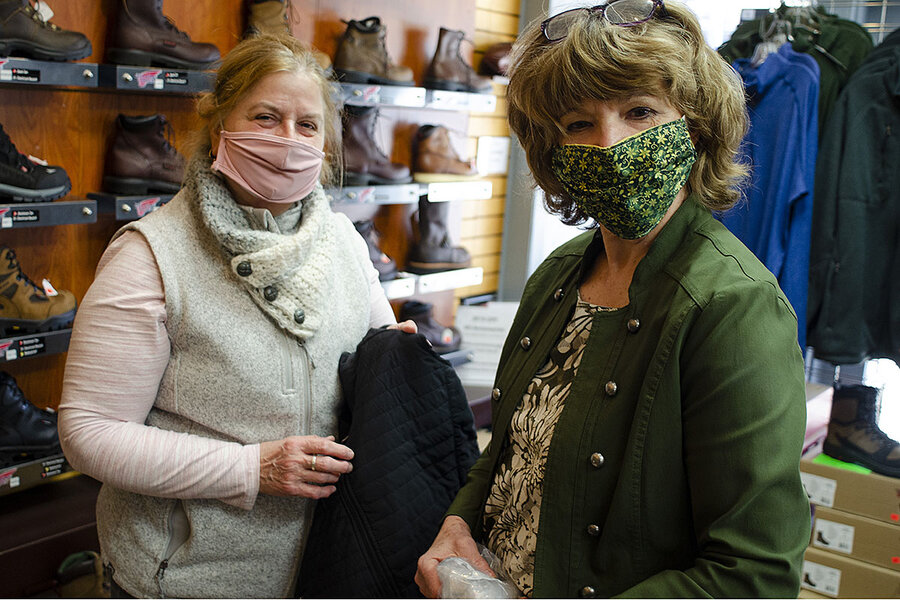 As coronavirus cases swept through the rural communities of the upper Midwest this fall, more people here began to wear masks and stay home, say residents of Shawano County, one of the hardest hit counties in Wisconsin.

Richard Kucksdorf was not one of them. An Iraq War veteran and head of the Shawano County Republican Party, Mr. Kucksdorf goes out often, attends meetings, shops. He almost never wears a mask if he can help it.

“I put one on when I go in a store and don’t want to hassle anyone,” he says. “But they don’t do any good.”

He’s not alone. At Wayne’s Place Bar and Grill in Bonduel, a crossroads hamlet in the eastern part of the county, owner Wayne Ort works behind the bar on a recent afternoon, filling small plastic containers with salad dressing, his snow-white walrus mustache drooping majestically and uncovered. No one else in the bar is wearing a mask, either. Most customers don’t, he says.

“Some of them wear them coming in, and I don’t have a problem with that,” he says. “I kind of think it’s up to each individual.”

Resistance to mask-wearing and other measures has frustrated public health officials here, in a state that was at the leading edge of a second U.S. surge of coronavirus cases. It also shows the wider challenges facing the country and a new occupant of the Oval Office.

President-elect Joe Biden has urged state mask mandates and last week called for a 100-day period of mask-wearing vigilance nationwide. Wisconsin already has such a mandate, imposed by Democratic Gov. Tony Evers on July 30 and now under challenge by Republicans in the Wisconsin Supreme Court. In the court of public opinion, many have rejected it.

The reasons include the reflexive partisanship of today’s politics, but also something deeper: a rural culture that prizes individuality and small government. That’s difficult to change, even in the face of a pandemic.

“There is a general sense of distrust of government, [along with] the importance of individual responsibility and liberty, and these really are times when that philosophy is challenged,” says Patrick Remington, a public health expert at the University of Wisconsin-Madison.

That’s not to say most residents here or elsewhere are in outright rebellion against guidance from public health officials. Polls suggest that a majority of Americans, including in Wisconsin, are wearing masks when they’re out in public – and that the share has been rising since the summer.

Some 59% Americans say they are “always” wearing a mask when outside the home, according to an Economist/YouGov poll completed in early November, while another 22% said they do so “most of the time.” That left 13% saying “some of the time” and 6% “never.”

COVID-19 came late to Shawano County. After a spring and summer of relatively few cases, infections began to surge in mid-September. They spread rapidly in October and November, straining the local health care system.

According to health data, 1 in 10 residents has been infected. In a county of just over 40,000 residents, 52 have died. By now, it seems, almost everyone knows someone who has been diagnosed – including Mr. Kucksdorf, whose wife came down with a mild case of COVID-19 in early November.

“I never got it,” he says. “When you look at all the numbers, it’s not as contagious, I believe, as we were led to believe.”

Mr. Kucksdorf’s views are not uncommon here. They reflect in part the area’s conservative and mostly Republican politics. A recent Monmouth University poll found that only a third of Republicans said they were “very concerned” that a family member would become seriously ill, compared to more than two-thirds of Democrats.

Shawano County lies in the rolling hills of north central Wisconsin, a land once inhabited by Menominee Indians and settled by German and Polish immigrants whose descendants still farm here. For years it was the home of Sen. Joseph McCarthy, who worked as a lawyer and circuit court judge here before becoming, after the Second World War, Congress’s most notorious red-baiter in an anti-communist era.

The county went heavily for Donald Trump this year – he received more than twice as many votes as Joe Biden. Trump 2020 flags still flap in the wind here, paying homage to the outgoing president but also suggesting the ongoing influence of his rhetorical efforts to minimize the dangers of the pandemic.

In the early months, a statewide order shut down nonessential businesses for two months as the coronavirus spread in the state’s biggest cities. Despite few local cases, businesses in Shawano closed. The Shawano County Historical Society canceled its annual Rhubarb Fest. And yet in June the Shawano Area Agricultural Society decided to go ahead with the Shawano County Fair in early September, even though most fairs in the state had been canceled. It was a controversial move, even in Shawano, and attendance was down.

“When we did it there were only something like 20 cases in the county,” says Dale Hodkiewicz, a retired cheesemaker and president of the agricultural group, about the decision. “So we were confident we could do it.”

For his part, Mr. Hodkiewicz doesn’t wear a mask and has little confidence in the pronouncements of public health officials.

“What did Fauci say?” he says, referring to Dr. Anthony Fauci, head of the National Institute of Allergy and Infectious Diseases. “‘Don’t wear masks. They won’t help.’ Now he swings around and says something different. I don’t trust him.”

The biggest stores in Shawano have complied with the state mask order. At Walmart, a thin, older man hands out masks at the door on a recent day, though most people come prepared. Smaller businesses are less predictable. At a store that sells ball bearings, the owner and a worker stand maskless behind the counter. At an antique store, some workers wear masks; others don’t. A small sign on the counter reads, “Please wear a mask if it makes you more comfortable.”

At The Cobbler’s Closet, a shoe store on Main Street, there’s no equivocation. It’s one of the locally owned businesses that has long insisted on masks.

“I’m happy to say more people are wearing masks,” says Nancy Dumke, the owner. “They’re taking it more seriously. It used to be a battle to get them to wear them.”

There are still battles. Two weeks ago a maskless customer entered and declared, “You can’t make me wear a mask.” He stormed out just as another customer was just about to call the police. Others have told Ms. Dumke that they shop at The Cobbler’s Closet precisely because of its insistence on masks.

Rhonda Strebel, executive director of the Rural Health Initiative in Shawano, says the spread of COVID-19 in the county has tempered some of opposition to public health measures. “When it affects their family and loved ones, then there’s a change in heart,” she says. But “people who are still healthy, and it hasn’t affected them, the mindset is still the same – especially for our farmers.”

One of the more prominent residents to be infected is John Hoeffs, a member of the Shawano City Council.

For a long time, many people didn’t worry much about the coronavirus, says Mr. Hoeffs, who spent five days being treated at a hospital. “I think they thought Shawano County was like the Siegfried Line, the war line in France, that nothing could penetrate it.” Now, he says, “I’d say a lot of Republicans are wearing masks.”

In fact, the cultural attitudes at work in this region are varied and complex. Jasmine Neosh is a member of the Menominee tribe, whose reservation, just north of Shawano County, has also been hard hit by the virus. Ms. Neosh, who lives in Shawano, says people in the county are not taking the virus seriously enough and blames them for spreading the virus. On the reservation, she says, “Whatever we have to do to protect our elders, that’s what we do. There’s no question.”

In Shawano, she says, “It’s everyone for themselves.”

Local health officials have worked hard to untether the pandemic from politics. They have appealed to community solidarity. They have asked doctors and community leaders to write public letters, imploring residents to wear masks, wash their hands, and avoid large gatherings. To skeptics, “we say ‘follow the science,’” says Julie Chikowski, who heads the Thedacare Medical Center in Shawano.

If many are still reluctant to go down that trail, it could not only hurt ongoing efforts to curb the pandemic but also bode ill for any vaccination program, says Dr. Remington. “I fear that what we’re going to see is we’re not going to get the rate of adoption we need,” he says.

And yet, even now, public health officials find cause for hope. The number of cases has fallen in both the state and Shawano County. The percentage of positive COVID-19 tests has gone down, too.

“We’re not sitting in judgment of people,” says Ms. Chikowski. “We just want to save lives. No one here is preaching. We’re just asking human beings to band together to stop this.”

A bookshop owner was targeted in a bias incident. The community rallied behind her.