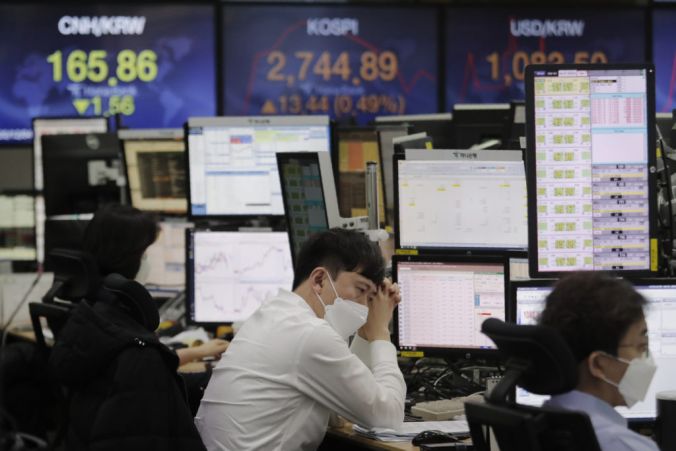 Shares were mostly lower in Asia on Monday following a report that the US is preparing to slap sanctions on a dozen more Chinese officials, ratcheting up tensions with Beijing.

Benchmarks dropped in Tokyo, Hong Kong and Shanghai but rose in Sydney.

Investors also are locking in recent gains after markets surged with signs of progress toward rolling out coronavirus vaccines in many countries.

Stocks hit record highs on Wall Street on Friday as traders took a discouraging jobs report as a sign Congress may finally move on delivering more aid for the pandemic-stricken economy.

A report by Reuters citing unnamed sources said the US departments of State and Treasury were preparing economic sanctions on a dozen more Chinese officials in response to Beijing’s crackdown on dissent in Hong Kong.

That followed a tightening of visa restrictions on Chinese Communist Party members and their families announced late last week as tattered relations between Washington and Beijing fray further.

Meanwhile, China’s politically sensitive trade surplus with the US soared to a record $75.4 billion (€62 billion) in November as exports surged 21.1 per cent over a year earlier, propelled by strong demand from American consumers.

Exports to the US rose 46 per cent despite lingering tariff hikes in a trade war with Washington, customs data showed on Monday.

Total exports rose to $268 billion, up from October’s 11.4 per cent growth. Imports gained 5 per cent to $192.6 billion, up from the previous month’s 4.7 per cent, reflecting the growing strength of China’s economic rebound from the coronavirus pandemic.

Chinese exporters are benefiting from the economy’s relatively early reopening after the Communist Party declared the disease under control in March while foreign competitors still are hampered by anti-virus controls.

“Exports were much stronger than expected in November,” said Julian Evans-Pritchard of Capital Economics in a report. He noted that consumers have stepped up purchases of goods, cutting back on services that may not be safe or available during the pandemic.

Chinese exporters have temporarily taken global market share from competitors. Forecasters say that surge is unlikely to last into 2021 once coronavirus vaccines are rolled out and consumption in Western markets gradually returns to normal.