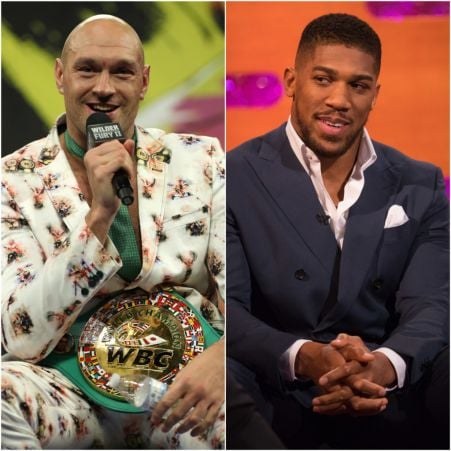 Tyson Fury has hit back at fellow heavyweight champion Anthony Joshua and warned he was “only interested in smashing your face in” after being told to join Matchroom.

The touchpaper between the pair was lit again on Monday when the WBC belt holder responded to an interview Londoner Joshua did with the Mail on Sunday.

In the interview, the 2012 Olympic champion suggested Fury should join him at Matchroom and with 258 Management if he wanted to be a superstar.

Joshua said: “I do think he (Fury) should come over to Matchroom and 258 Management and let us handle his career.

Fury replied on Monday, via Twitter, and insisted: “@anthonyfjoshua has it ever dawned on you I’m not interested in being a superstar, or famous.

“I’m a fighting man and only interested in smashing your face in, you keep the stardom, I’ll stay real, #youbigdosser I’m coming for u superstar, tick tock tick tock.”

@anthonyfjoshua has it ever dawned on you I’m not interested in being a superstar, or famous, I’m a fighting man & only interested in smashing your face in, u keep the stardom, I’ll stay real, #youbigdosser I’m coming for u superstar, tick tock tick tock ⏰⏰⏰⏰⏰⏰ pic.twitter.com/4rq5QMoV5P

An agreement is in principle for Fury to fight Joshua twice in 2021 should the latter come through his world title fight with Kubrat Pulev on Saturday.

The Bulgarian has now entered a bubble ahead of this weekend’s heavyweight bout and promoter Eddie Hearn revealed that the 39-year-old and his team have returned negative tests for Covid-19.

Pulev, who boasts a record of 28-1, on Saturday reposted a clip on Twitter of him having a swab taken to test if he had coronavirus.

Matchroom’s Hearn confirmed on Sunday morning that result came back negative and preparations for Saturday’s fight at the SSE Arena, Wembley can continue.

Pulev has already been denied one shot at Joshua when he was forced to pull out of a world title clash with the Londoner, scheduled for October 2017, at the Principality Stadium in Cardiff.

A shoulder injury sustained in training weeks before that date saw the Sofia-born boxer replaced by Carlos Takam.

Saturday will see Pulev get his long-awaited opportunity against Joshua, who has not fought since he outpointed Andy Ruiz Jr last December, with the pair initially due to fight during the summer at Tottenham Hotspur Stadium before it was postponed due to the coronavirus pandemic.

Super-welterweight contender Kieron Conway had been prepared to face Souleymane Cissokho, but will do battle with fellow Englishman Macaulay McGowen.

Ramla Ali’s second professional fight against Vanesa Caballero is no longer part of the show after Ali also returned a positive test for coronavirus.

Florian Marku, who signed a multi-fight deal with Matchroom in November, will be involved at Wembley in front of 1,000 fans in an eight-round contest against Alex Fearon.