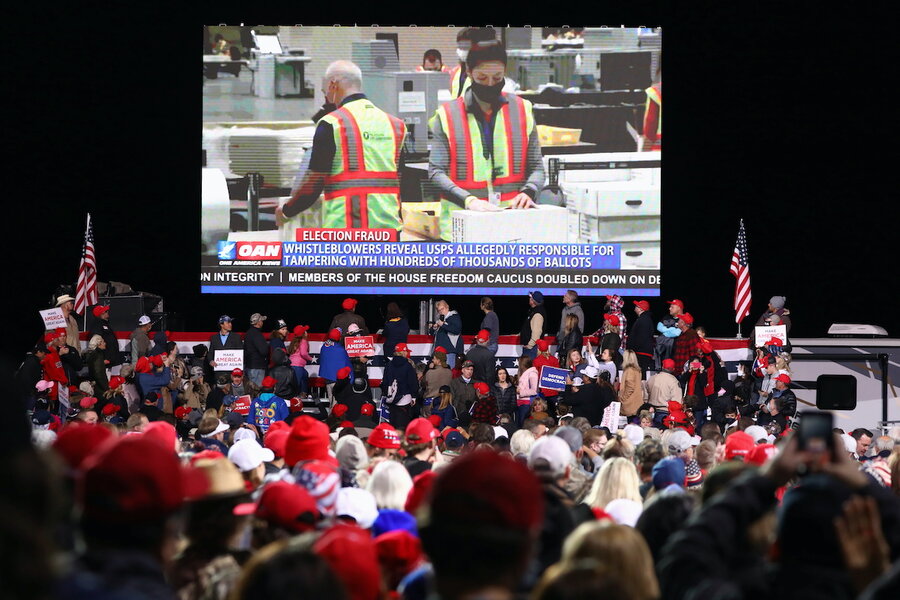 Even after he exits the White House, President Donald Trump’s efforts to challenge the legitimacy of the election and overturn the will of voters could have staying power.

Mr. Trump’s tactics are already inspiring other candidates and have been embraced by a wide array of Republicans. Supporters include congressional candidates, state lawmakers, party chairs, conservative legal groups, and appointees to previously little-known state vote-certification boards. The breadth of support for Mr. Trump’s effort could be a troubling sign for future elections.

“What this president is doing is poisoning democracy,” former Michigan Gov. Jennifer Granholm said. “And, yes, he is setting a precedent, suggesting that it is OK to violate these norms that have made our country great.”

Ms. Granholm, a Democrat, joined with former New Jersey Gov. Christine Todd Whitman, a Republican, to raise concerns about Mr. Trump’s refusal to concede and efforts to undermine the integrity of elections.

“This is not who we are as Americans, and we don’t want the public coming away from this thinking this is the norm,” said Ms. Whitman, who served in President George W. Bush’s administration.

Mr. Trump and his allies have pushed conspiracies involving voting machines manipulated by dead foreign leaders and tens of thousands of fraudulent mail ballots that somehow escaped layers of security and scrutiny by election workers across the country. They have filed lawsuits without evidence, tried to pressure state lawmakers into seating their own presidential electors, and sought to influence low-level party members who sit on the state and local boards that certify election results.

This is despite the fact that the federal government’s own cybersecurity arm declared the presidential election “the most secure in American history,” and Attorney General William Barr said the Department of Justice uncovered no evidence that would change the outcome.

A look at the claims and reality:

Mr. Trump: “I go from winning by a lot to losing a tight race. It’s corrupt.”

Mr. Trump: “It’s about big leads on election night, tremendous leads, leads where I was being congratulated for a decisive, easy victory, and all of a sudden by morning or a couple of days later, those leads rapidly evaporated.”

The facts: No mass corruption happened. Mr. Trump is actually describing a legitimate vote counting process, not a sudden surge of malfeasance that no one has seen before.

Indeed, news organizations and officials had warned in the days and weeks leading up to the election that the results would likely come in just as they did: In-person votes, which tend to be counted more quickly, would likely favor the president, who had spent months warning his supporters to avoid mail-in voting and to vote in person either early or on Election Day.

And mail-in ballots, which take longer to count since they must be removed from envelopes and verified before they are counted, would favor Mr. Biden. That pattern was exacerbated by the fact that many states prohibited early counting of mail-in votes that arrived before Election Day.

In addition, big cities are often slower to report their numbers, and those votes tend to skew Democratic. Likewise, many states tend to count mail-in ballots at the end of the process.

Mr. Trump: “In Wisconsin, as an example, where we were way up on election night, they ultimately had us miraculously losing by 20,000 votes. And I can show you right here that Wisconsin, we’re leading by a lot, and then at 3:42 in the morning, there was this. It was a massive dump of votes. Mostly Biden.”

The facts: No, there wasn’t a “massive dump of votes” in the middle of the night. Milwaukee election officials finished counting the city’s roughly 169,000 absentee ballots around 3 a.m.

Wisconsin law requires the results of those absentee ballots be reported all at once. The count of the absentee ballots was livestreamed on YouTube for anyone to watch. When it was finished, Milwaukee police escorted the city’s elections director from a central counting location to the county courthouse to deliver thumb drives with the ballot data.

Mr. Trump, on Dominion Voting Systems electoral software used in many states: “When you look at who’s running the company, who’s in charge, who owns it – which we don’t know – where are the votes counted – which we think are counted in foreign countries, not in the United States – Dominion is a disaster.”

The facts: Servers that run Dominion software are in local election offices, not in foreign countries. Claims that the company has foreign servers or ties to Germany or Venezuela are false.

It’s true that the company is privately held and does not disclose its financials, but the New York-based private equity firm Staple Street Capital has owned a majority stake in Dominion since 2018. Fictional claims that Dianne Feinstein, the Clinton family, Nancy Pelosi, and Hugo Chavez are owners of Dominion have been debunked.

“There is no evidence that any voting system deleted or lost votes, changed votes, or was in any way compromised” in the 2020 election, according to a joint statement released by the federal Cybersecurity and Infrastructure Security Agency.

Mr. Trump: “In one Michigan county, as an example, that used Dominion systems, they found that nearly 6,000 votes had been wrongly switched from Trump to Biden. And this is just the tip of the iceberg. This is what we caught. How many didn’t we catch?”

The facts: That’s a misrepresentation.

It’s true that a tabulation problem in the 2020 election involved a few thousand votes in Antrim County, Michigan. But that was the result of human error.

It turned out Dominion was not to blame, according to the Michigan Department of State. “There was no malice, no fraud here, just human error,” County Clerk Sheryl Guy told the AP. The tabulation error was corrected.

Eddie Perez, a voting technology expert at the OSET Institute, a nonpartisan election technology research and development nonprofit, agreed that the Michigan case was the result of human error involving voting technology, not the software itself.

Mr. Trump: “Dead people – and we have many examples – filled out ballots, made applications, and then voted.”

The facts: He’s repeating a false claim of dead people voting, particularly in Pennsylvania and Michigan. But there’s no evidence that this occurred, and officials in both states say the claims are unfounded.

The false claim that deceased voters cast ballots “comes up every election,” said Jason Roberts, a professor of political science at the University of North Carolina at Chapel Hill.

Experts told the AP that it is common for state voter rolls to include voters with birthdates that make them appear impossibly old, but these are usually explained by human error, software quirks, or voter confidentiality issues.

“A similar complaint was brought before a PA court – and soundly rejected,” the Pennsylvania Office of Attorney General said in a statement. “The court found no deficiency in how PA maintains its voter rolls, and there is currently no proof provided that any deceased person has voted in the 2020 election.”

Tracy Wimmer, a spokesperson for Michigan’s secretary of state’s office, told the AP that on rare occasions a ballot received from a voter may be recorded as though that person is too old to be alive. This can occur when an incorrect birth year is entered on voter rolls.

Some of the claims about dead voters appear to stem from a federal lawsuit that alleges Pennsylvania failed to “maintain accurate and current voter rolls” that include 21,000 apparently deceased registrants. But that is not the same as votes from dead people being cast and counted. The Public Interest Legal Foundation, a conservative group based in Indiana, amended the lawsuit on Nov. 5 against Pennsylvania Secretary of State Kathy Boockvar.

The group has taken legal action in a handful of places to try to force voter roll pruning. In December 2019, the group filed a lawsuit against Detroit election officials alleging that the city had over 2,500 dead people on the voter rolls — including one born in 1823. The lawsuit was dropped in June 2020 after election officials updated voter rolls.

Mr. Trump: “In Pennsylvania, large amounts of mail-in and absentee ballots were processed illegally and in secret in Philadelphia and Allegheny counties without our observers present. They were not allowed to be present. … They were thrown out of the building.”

Mr. Trump is misrepresenting a court case in the state and what happened at voting places. No one tried to ban poll watchers representing each side in the election. Democrats did not try to stop Republican representatives from being able to observe the process.

The main issue in the case was how close observers representing the parties could get to election workers who were processing mail-in ballots in Philadelphia. Mr. Trump’s representatives sued to allow the observers to get closer than the guidelines had allowed. A court ruled in favor of that request.

The counting in Philadelphia was being livestreamed, and Mr. Trump’s lawyers admitted in court that their campaign had observers in the room – “a nonzero” number of them, as they put it. Poll watchers have no role in counting votes.

For ​Biden the top economic priority is clear. It just isn’t easy.