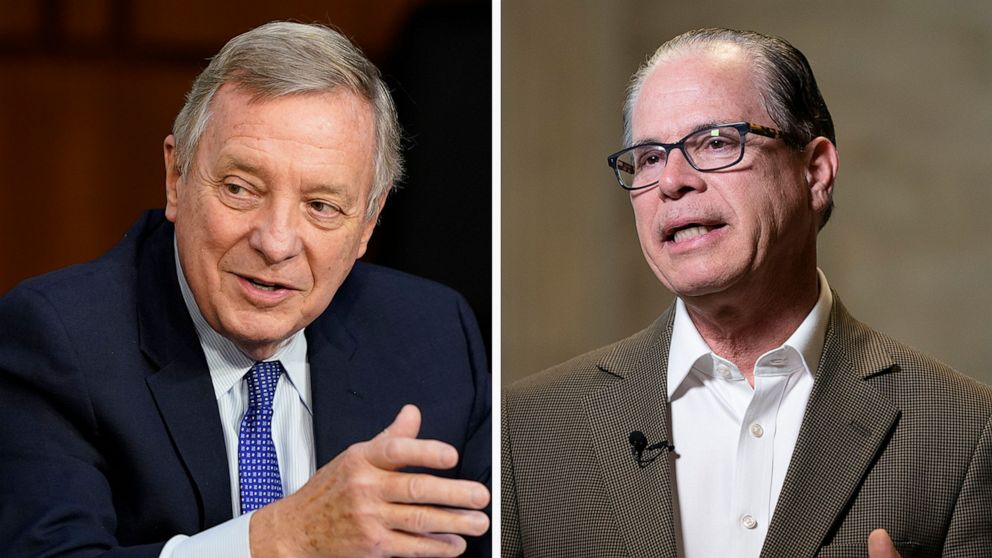 The legal process concerning election results must be allowed to play out, Sen. Mike Braun, R-Ind., said Sunday on ABC’s “This Week,” but the majority of the court cases filed by the Trump campaign have been thrown out due to lack of evidence.

“There have been more than 55 lawsuits brought forward by the president and his allies, 38 have been dismissed by judges. There have been investigations directed by the Justice Department, by the attorney general. The attorney general came back and said there’s no evidence of widespread fraud. So the process has played out, hasn’t it? And there’s no evidence of widespread fraud. Why can’t you accept the results?” ABC News Chief Anchor Stephanopoulos asked Braun.

“I think it’s easy to say it’s played out because that might be the most convenient thing to say,” Braun said, then citing a now-debunked video of alleged fraud in Georgia.

“Well, I have to stop you right there,” Stephanopoulos interjected. “That was exactly the proper process for counting the ballots. There wasn’t anything wrong shown in that video at all. So you’re just throwing out a claim out there that doesn’t prove what you’re saying.”

“All I can tell you,” Braun responded, “is if you don’t at least give perfunctory kind of investigation into it, whether it’s Dec. 14th and what happens beyond, you’re going to have a good part of the country — it’s over 50% that view that something is amiss, and that’s going to carry forward in terms of undermining a democracy.”

Braun has been an ardent defender of President Donald Trump and has followed his lead in baselessly questioning the results of the election and its integrity, calling for all “improprieties” to be investigated.

“Well, we’ve got a process and I think we have been going through it since the election, and it’s going to play itself out,” Braun told Stephanopoulos. “I think that we’ve got a threshold coming on Dec.14th when the electoral college meets. I think … (when you) reflexively dismiss that nothing has happened at all, versus the other side of the spectrum — fraud widespread — and it’s a wide gulf.”

The Washington Post surveyed all Republican members of Congress this week by asking them if they accept Joe Biden as the winner of the election. Only 27 members said that he had won and 88% of the Republicans would not answer the question.

Braun did not acknowledge the president’s role in sowing doubts about the election. Across the country, secretaries of state and election officials at the federal level agree that there is no evidence of widespread fraud or security concerns.

“Well, I guess the question is, is it — is the harm to democracy being done by those who propagate false claims?” Stephanopoulos pressed Braun. “In Wisconsin, judges have dismissed those claims as well after investigating it.”

He also highlighted Sen. Mitt Romney, R-Utah, who said this week that not accepting the results of the election is undermining democracy, which Braun said is “one extreme” viewpoint.

“But on the other hand, … look at Arizona, Wisconsin and Georgia. When you take the number of electoral votes associated with that roughly 40,000-vote popular margin, that’s under half of what it was back in 2016,” Braun said.

Braun responded, “Ballot integrity — a whole other issue — and from the get-go, there was a dialogue on recounts and people have certified all this stuff. That, to me, is dismissing some of the evidence, sworn testimony, that’s out there, and if you don’t carry it to its conclusion, you’re going to have uneasiness going into the future.”

Some Republicans, including the president himself, have called on state legislatures to meet to discuss the results of the election and possibly choose a new slate of electors to cast their ballots for Trump on Dec. 14. State lawmakers have largely said such a move is not within their purview.

As ABC News has reported, litigation from the Trump campaign has not gained traction. A Nevada judge Friday noted that the Trump team “failed to meet their burden to provide credible and relevant evidence … to contest the November 3, 2020 General Election.”

Georgia Secretary of State Brad Raffensperger told Stephanopoulos in a separate interview on “This Week” that Republicans simply couldn’t get more voters out to the polls.

“At the end of the day, we as Republicans didn’t turn out enough voters. Our office as secretary of state is to look at what those totals were and we report the results. That’s why it gets back to the state party didn’t do their job, didn’t raise enough money or turn out their people,” Raffensperger said.

“Joe Biden is going to be sworn in as the next president of the United States on Jan. 20th,” Durbin told Stephanopoulos.

“In the remaining days we’re going to be in session in Washington. I hope we don’t get embroiled in that debate further. I want us to focus on what we’re trying to achieve with this COVID relief package. This is our last chance before Christmas and the end of the year to bring relief to families across America in the midst of a public health crisis. It’s time to put the partisan labels aside,” he added.

Stephanopoulos asked Durbin how he can expect bipartisan negotiations on coronavirus relief if his colleagues cannot accept the results of the election.

“I’ll tell you why I expect it, because there’s 10 United States senators, and I am one of them, who have been meeting hour after hour after hour, day after day after day, conference calls and the like, putting together a package with members of the House,” Durbin said. “I want to focus on that, on a bipartisan effort. I know there are plenty of things that divide us. Let’s bring us together as a nation and as a Congress to get this job done.”

Negotiations on a bipartisan package resumed on Capitol Hill this week, with new hope for a deal to get through Congress before the end of the year.

Although Durbin said a few additional details need to be ironed out in the relief proposal, he said he hopes Senate Majority Leader Mitch McConnell will bring the bill to the floor, ​despite the fact that McConnell hasn’t explicitly endorsed the package yet.

“He’s expressed some interest, positive feeling toward the effort. I hope he feels that way when he gets a chance to read it in detail,” Durbin said.

The bipartisan proposal includes funds for small businesses, state and local government and additional funds for unemployment, but does not include another round of direct checks to Americans, which some progressive members of Congress, like Sen. Bernie Sanders, I-Vt., strongly oppose.

Durbin said he didn’t think that would be the case.

“I don’t think it will make it more difficult at all. We finish these three or four months and we’ll be into the vaccinations and I hope have a much better view of where we’re going with this national pandemic, but we may need more. We may need more on the logistics of the vaccine to get it out and administered across the United States. I think the American people will respond and Congress will follow and come up with a bipartisan response that’s needed for this nation,” he said.

Should the fate of Senate runoff elections in Georgia keep the body in the hands of Republicans, Durbin said he hopes a Republican-led Senate will be willing to work with a Biden administration.

“I hope they will. I’m hopeful they will, but I can’t say for certain that they will. There have been so many political things, and if Joe Biden succeeds — and I want him to — then America will succeed,” he said.

Give Americans another check