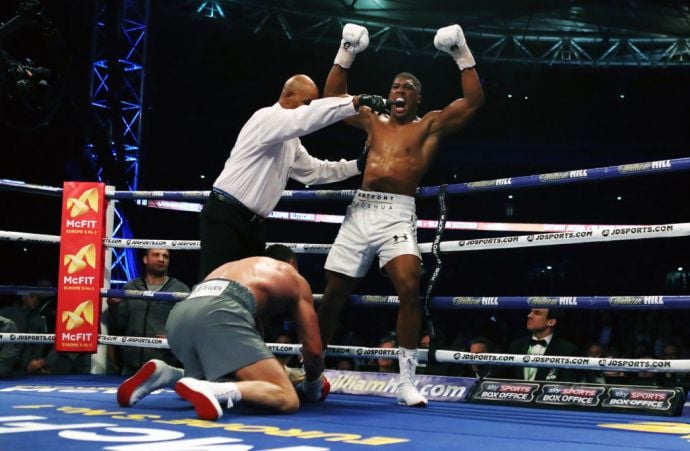 Anthony Joshua beat Wladimir Klitschko by technical knock out to win in front of 90,000 spectators at Wembley Stadium in 2017, © PA Archive/PA Images

Anthony Joshua makes the first defence of his second reign as world heavyweight champion when he faces Kubrat Pulev on Saturday at Wembley’s SSE Arena.

It will be his first fight since he regained his WBA, WBO, IBF and IBO belts from Andy Ruiz Jr in Saudi Arabia last December.

Here, the PA news agency identifies the five most important bouts to date which saw Joshua get to this point in his career.

It is tempting to wonder whether Joshua’s route to the top would have been quite so smooth had justice been served in his opening bout of the 2012 Olympics. Most ringside observers scored clearly in favour of the experienced Cuban, but Joshua sneaked the verdict by a single point and the rest, as they say, is history.

Joshua was given a stern test before avenging one of his three amateur defeats with a seventh-round knockout of Whyte at the O2 Arena. Joshua was visibly shaken by Whyte’s shots in the second but recovered to dominate the ensuing rounds, finally stopping his opponent with a heavy right and uppercut combination.

In front of a post-war record 90,000 crowd at Wembley Stadium, Joshua sealed superstar status with an 11th-round stoppage of defending champion Klitschko. Knocked to the canvas in round six, Joshua recovered and led on two of the three scorecards when a sustained barrage forced the referee’s intervention.

When original opponent Jarrell Miller failed a drugs test, the lightly-regarded Ruiz stepped in to face Joshua on his much-vaunted American debut. It turned into a nightmare for Joshua, who was floored four times and finally stopped in the seventh round, in arguably the biggest heavyweight upset since James ‘Buster’ Douglas dethroned Mike Tyson in 1990.

Water No Get Enemy 🤛🏾 pic.twitter.com/mdBMDfNMac

Everything was on the line when Joshua stepped into the ring at the Diriyah Arena to face Ruiz Jr for a second time. The response was a slick display, with the former champion sticking to a back-foot game plan to win back his belts on points before the heavens opened in Saudi Arabia. Largely resisting Ruiz Jr’s attempts to engage in another scrap, Joshua continued to pick off the rounds and dance away from trouble to become world heavyweight champion for a second time.