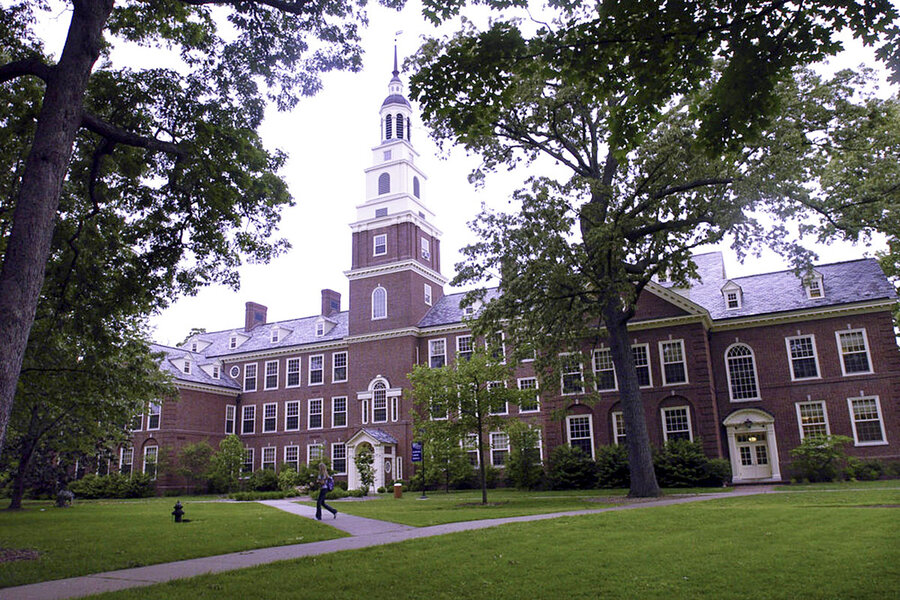 Edgar Ortiz pauses as he operates a wooden loom several times larger than he is, reflecting on his college job as he fashions a place mat.

“Who comes to college and learns how to weave?” he asks.

For Mr. Ortiz, a chemistry major set to graduate this spring, weaving place mats wasn’t how he originally imagined he’d be spending his time outside the lab. But Mr. Ortiz attends Berea College, where every student is assigned a job on campus, ranging from farm work to artisanal craft skills – such as weaving or woodworking – to more routine posts such as cleaning or being a teaching assistant.

This past semester, though, Mr. Ortiz was missing more than half of his co-workers. Social distancing rules had limited the capacity of the weaving studio and the number of students able to work there. On a recent afternoon, he was joined by only one other student employee and their supervisor, who is overseeing seven students this year instead of her usual 16 to 18.

Students at work colleges like Berea – there are eight others in the United States – are employed by the school in an effort to keep costs down for both students and the administration. Working through the pandemic has meant adjusting to new health standards and working in smaller, socially distanced crews – if students are able to work at all. And for the colleges, disruptions to the student work programs lead directly to disruptions to day-to-day operations.

“We had to shift to a work program where we were covering the essential jobs first,” says Berea President Lyle Roelofs. This was especially true in agriculture, where the college’s crops and livestock needed diligent care, but there were fewer students on campus to provide it. “It was sort of amusing,” he says, recalling one student who was originally planning on working in the fundraising office but wound up “being asked to explore the dignity of labor by feeding the hogs.”

The value of work

Some work colleges trace their roots as far back as the 1800s, though they were not officially designated as such by the federal government until the early 1990s. From a financial perspective, work colleges employ their students as a way to cut down on the costs of running a school. Students are either paid directly or have their earnings applied to the balance they owe the college. But there’s a philosophical underpinning to the work programs as well.

“There’s a value in a hard day’s work,” says Allison Southard, director of development at Alice Lloyd College in Pippa Passes, just 120 miles from Berea. By working, students “are invested in their own education,” she adds.

For Sylvia Asante, Berea’s dean of labor, the work program helps build more well-rounded students. “So, they’re not saying, ‘Oh, I want to go to med school.’ And that’s it,” she says. “You can go to med school. But guess what? You could still be a farmer.”

At Paul Quinn College in Dallas – distinct in that it’s an urban work college and a historically Black school – many students “come from backgrounds of long-term unemployment or long-term underemployment,” explains Michael Sorrell, president of the college. Officially becoming a work college under his leadership in 2017 gave the school “an opportunity to stand in the gap,” he says.

Of course, it’s easier to “stand in the gap” when students are actually on campus.

The ripple effect of remote learning

In a year that saw publicly traded shares in Zoom skyrocket, work colleges were at a disadvantage when it came to remote learning, since they often serve students from poor and rural backgrounds who may have limited access to the internet. This made Alice Lloyd’s abrupt switch to online classes in the spring especially difficult.

Having fewer students on campus had big ramifications for operations as well. A small workforce continued through the summer, with only about 30 students on campus to earn extra money – and keep the college running – versus the usual 100 or so. “We had some staff who were picking up on things that they wouldn’t normally do,” says Ms. Southard. “Everybody pitched in and did what needed to be done.”

This fall, Alice Lloyd’s full student body (just under 600) returned to in-person classes, which also shored up the college’s workforce – at least when students weren’t in quarantine.

At Paul Quinn, classes were offered exclusively online this fall. The indoor farm was maintained by a skeleton crew due to social distancing and safety measures, and some students found themselves unemployed. But that didn’t mean President Sorrell let them off easy. Students who weren’t able to work on campus or at their internships were enrolled in a course to build soft skills as well as greater fluency in Microsoft Office products.

Berea opted for a hybrid model this past semester, and 50% of the student body chose to take classes from home. Of that group, some were able to work remotely, but overall the college’s workforce was down about 600 to 700 students. And after in-person instruction ended with the start of Thanksgiving break, most students left campus and aren’t slated to return – or start working again – until the start of spring term.

“I think it was actually a positive experience for our students to realize that when work needs to be done, everybody’s got to do their part,” says Dr. Roelofs, Berea’s president. “And by and large, we had excellent morale, given the sacrifices people were making.”

Even with the upheaval caused by the pandemic, freshman Kelli Thomas, who stayed on campus this fall, still considers Berea the perfect college for her. Hailing from Floyd County, Kentucky, where 34% of the population lives in poverty, she comes from a family with no income. At Berea, thanks to the school’s endowment and its work program, she pays nothing and has no debt. “I’ve always wanted to go to Berea ever since I was in middle school,” she says. “I knew that if I didn’t get to go here, then I probably wouldn’t get to go anywhere else.”

As for Mr. Ortiz, the chemistry major, he plans to use his degree to work in the cosmetics industry or as a tutor. And in his free time?

“I might want to invest in a loom myself and start making my own products,” he says. If nothing else, he’ll have a hobby to keep himself busy if society still remains largely homebound come summer.

Why President Trump’s grip on Washington may linger