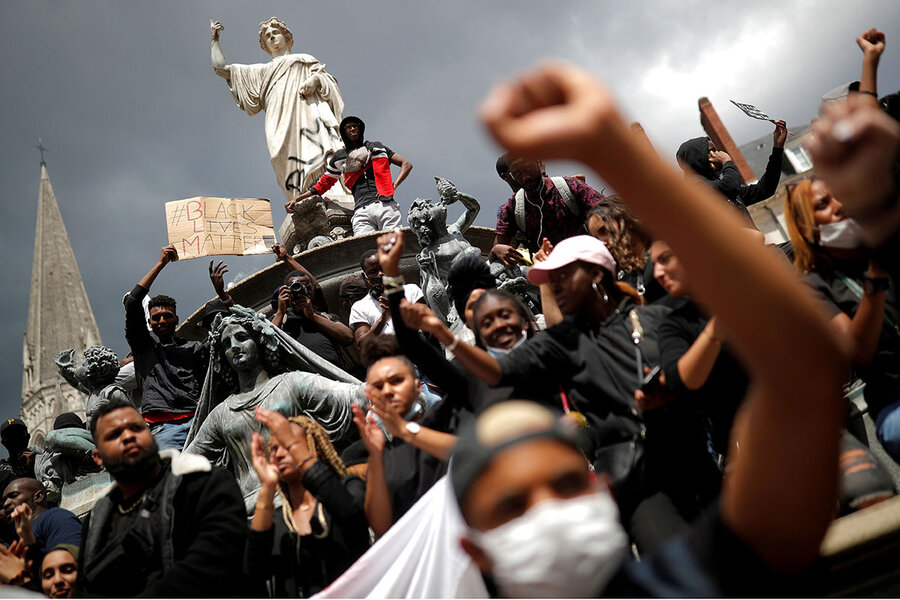 Protests have rocked the nation for the last two weekends, as hundreds of thousands called on the government to crack down on police brutality and put an end to a controversial national security bill that would have punished those who film police with malicious intent. The government has since backtracked and promised to rewrite the bill.

France has a historical legacy of promoting and protecting human rights, and has numerous mechanisms in place to that effect. But as citizens continue to film instances of police brutality, the vision of France as a human rights defender increasingly belies reality. Now advocates hope the state will use the pause to recalibrate, in order to be the human rights model it claims to be.

“France has the objective of becoming a human rights leader, but there is a big difference between that idea and reality,” says Marie-Hélène Bacqué, a professor of sociology and urban studies at Paris Nanterre University. “And because it calls itself a human rights leader, every time the French state does something that goes against human rights, the gap appears even wider.”

“Bruises to your sense of self”

The Declaration of the Rights of Man and of the Citizen, signed in 1789 during the French Revolution, has set popular conceptions of individual liberties across the world. The framing of France as “the country of human rights” has often been used by the state to promote itself, and by the public to criticize the government.

But while the state actively supports several United Nations and European Union resolutions on human rights, poverty, and the elimination of religious discrimination, some experts question whether the concept of France as a human rights leader is outdated and elitist.

The country has yet to fully come to terms with its colonial past, though President Emmanuel Macron is the first French president to call it a “crime against humanity.” And France continues to struggle to provide the same opportunities to its racial minority groups, particularly from North Africa. A 1950s housing policy for temporary immigrants, which segregated many North Africans into city outskirts, created inequalities still felt by immigrant groups and their descendants today.

In a 2016 study of 20,000 people by the French Institute for Demographic Studies, immigrants of African origin – many of whom were naturalized citizens – said that even if they felt French, they didn’t feel perceived as French by others. Separate studies have shown that visible minorities are more likely to experience discrimination in the job and housing markets.

France’s promotion of secularism, or laïcité, adds an extra layer to the discrimination they experience, as many feel unfairly targeted by the law, including a new bill against Islamist separatism. But because France does not allow for census data based on ethnicity or religion, it has been hard for the state to fully grasp the depth of discrimination some face. It’s been even harder to implement policies to address any subsequent inequalities.

Racial discrimination within the French police force has only added flames to the fire. Sebastian Roché, a sociologist who studies police and security at the French National Center for Scientific Research, has led a series of studies in the past decade on the relationship between police and minorities, especially youth. All have shown that police were more likely to discriminate against young people based on skin color.

“The authorities try to minimize things, to say this is a problem of a few individuals,” says Mr. Roché. “But studies show that there is a systemic problem with racism and violence in the French police.”

Piroo, a Tunisian-Frenchman from the suburb of Sartrouville who goes by an assumed name to protect his privacy, has had numerous interactions with French police growing up. He’s been beaten up, tear-gassed, and insulted with the worst racial slurs. Once, after a simple identity card check went awry, he and his friends were driven out to a nearby forest in a squad car, dropped in the woods, and told to find their way home.

These types of incidents, says Piroo, who now runs a nonprofit to engage young people from the Paris suburbs in community projects, create a sense of alienation for youth, who are often second-generation French and already questioning their sense of belonging and identity.

“Those physical bruises [by police] go away, but the bruises to your sense of self stay with you for a long time,” he says. “If you’re young and already lost, you might start thinking, why do I live in a country that doesn’t want me? Why did my parents bring me here? And some will answer violence with violence.”

A chance for change?

Race-related police brutality may be getting the French public’s attention, but the country has experienced a broader level of police violence in the last few years that has thrown a spotlight on its record as a human rights defender.

France’s IGPN police watchdog registered more than 300 complaints of police abuse related to the yellow vest protest movement last year. Experts say the level of injuries and deaths during the movement’s December 2018 to May 2019 height – 30 mutilations and two deaths – are the most tied to a prolonged protest since the May 1968 unrest, which upended the nation.

That’s partly due to how French police are now armed. Over the last decade, municipal police have more generally utilized rubber bullets and grenades to maintain order. In addition, plainclothes officers have joined public order operations and are equipped with similar weaponry.

This, along with the separatism and national security bills – even if the latter is set to be rewritten – has been labeled by the president’s critics as a move toward a more repressive leadership, which employs policies that go against the basic French values of liberty, fraternity, equality, and laïcité.

Amid back-to-back weekends of protests, Mr. Macron addressed the media about the public’s concerns. He said the government would create a platform for citizens to report discrimination in January, and told children born to immigrant parents that “their history was part of [France’s] history.” He said that citizens would continue to have the right to film police, and is planning a summit next month to help build trust between citizens and police.

The French president has indicated he has the political will to address the recent episodes of racism in France. But experts say the country’s problems with inequality are systemic, and solutions won’t come overnight.

“Mr. Macron has a very theoretical vision of racism that does not relate to reality of society,” says Jean-François Leguil Bayart, a professor of anthropology and sociology at the Graduate Institute in Geneva. “When it comes to the actual level of discrimination, the French government is in total denial.”