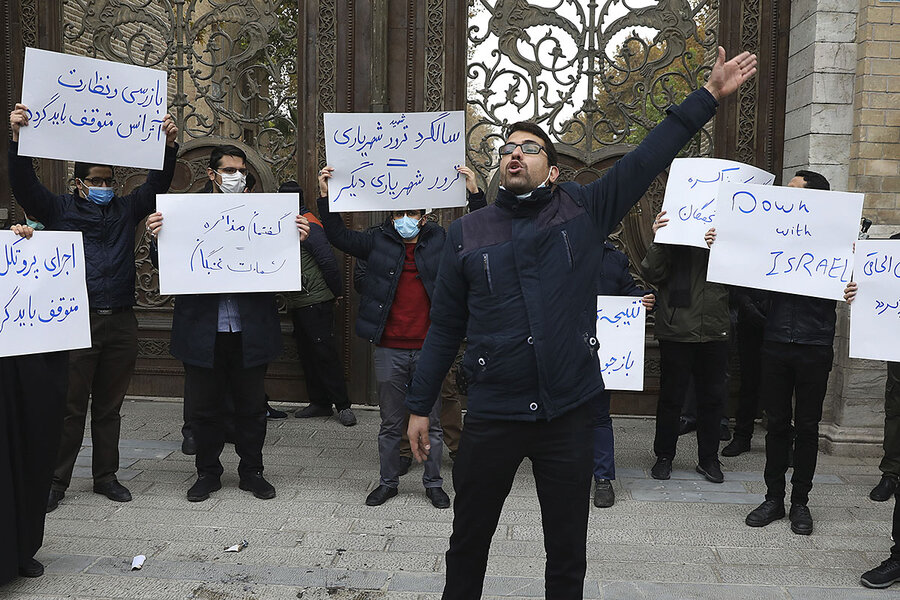 As President-elect Joe Biden considers his first foreign-policy moves upon taking office, perhaps none is garnering more attention – and coming under greater pressure – than his stated intention to return the United States to the Iran nuclear deal.

The recent assassination of Iran’s top nuclear scientist – unclaimed but bearing the hallmarks of an Israeli operation – is widely seen as aimed at poisoning the well that both the Iranian government and the new Biden national security team would draw from to renew diplomacy and fashion a return to the deal.

In the same vein as the dramatic daylight killing of nuclear scientist Mohsen Fakhrizadeh east of Tehran on Nov. 27 – an attack that reportedly included a satellite-operated, vehicle-mounted machine gun – the additional sanctions the Trump administration has said it will continue to pile on Iran until Jan. 20 are seen as designed to steepen Mr. Biden’s path to the two-part diplomatic initiative he envisions with Iran.

And especially if these actions were to prompt retaliatory measures by Iran and provoke “an escalatory crisis, then yes, that would make a return to diplomacy under a Biden administration that much more difficult,” adds Mr. Malley, who is now president of the International Crisis Group.

As Mr. Biden and his national security team have spelled out in articles and speeches on Iran over recent months, Step 1 of a Biden plan would be a return to the Joint Comprehensive Plan of Action, which the U.S. agreed to in 2015 along with five other world powers, in exchange for Iran’s return to compliance with the deal’s limitations on its nuclear program. President Donald Trump withdrew from the JCPOA in 2018, launching a policy of “maximum pressure” of ever-increasing sanctions on Tehran.

Step 2 would be a return to negotiations to address both the original deal’s sunset clauses and other destabilizing Iranian activities beyond the nuclear program: from ballistic missile development to support for regional proxies and groups the U.S. and others have deemed terrorist organizations.

Yet despite the high-powered campaign aimed at killing the prospects for diplomacy, no one seems to think that the efforts so far have done more than complicate the president-elect’s path.

One result is that former U.S. officials, nonproliferation experts, and Iran specialists are publicly weighing in on the issue – both for and against a return to the nuclear deal, and to a degree not seen on other anticipated foreign-policy steps.

Move fast! some counsel, warning that Iran’s moderates will be doomed in Iran’s presidential election next year if there is no U.S. return to the nuclear deal and accompanying sanctions relief. And if a hard-line candidate carries the day next June, they add, forget diplomacy.

No! Do not rush to give up the leverage the Trump administration will have bequeathed you, opponents of a return to the original JCPOA say. Continue to dangle the carrot of economic relief, they add, but don’t squander it in exchange for a return to limits on the nuclear program to which Iran already committed.

Iran deal skeptics worry that the Biden team will give away everything just to return to the Obama-era deal and to signal America’s return to multilateral diplomacy – retaining no leverage for the follow-on deal on Iran’s other regional activities that Mr. Biden says he wants.

“If they move prematurely on sanctions relief, what will they have left to deal on Iran’s broader bad behavior? Therein lies the conundrum of the incoming Biden administration,” says Behnam Ben Taleblu, a senior fellow focusing on Iranian security and political issues at the Foundation for the Defense of Democracies in Washington.

“The last few blows of ‘maximum pressure’ the Trump administration is landing ought not to be traded away so easily as a way to facilitate diplomacy,” he adds.

The steady addition of new sanctions continued this week, as the U.S. Treasury on Tuesday blacklisted Iran’s envoy to Yemen’s Houthi rebels and designated the Tehran-based Al-Mustafa University for facilitating recruitment to the Iranian Revolutionary Guard Corps, which the U.S. considers a terrorist organization.

Critics say front-loading sanctions relief as part of a deal returning the U.S. to the JCPOA would be akin to the U.S. agreement, as part of the original nuclear deal, to return hundreds of millions of dollars in frozen Iranian assets to the Iranian government. Iran used the windfall to ramp up its missile development program and its “nefarious” activities across the Middle East, these critics maintain, while giving little in return.

But proponents of a U.S. return to the deal counter that the commitments Tehran made (and largely kept) to reduce its nuclear activities succeeded in extending Iran’s “breakout” time to developing a nuclear weapon to over a year. Compare that, they say, to the estimated three-month breakout time Iran has achieved since once again ramping up its production of fissile material in response to the Trump administration’s withdrawal from the JCPOA.

Essentially Mr. Biden’s aim is to use a deal getting both the U.S. and Iran back in compliance with the JCPOA to put time back on the diplomatic clock – thereby paving the way for the more ambitious Step 2 of his Iran diplomacy plan. The Biden team is said to be thinking broadly in envisioning negotiations on Iran’s regional activities that could encompass the Gulf states, Saudi Arabia, and even Israel.

But such ambitious diplomacy would require a lot of time and would certainly run up against the political clocks counting down in the Middle East, regional experts say.

“There’s a very narrow window of time between Jan. 20 and elections in Iran in June, so what makes the most sense is an [initial] agreement to reduce tensions,” says Ilan Goldenberg, director of the Middle East Security Program at Washington’s Center for a New American Security. “You need to get something to stabilize the situation to work back from where we’ve been over the last few years.”

And then there’s Israel, and the growing prospects for another round of elections there in March or April.

Prime Minister Benjamin Netanyahu has been perhaps the world’s biggest supporter of President Trump’s foreign policy, and has worked harder than any other foreign leader to undermine the JCPOA. The Fakhrizadeh assassination only adds to suspicions that Israel is doing what it can to torpedo Mr. Biden’s hopes of returning to diplomacy with Iran.

But some Israeli experts also suggest that Mr. Netanyahu will not want to enter elections totally on the outs with the new powers in Washington. Nor, they say, can he afford to ignore the sectors of Israeli society, including within the military, that do not consider the U.S. withdrawal from the nuclear deal and heightened U.S.-Iran tensions as good for Israel.

“There is no question the JCPOA is imperfect,” but the question for Mr. Netanyahu will be “is Israel better off with no JCPOA or an imperfect JCPOA?” says Shai Feldman, a former director of Middle East studies at Brandeis University in Waltham, Massachusetts.

President Trump considered the nuclear deal “the worst agreement ever,” and Mr. Netanyahu concurred, “but it was not replaced by a different approach that … brought any significant fruits,” says Mr. Feldman, now president of Sapir Academic College in Israel. Except, he adds, that “four years later, Iran is closer to a nuclear capability.”

Some regional analysts say they take Mr. Biden’s two-step vision for negotiations with Iran as a good sign that the U.S. is not about to abandon the Middle East.

But Mr. Taleblu at the democracy foundation says he worries that U.S. fatigue with the region will prompt Mr. Biden to use up the sanctions leverage he inherits on getting a nuclear deal – and then will lose interest in addressing Iran’s destabilizing regional activities.

“There’s a structural trend to want to be done with the Middle East,” a trend that suits Iran just fine, Mr. Taleblu says. “My concern is that [the Biden team] will decide they’ve ‘solved’ the nuclear threat” with a quick deal “and won’t have the incentive to deal with the broader threats Iran poses to the region.”

As Floyd case goes to trial, Minneapolis braces for unrest

Most awkward awards show ever?