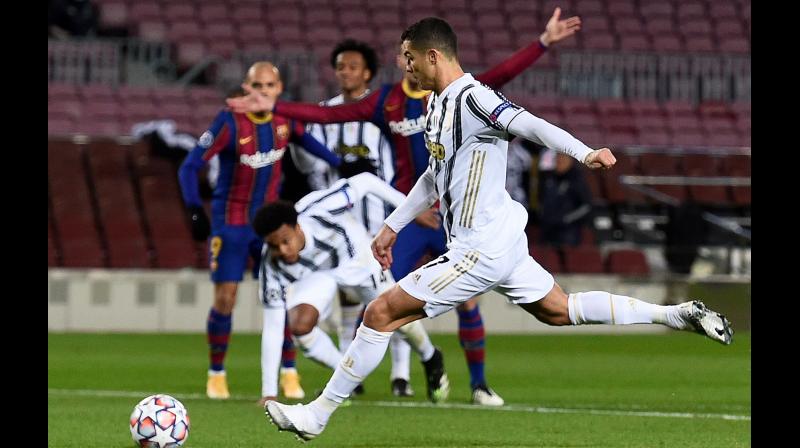 Barcelona: Cristiano Ronaldo struck twice from the penalty spot to win his battle with rival Lionel Messi and guide Juventus to a 3-0 win over Barcelona on Tuesday, earning the Italians top spot in Champions League Group G.

The former Real Madrid striker and his Argentina counterpart traded Ballon d’Or wins for a decade between 2008-2017 and were figureheads for the duelling Spanish giants, but there was only one winner at the Camp Nou as they met for the first time since Ronaldo’s departure for Juve in 2018.

Andrea Pirlo’s Juventus lost 2-0 at home against Barcelona in October without Ronaldo, sidelined with Covid-19, but were greatly improved and earned the first Champions League away win against Barcelona since Bayern Munich triumphed in 2013.

Both sides, tied on 15 points, were assured of qualification before kick-off, but Juve’s three-goal victory handed them a superior head-to-head record.

It only took 13 minutes for Ronaldo to break the deadlock, slotting home from the penalty spot after the referee deemed Ronald Araujo’s challenge on him a foul.

Juventus did not relent and their pressure led to a second goal, US midfielder Weston McKennie volleying home Juan Cuadrado’s sweetly clipped cross in the 20th minute.

The Catalans and their captain Messi finally woke from their slumber, as the attacker had one effort blocked by Matthijs de Ligt and another saved by veteran goalkeeper Gianluigi Buffon, while Pjanic lashed over the bar.

Ronaldo notched his second from the penalty spot in the 52nd minute after Clement Lenglet handled clumsily in the area, as the hosts imploded.

Antoine Griezmann, who was invisible in the first half, grazed the crossbar with a looping header from a Messi free kick, and Buffon beat out another effort, with De Ligt’s pressure enough to stop Martin Braithwaite converting the rebound.

Leonardo Bonucci had a fourth goal ruled out for offside after he tapped in Ronaldo’s effort from close range, with Messi trying in vain at the other end to answer Ronaldo, but he found the 42-year-old Buffon in his way time and time again.

Griezmann was critical of his own side after they fell to their first home Champions League group stage defeat since 2009.

“We were not good enough, they over-ran us in the first half, we lacked everything,” he told Movistar.

“A lack of attitude, desire, wanting to run, defending, attacking, everything was bad.”Barcelona goalkeeper Marc-Andre ter Stegen was also unhappy.

“There are two things, one thing is individual mistakes, and the other is how the team defends, these are different things,” he said.