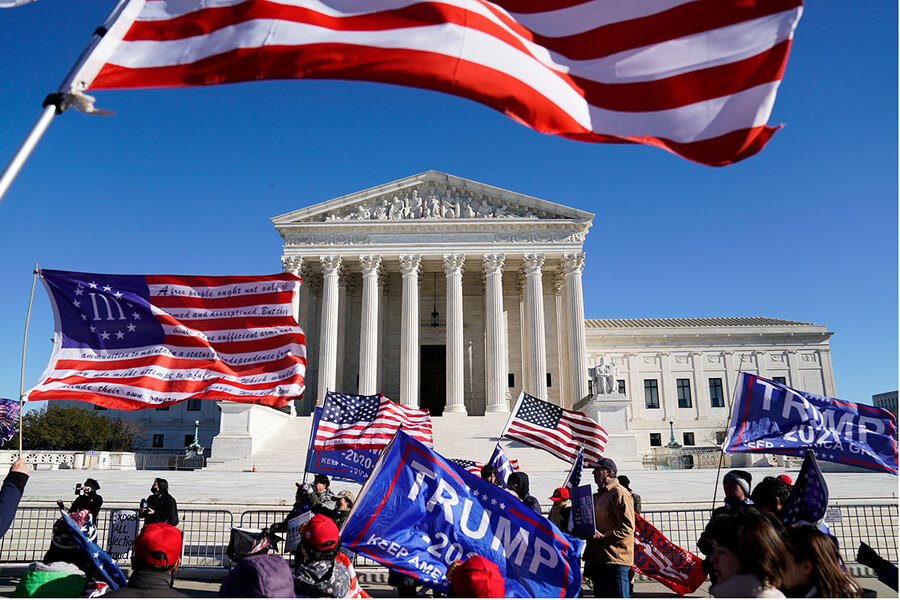 After 35 days of defeat after defeat in state and federal courts, President Donald Trump and his chorus of allies lost their 50th post-election lawsuit on Tuesday.

It was the latest of a furious five-week but so far futile legal effort to convince American judges across the nation to nullify millions of votes in six key states and declare President Trump the winner of the 2020 presidential election.

There was a certain symmetry, if not irony, in the president’s 50th loss on Tuesday, also the electoral “safe harbor day.” A feature of a dusty 19th-century law that set a deadline of sorts for lingering election disputes, the 1887 act requires Congress to count the electoral votes of states that certified their elections six days before the Electoral College meets. All but Wisconsin met that deadline, with one more case being heard Thursday.

In a terse one-sentence ruling, the United States Supreme Court, whose conservative majority will provide President Trump with one of his most enduring legacies and remains the last-gasp legal hope of those still fighting to keep the president in office, denied a Republican appeal to throw out Pennsylvania’s election. Mr. Trump and his supporters have a success rate of one minor win out of, as of Thursday, 56 rulings in cases they filed.

While it’s all but certain that the electors meeting next Monday will reflect the will of the states that chose them, the curtain has not quite been drawn on the five-week opera of American politics in the time of COVID-19, and the president’s leitmotif of election fraud.

The state of Texas filed a lawsuit against the states of Pennsylvania, Georgia, Michigan, and Wisconsin, each of which certified their tallies in favor of President-elect Joe Biden, asking the Supreme Court on Tuesday to toss out the votes of millions of Americans and directing the states’ respective legislatures to choose their slates of electors instead.

Joined by six other Republican states, the Texas lawsuit argues that since the Constitution only vests state legislatures with the authority to appoint presidential electors, any governor or state official who issued any COVID-19-related changes to election procedures would have violated the Constitution. Seventeen Republican attorneys general signed an amicus brief, and President Trump has requested to intervene in the case.

Such unconstitutional procedural changes during the pandemic, including expanded mail-in voting and extended deadlines, the Texas lawsuit also alleges, only served to relax these states’ ballot-integrity measures, triggering what it says was a host of voting irregularities and fraud.

On Thursday, 20 states, two territories, and the District of Columbia filed an amicus brief siding with the four battleground states, asking the court not to overturn the election, saying, “The people have chosen.”

Legal experts say the Texas lawsuit will meet the same fate as the other 55 failed lawsuits Republicans brought to state and federal courts over the past five weeks. For one, the lawsuit is specifically targeted to battleground states that gave a total of 62 electors to Mr. Biden. But Republican Texas Gov. Greg Abbott, too, issued executive orders “suspending certain statutes” governing the election, and extended ballot deadlines. States that joined the Texas lawsuit, including Kansas and Mississippi, also issued orders allowing mail-in ballots arriving late to be counted, even as they argue such orders in the four battleground states were unconstitutional and dangerous triggers of voter fraud.

“But hypocrisy aside, the suit is also a perfect microcosm for so many of the other cases we’ve seen filed in the past month,” wrote Steve Vladeck, professor at the University of Texas School of Law, about the Texas-led effort to invalidate millions of votes. “It is lacking in actual evidence; it is deeply cynical; it evinces stunning disrespect for both the role of the courts in our constitutional system and of the states in our elections; and it is doomed to fail.”

In dozens of similar cases brought before state and federal courts the past five weeks, judges reacted with incredulity at the claims Republican lawyers brought before them, and the sheer audacity of their efforts to disenfranchise millions of American voters.

“It’s not just Democrats who are calling these suits garbage,” says Wilfred Codrington III, professor of law at Brooklyn Law School in New York. “It’s been across the board. And I’d say that the most emphatic examples that sum up what has been going on with these lawsuits have been Republican judges.”

“[The] real stunner here is the sought-after remedy,” Judge Hagedorn wrote. “We are invited to invalidate the entire presidential election in Wisconsin by declaring it ‘null’ – yes, the whole thing. And there’s more. We should, we are told, enjoin the Wisconsin Elections Commission from certifying the election so that Wisconsin’s presidential electors can be chosen by the legislature instead, and then compel the Governor to certify those electors.

“At least no one can accuse the petitioners of timidity,” Judge Hagedorn added, noting such a remedy – a court-ordered disenfranchisement of every Wisconsin voter – would appear to be unprecedented in American history. “This petition falls far short of the kind of compelling evidence and legal support we would undoubtedly need,” he said of the Republican arguments, which were full of “glaring flaws that render the petition woefully deficient.”

In Pennsylvania, a panel of three Republican-appointed judges in the 3rd Circuit Court of Appeals, including Judge Stephanos Bibas, a member of the Federalist Society appointed by President Trump, also emphatically rejected an appeal argued in person by former New York Mayor Rudy Giuliani.

“Free, fair elections are the lifeblood of our democracy,” Judge Bibas wrote. “Charges of unfairness are serious. But calling an election unfair does not make it so. Charges require specific allegations and then proof. We have neither here.”

Even so, the Republican team led by Mr. Giuliani was seeking a “breathtaking” invalidation of millions of votes. “Its alchemy cannot transmute lead into gold,” Judge Bibas wrote. “The [Trump] Campaign never alleges that any ballot was fraudulent or cast by an illegal voter. It never alleges that any defendant treated the Trump campaign or its votes worse than it treated the Biden campaign or its votes. Calling something discrimination does not make it so.”

In public, however, Mr. Giuliani, part of the president’s self-described “elite strike force” legal team, has promised to unleash a torrent of evidence that would reach “biblical” proportions. Reverting to a more pagan analogy, lawyer Sidney Powell also famously said that she would “release the Kraken” with a four-state lawsuit that would once and for all expose widespread election malfeasance and justify tossing millions of votes in states that voted for Mr. Biden. All four of those suits have failed.

“There’s this gap between the specific arguments they’re making – or not making – in court, and the reception of the public arguments they’re presenting in public,” says Claire Finkelstein, professor of law and at the University of Pennsylvania Carey Law School. “So there’s this broader phenomenon of a large percentage of that 70 million people who voted for Donald Trump being actually convinced that the Democrats and Joe Biden have stolen the election from Donald Trump.

“But by bringing lawsuit after lawsuit after lawsuit, the GOP and Donald Trump are trying to make it look as though there really is a legitimate question about whether or not Joe Biden won the election,” says Professor Finkelstein. “And that maybe is part of an overall strategy that we’ve seen the GOP use all through the nearly four years of Donald Trump’s presidency, which is to cast confusion and doubt over things that are quite clear, so that everything seems to exist in a kind of haze of law and facts, and you don’t really know at any point sort of what happened or what’s allowed.”

An overwhelming 72% majority of Republicans, in fact, say they do not trust that the 2020 election results were accurate, according to an NPR/PBS NewsHour/Marist survey. Two-thirds of independents and 95% of Democrats say they do trust the results.

And only 27 congressional Republicans out of 249 in the House and Senate have publicly acknowledged Mr. Biden’s 7 million popular vote margin and convincing electoral victory in last month’s elections, The Washington Post reports. The majority simply will not say.

At stake: faith in American democracy

Still, Republican state election officials and other local GOP lawmakers have maintained that their elections were among the most trouble-free in recent years. Federal cybersecurity officials in the Trump administration have said the election was the most secure ever conducted. And Attorney General William Barr, a Trump loyalist, has said investigators have found no evidence of widespread fraud.

Neither has a single state or federal court over the past five weeks, despite the fact that the Trump campaign and other Republicans have had chance after chance to present evidence to support their claims – or their widely proposed remedy to disenfranchise millions of voters and have Republican legislators select state electors instead.

The sheer emptiness of the audacious and unsupported claims, Wisconsin’s conservative Supreme Court Justice said, “compelled” him to offer one last observation at the end of his decision to reject one of the more than 50 lawsuits Republicans have filed.

“Something far more fundamental than the winner of Wisconsin’s electoral votes is implicated in this case,” Judge Hagedorn wrote. “At stake, in some measure, is faith in our system of free and fair elections, a feature central to the enduring strength of our constitutional republic.

“It can be easy to blithely move on to the next case with a petition so obviously lacking, but this is sobering,” he continued. “The relief being sought by the petitioners is the most dramatic invocation of judicial power I have ever seen. … This is a dangerous path we are being asked to tread. The loss of public trust in our constitutional order resulting from the exercise of this kind of judicial power would be incalculable.”

Time to retire Person of the Year

The Constitution has an answer for seditious members of Congress