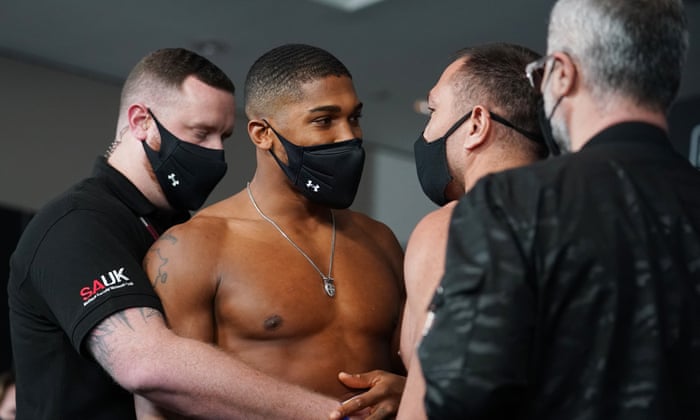 In conversation this week with a long‑retired fighter who knows his oats, the idea that Anthony Joshua could lose against Kubrat Pulev on Saturday night was dismissed as somewhere between unlikely and insane.

Reminded that the same was said in the summer of 2019 before Joshua fought Andy Ruiz Jr, Mexico’s greatest advert for cheese-packed tacos, my friend smiled. He knows there are no guarantees where the big beasts roam, whatever his inclination to dismiss Pulev as a 39-year-old underdog expected to provide stout but unthreatening resistance to the three-belt champion.

House fighters, unbeaten heavyweight prospects and ring kings in full flower do lose, sometimes to unlikely opponents, because the showcase division is not a place to make easy assumptions. And that is why the examples often cited to prove that such results are upsets – from James J Braddock beating Max Baer in 1935 to Mike Tyson falling at the feet of Buster Douglas in 1990 – should come with the qualification that a left hook thrown by a selected opponent is as dangerous as one delivered by the favourite. Or a fun-loving Mexican.

The Joshua script is written: he beats Pulev, impressively inside the distance – or even in an exciting tear‑up – rings Tyson Fury on Saturday morning, they agree to fight at least twice in 2021 and make more money than anyone in the history of the business, sharing maybe £200m or more. Joshua, in unguarded moments, is looking beyond that scenario.

Boxing and Joshua will enjoy a mutual embrace only as long as he delivers for fans persuaded to invest in watching him, and they have done so in unprecedented numbers at four stadium mega-fights, in Cardiff and Wembley. It has been a spectacularly lucrative arrangement for the champion and his associates, so there will be no dissent about the long-term strategy.

Pulev – who has been around so long he beat Matt Skelton 10 years ago, when the Bedford man was mysteriously aged, and four years before six-fight novice Joshua ended Skelton’s career – brings gnarled credibility, a chin that has never let him down and the mien of a scarily calm bouncer. But the challenger is not part of the long-term deal. That place at the table is reserved for Fury. Forget Deontay Wilder or any of the other Americans. For now, Joshua is locked into an unsigned pact with his compatriot, one which excites fans every bit as much as when they paid to see Frank Bruno and Lennox Lewis go at it in Cardiff 27 years ago.

As the architect of the Joshua phenomenon, Eddie Hearn told the BBC’s Mike Costello: “Every time AJ fights, everybody should cross their fingers.”

Pulev is here as an unwelcome guest and, if the IBF’s mandated challenger does what Ruiz did, the sound of jaws hitting the floor will echo around Wembley Arena like a snooker ball rolling off the table at the Crucible.

That’s the glory and drama of heavyweight boxing. One punch can derail large chunks of an entire industry. “We go into this fight pretty much knowing the undisputed fight [against the WBC champion Fury] is there if we can get over the final hurdle,” Hearn says.

Hearn reckons the ppv take is up 25% since lockdown, because, “You’ve got a captive audience sitting at home on their sofas, looking for things to do. The night in is the new night out.”

Joshua insists he is not doing it just for the money. He loves fighting, along with the excitement of fame and a sense of achievement – but of course he’s doing it for the money. Only fools and hardcore amateurs fight for nothing. Joshua is neither.

The pressure that counts comes not only from the Bulgarian veteran who will try to prove my ex-boxing friend wrong, but from the expectations of those sitting at ringside and watching at home. Accidentally, perhaps, this is a big fight.

There were hints of the storm to come at the weigh-in when emotions spilled over between the camps, and the fighters squared up as ritual demands.

As Hearn relates their parting exchange, Pulev called Joshua, “a pussy”, which is a bit yesterday as jibes go, to which the big man, who was banned from the Watford manor he called his own as a wild teenager, replied: “Come over here and say it.”

The fight should be better than the buildup. And Joshua should win it inside the distance.