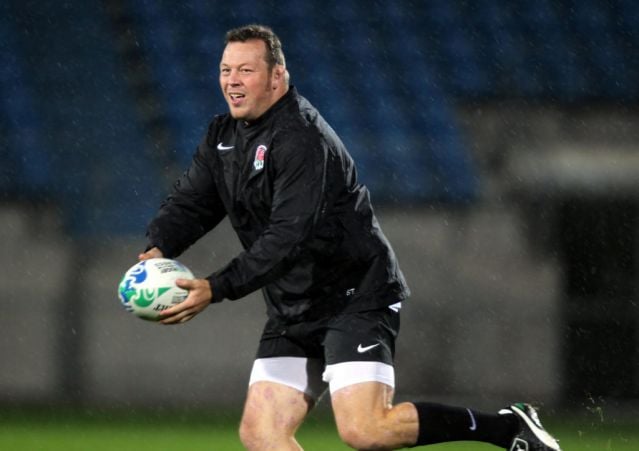 England World Cup winner Steve Thompson says he does not remember the 2003 win due to head injuries he sustained throughout his career.

A group of former international rugby players are reportedly planning legal action against World Rugby because of concussions suffered during their playing careers.

This includes former England hooker Steve Thompson, who says he doesn’t remember winning the World Cup because of the brain injuries he sustained as a player.

When talking about training he said: “It was not uncommon for me to be left dazed, seeing white spots and not knowing where I was for a few seconds, sometimes I would pass out completely.”

The planned action is against World Rugby, the Rugby Football Union and the Welsh Rugby Union, for “failure to protect [the claimants] from the risks caused by concussions”.

Players involved have come up with 15 ‘commandments’ to help make the game safer.

According to medics, a concussion is “a temporary injury to the brain caused by a bump, blow or jolt to the head. It usually only lasts up to a few days or weeks, although it sometimes needs emergency treatment and some people can have longer-lasting problems.”

Brain injuries are often difficult to get a handle on, so what are some of the common myths around concussion that are not actually true?

Myth 1: Passing out is always a sign of a concussion

“Passing out or fainting has many causes and doesn’t always mean you’re concussed,” explains Dr Daniel Cichi from Doctor4U.

“It could be a sign of low blood pressure, dehydration or lack of food, being too hot, or even overwhelming emotions can cause a person to pass out.

“However, if a person has lost consciousness after a head injury then they are likely to be concussed. Likewise, if a person were to faint for any other reason and they hit their head as they fall, they could experience a concussion as a result.”

I admire the courage of so many young international rugby stars going public with dementia diagnoses. The longer we keep the problem hidden, the longer it will take to develop solutions. #thankyou https://t.co/x8KFUqRUHw

Myth 2: You need to keep someone with a concussion awake

Many of us assume the worst thing for someone with a concussion to do is fall asleep, but Dr Cichi says: “Unless a person has neurological problems such as difficulty speaking or walking after a concussion, then it’s not necessary to keep them awake.

“In fact, resting and sleeping are advised to help a person recover from the concussion.”

However, he does note: “Staying awake does help to spot any changes in behaviour which may need to be urgently assessed.”

“Symptoms of a concussion can show within minutes or hours, but not always,” says Dr Cichi.

“In some cases, it can take a few days for symptoms to show, it may be worth having someone stay with you for a couple of days so they can spot any signs of a concussion, particularly if you’ve had quite a bad head injury. ”

"Take it seriously from the get-go."

Nicole Toole (@ConcussionBGone) wishes she knew not to rush back to play after the #concussion she suffered in 2018. She shared the symptoms she struggled with and her recovery wisdom in this week's #ConcussionHope video! pic.twitter.com/MbtQ6hxSAf

Myth 4: Concussions are only caused by blows to the head

“A concussion is a trauma to the brain and happens when the brain knocks back and forth against the skull quite forcefully,” Dr Cichi explains.

“A blow to the head can cause this, but it can also happen if your head is jolted violently such as in a car crash.”

Myth 5: You shouldn’t give painkillers to anyone with a concussion

This myth is only partly false.

Dr Cichi says: “You can take painkillers such as paracetamol or ibuprofen if you have a headache, but avoid aspirin as there is a risk it could cause the injury to bleed.”

The duration of TBI recovery is different for each and every person who experiences the injury. Take this journey to healing day by day. Don't compare yourself to anyone else, but stay the course. It truly is a journey.#ConcussionPerspective#ConcussionBeGone pic.twitter.com/vrn8Xyz3X6

Myth 6: You should avoid screens completely until you’ve recovered

“Too much screen time can make symptoms such as headaches worse; you don’t need to avoid them, but it is advised to rest and avoid any strain, and screens can strain the eyes and cause or worsen headaches,” explains Dr Cichi.

If you are concerned about your brain health or have sustained a head injury, contact your GP or call emergency services.

When the ghunguroos fell silent

The many colors of chicken soup

Preparing for the mind games