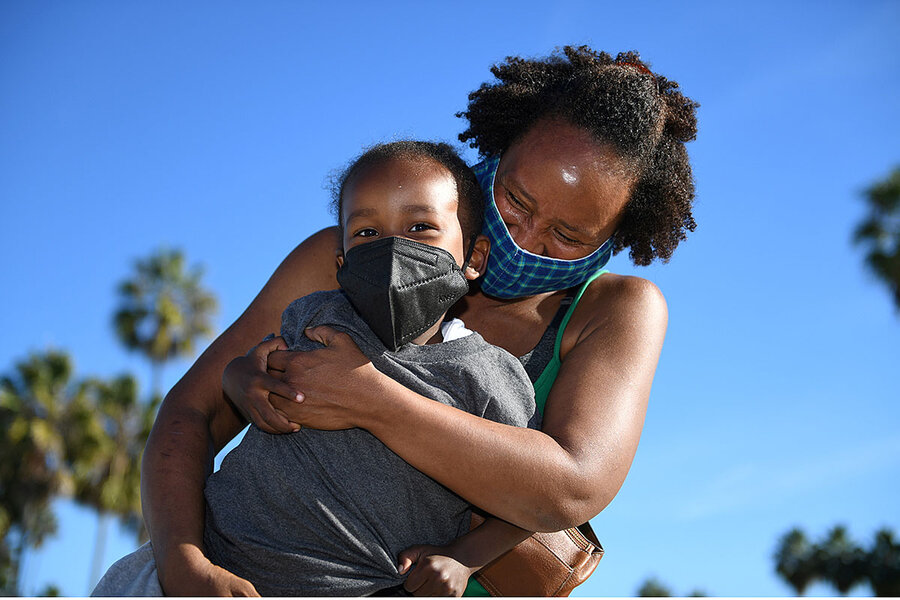 A public defender in San Diego marvels at the resolve of her clients. A doctor in Providence, Rhode Island, draws strength from the stamina of her emergency room colleagues. A bookstore owner in Minneapolis gives thanks for the loyalty of his customers. A middle school teacher in Los Angeles cherishes the enthusiasm of her students.

Nine months into the coronavirus pandemic, as the number of cases soars, the economy sputters, and everyday life refuses to come unstuck, they face the same obvious yet complicated question that shadows each of us: Where does a person find hope?

Their answers, if varying in details, revolve around the common theme of connection. Our daily interactions – deprived of spontaneity and typically filtered through masks, Zoom, or both – remain a source of reassurance as the uncertain present lurches toward a blurred future.

“There is a sense of being in the foxhole together,” says Dr. Megan Ranney, an emergency physician at Brown University in Providence, referring to her fellow health care workers. “It sometimes feels like we’re in a war for our patients and for ourselves. That tightens the bond.”

Still, even for the most resilient among us, persevering week after week in our socially distant existence poses a struggle as another round of stay-at-home orders hits several states. The country’s vast political divide further inflames our grievances as officials at every level send conflicting messages about the pandemic, giving rise to personal distrust and, at times, public animosity.

The damage inflicted to the spirit and a loss of faith in others can contribute to people experiencing moral injury. Mental health experts describe the condition as a “wound to the soul” that exhausts an individual’s emotional reserves and provokes intense doubts about life’s worth.

Mending that internal rupture requires a deliberate effort to reassess our expectations and search for purpose as we await the post-pandemic era, says Dr. Wendy Dean, a psychiatrist and co-founder of the nonprofit group Moral Injury of Healthcare.

“All of us have the need to feel normal,” she says. “But we’re continuing to demand as much of ourselves as we did before – to be the perfect parent, the perfect worker, the perfect student. People have to find a way to have forgiveness for themselves and recognize that they’re doing the very best they can.”

Dr. Ranney has learned to downshift from the 18-hour workdays she pulled during the early months of the outbreak. Yet as cases spike again, the vitriol aimed at doctors and nurses by those who question the severity of the disease – or its existence – marks an unsettling contrast to spring, when the country united in lauding front-line responders.

“It’s a very dark, difficult time for health care workers, who are working at the edge of their physical and emotional capacity,” she says. More than 1,400 providers have died from the coronavirus, and thousands more have chosen to leave the profession. “It sometimes feels like we’re the Little Dutch Boy. We’re trying to keep our finger in the dike to stop that dam from breaking – and now we’re having tomatoes thrown at us and being told we’re making this up.”

Moral injury, a term most often linked to veterans of military conflict, occurs when individuals commit, fail to prevent, or witness an act that violates their ethical beliefs, or when those in positions of authority betray their trust. The behavioral, emotional, or psychological toll that lingers can at once distort self-identity and sow suspicion or disdain of others.

A new report from National Nurses United examines risk factors for moral injury among medical providers as the pandemic drags on. The list includes inadequate preparation by and support from government agencies and health care employers, lack of social support, and emotional trauma related to the deaths of patients.

Beyond the failures of public and hospital officials, the backlash from large numbers of Americans and limits on hospital visits deepen the plight of providers, who act as proxies for the loved ones of patients stricken by the virus.

“The feeling of betrayal is one thing,” Dr. Dean says. “But there’s also this feeling of ‘I can’t do it all. I can’t pull this train by myself.’ We’re asking them to take care of people where prevention has fallen short – and in some cases has been ignored – and we’re also asking them to bear witness for all of us.”

Dr. Ranney seeks to ease her unseen burdens through public advocacy and private diversions. She serves as a medical analyst for CNN, offering insight into the hardships of front-line responders, and works with Get Us PPE, a nonprofit she co-founded that provides free personal protective equipment to medical organizations.

The mother of two young children, she exhales at home by watching “The Mandalorian” with her son and “Gilmore Girls” with her daughter, and by taking occasional turns on the family trampoline. Weekend hikes with her husband and kids allow her to briefly slip free of anxiety’s orbit.

The perils and pressures of work aside, Dr. Ranney nurtures a cautious optimism, encouraged by the prospect of a vaccine and a cohesive pandemic plan from President-elect Joe Biden. “This is the most urgent public health crisis of our time,” she says. “I’m honored I get to do what I do. It is an absolute privilege.”

A similar sense of dedication and gratitude sustains Dr. Jessica Lu, a third-year family medical resident at University of Washington Medicine, a health care network in Seattle. Many of her patients live in nursing homes, and while safety measures preclude in-person visits with most of them, Zoom calls enable her to alleviate their social isolation.

“From the beginning of the pandemic, I’ve recognized how fortunate I am to do the job I’m doing,” she says. “That kind of satisfaction keeps me going.”

Dr. Lu holds measured hope that the country’s ordeal might persuade coronavirus skeptics to discard “brute individualism” as a public health policy. “What I think the pandemic has shown above all is you have to take care of each other,” she says. “We’re all connected.”

A recent exchange with a patient illustrated that principle in an unexpected way. She asked a few questions of the young woman, who answered all of them – and then flipped the script. “Hey, Dr. Lu,” she said, “how are you doing?”

Her evident sincerity touched the doctor. “Every day I’m looking for one good thing that happens, one little kernel of joy,” she says. “That’s how we get through this.”

Tatiana Kline abides by the ethos of empathy in her role as a deputy public defender in San Diego. The pandemic prevents her and her colleagues from meeting with clients, who languish behind bars as courts delay hearings and trials, increasing their risk of exposure. An estimated 227,000 inmates in jails and prisons nationwide have contracted COVID-19, and nearly 1,600 have died.

“The biggest hurdle is not having face-to-face access to our clients,” she says. Most of her conversations with them now occur via video conference and phone calls. “You miss having that personal touch – shaking hands, looking them in the eye – because that helps make them feel human in a system that doesn’t treat them that way.”

When Ms. Kline realized earlier this year that colleagues shared her frustration, she started a virtual wellness program, creating a space for them to discuss their concerns and methods for coping. The conversations serve to reaffirm their devotion to aiding clients, most of whom live along the socioeconomic margins, and she intends to continue the program after the office reopens.

“Almost everybody feels like they’re in limbo right now,” she says. “This is a way to help us keep going forward and advocating for the people we represent.”

The virtue of persistence

A desire to persist motivates Jamie Schwesnedl, who with his wife, Angela, owns Moon Palace Books in Minneapolis. The shop stands a block from a police station that rioters burned down in the aftermath of George Floyd’s death at the hands of officers on Memorial Day.

During the demonstrations, Mr. Schwesnedl and his employees posted a large sign in the store’s upper windows that read “Abolish The Police,” a signal of their support for the community. Moon Palace escaped the charred fate of dozens of nearby businesses that remain in ruins, and the neighborhood has rallied to the shop’s cause. The Schwesnedls, while forced to cut their staff from 41 to 12, have weathered the dual blows of the pandemic and protests on the strength of online sales and takeout orders from the store’s cafe.

“People with small businesses are asking themselves, ‘Should I keep doing this or should I completely reevaluate my life?’” Mr. Schwesnedl says. He laughs before adding, “But you don’t have a chance to think about it because you’re trying to keep your business afloat.”

Beneath his dark humor lies an economic horror story. One recent study found that more than 420,000 small businesses closed nationwide between March and mid-July. A Harvard University database shows that 29% of the country’s small businesses have shut down since January.

Mr. Schwesnedl knows that, without healthy holiday sales and new federal stimulus funding, Moon Palace might join the ranks of defunct bookstores. “But we’re doing what we love,” he says, “and the idea that things could improve in 2021 has helped keep us going.” He laughs again. “Besides, what are the options?”

His cleareyed outlook aligns with Michele Levin’s view on adapting to pandemic upheaval. She teaches science to seventh- and eighth-graders at Daniel Webster Middle School in Los Angeles, and since switching to online classes, she has found her students more attentive and engaged. At the same time, the discretion of private messages has reduced their reluctance to share personal troubles with her, giving her a chance to enlist counselors or tutors when necessary.

“What I’ve seen with being online is that it’s a very equal setting that’s less scary for a lot of them,” she says. “It’s helping build their confidence.”

Early research into remote learning draws less promising conclusions, with studies suggesting that online instruction could magnify disparities in academic performance and cause students to lose as much as 12 months of learning by the end of this school year.

Ms. Levin, a teacher for more than three decades, understands that the pandemic presents academic and emotional obstacles for her students. When they raise questions about the outbreak, she tends to respond with answers grounded in science, discussing progress on a vaccine or the public health rationale for wearing masks.

On other occasions, if she detects a collective unease, she might propose a virtual group hike to soothe their anxieties, and the class will set off online through a forest or along a river.

Now she’s just waiting for the science to catch up with the optimism.

Time to retire Person of the Year