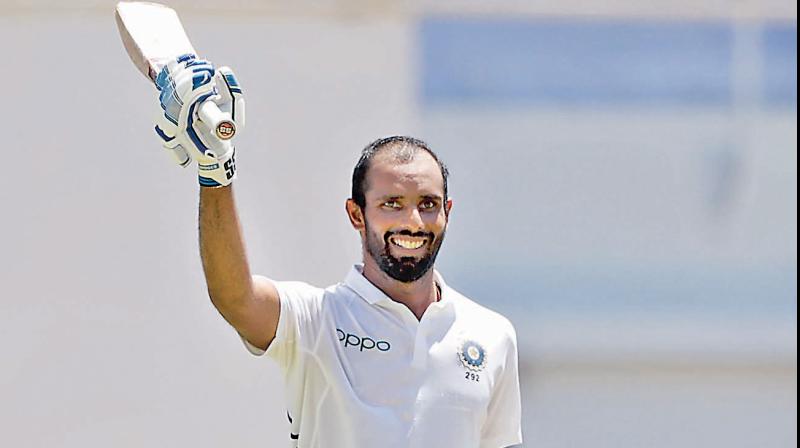 Sydney: A second spinner in Kuldeep Yadav or an additional batsman in Hanuma Vihari will be India’s prime concern during their day/night first-class game against Australia A from Friday which would be the dress rehearsal for the ‘Pink Ball Test’ in Adelaide, starting December 17.

The three-day game at the floodlight Sydney Cricket Ground will serve as proper simulation for the opening Test but the flat batting track here may not exactly be conducive for preparation considering that Adelaide Oval curator Damian Hough, according to Ian Chappell, will leave around 10mm grass cover on the strip.

The match, which will be streamed live, may not feature skipper Virat Kohli, who has hinted that he wants to go on with his own preparation routine before the “Battle Royale”.

It could also be a tactical move to ensure that the Australians do not get a sneak peek at his long format preparation.

“Playing it on and off is not my thing and I like to play the full game. I will talk to our physio and then decide on my participation,” Kohli had said after the completion of the T20 series.

For Australia, new sensation Cameron Green will get another chance to impress skipper Tim Paine and coach Justin Langer while Mitchell Swepson would hope that when the third Test is played at the SCG in the New Year, he is in consideration.

Save Ajinkya Rahane and Cheteshwar Pujara in the first essay and Wriddhiman Saha’s dour fifty in the second innings, there wasn’t much to write home about for India in the opening first-class encounter.

So, this will be the visitors’ chance to sort out the combinations, including a decision on whether the 36-Test experience of KL Rahul will gain precedence while opening with Mayank Agarwal, who is a certainty.

Considering Prithvi Shaw’s loose technique against quality seam and swing bowling and Shubman Gill still trying to find his feet at the top level, Kohli and head coach Ravi Shastri, at least in the first Test, would like to bank on experience.

Similarly, the other question would be whether India can afford to go into the Test carrying five specialist bowlers with perhaps an extra spinner in Kuldeep Yadav.

Kuldeep, among all the players in this team, has more experience of playing with pink ball and the kind of revolution he produces, he could make it difficult for batsmen to spot the black seam of the pink kookaburra under lights.

At least India’s domestic batsmen faced that ordeal against Kuldeep in the first D/N Duleep Trophy held at Greater Noida in 2016-17.

But in that case, whether it is Wriddhiman Saha or Rishabh Pant, they would have to bat at No.6 and ideally against the second new ball.

Shastri had said in New Zealand that in overseas conditions, they look at Pant’s batting expertise but the burly keeper-batsman has since lost confidence of the top brass along with his place in white ball squads.

If India give Pant, who has managed to shed the extra flab at training, a go in the second game, that could be a fair indication of the team management’s preference for the opening Test.

In case of a conservative approach, the four bowlers will be Jasprit Bumrah, Mohammed Shami, Umesh Yadav and Ravichandran Ashwin.

Hanuma Vihari would then be expected to chip in with his part time off-breaks before the second new ball is taken.

Navdeep Saini was pretty disappointing in the ODIs but India’s fastest bowler could get a game looking ahead at the remaining matches of the series.