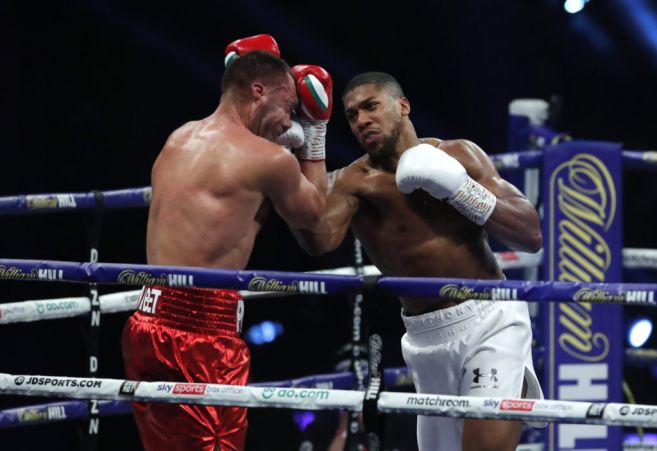 Anthony Joshua was happy to let his boxing do the talking on Saturday after he secured a stunning ninth-round stoppage over Kubrat Pulev to remain on course for a 2021 meeting with Tyson Fury.

In the ring for the first time in 12 months, rustiness was one of many potential problems for the WBA, WBO, IBF and IBO belt-holder ahead of Saturday night’s fight.

With Joshua’s shock defeat to Andy Ruiz Jr in June last year still a fresh memory, Pulev stated he was out to take the world heavyweight champion’s crown and prevent the dream twin-clash with fellow Briton Fury next year.

It proved to be merely talk and even though the Bulgarian showed admirable durability to get off the deck three times, he eventually slumped to defeat following a lethal left-right combination from the 31-year-old Joshua, who is now 24-1.

“I started this game in 2013, I have been chasing all the belts, I’ve been dealing with mandatories, so of course I want a challenge,” Joshua told the fans inside Wembley’s SSE Arena.

“For me I stuck to what I know best – boxing, looking at where I am going to put my shots and putting them together.

Joshua’s uppercut did the most damage to Pulev and on more than one occasion made him topple like a stack of blocks in Jenga – the game the Sofia-born boxer played regularly during his time in Matchroom’s bio-secure bubble at the Hilton Hotel.

When he was not goofing around, the 39-year-old was preparing for his second shot at the world title – after losing to Wladimir Klitschko in 2014 – and the chance to fulfil the wish of his late father, who dreamed of a world heavyweight champion son.

After much mutual respect in the week, a fiery weigh-in on Friday reshaped the battle line, with Joshua warning the veteran then that he needed to talk less.

Pulev insisted come Saturday “the new” would be heard inside an arena, which hosted 1,000 spectators in the first UK boxing event to have fans in attendance since March.

In the end, what was seen on more than one occasion was the mandatory challenger hitting the deck – twice in the third round and again in the ninth.

After he rose again, Joshua did finally land the knockout punch with a slick combination to add a second loss to his opponent’s record.

Back in Saudi Arabia 12 months ago, the Watford-born fighter had displayed a discipline not seen before to wrestle back his belts off Ruiz Jr, but this was a return to past glories with one more deadly finish to put on the list.

Joshua’s knockout record now stands at 22 from 25 bouts. It is a hugely impressive ratio and yet there was an added level of maturity about his display at Wembley Stadium’s sister venue of the SSE Arena.

He could have gone for the kill and overcommitted in the middle rounds after an explosive third, but stayed patient and eventually his chance came with Pulev barely able to register a legitimate punch in the contest.

Next up could and should be WBC holder Tyson Fury, who said on social media: “I want the fight, I want the fight next and I will knock him out inside three rounds.”

Joshua told DAZN Boxing: “Respect to Tyson Fury, he is a talented guy, got loads of fans and he will make for good competition when the time is ready.”

Eddie Hearn, Joshua’s promoter, wants it, the two boxers do and so does Bob Arum, who represents the Gypsy King.

Hurdles in the way include WBO mandatory challenger Oleksandr Usyk and a trilogy between Fury and Deontay Wilder if it is enforced.

But the consensus is the ‘Battle of Britain’ will be set up next.

A principle agreement has been in place since the summer and with all four key figures ready to strike a deal, one of the biggest fights in British boxing history is on the horizon.