The main material that the master used to make this kitchen is plywood. The kitchen was cheap to make, but it looks pretty decent. By the way, in this kitchen, the master implemented several ideas, and these ideas are probably even more interesting than the manufacture of cabinets. Moreover, some of them can be realized in a ready-made kitchen.
Tools and materials:
– Circular saw;
– Cordless drill;
– Electric jigsaw;
– Miter saw;
-Rule;
-Roulette;
-Marker;
-Painting brush;
-Plywood 18 mm (for the case);
-Plywood 12 mm (for boxes);
-Adjustable furniture legs;
-Guides for boxes;
-Handles;
-Paint/oil/finishing varnish;
-Fasteners; 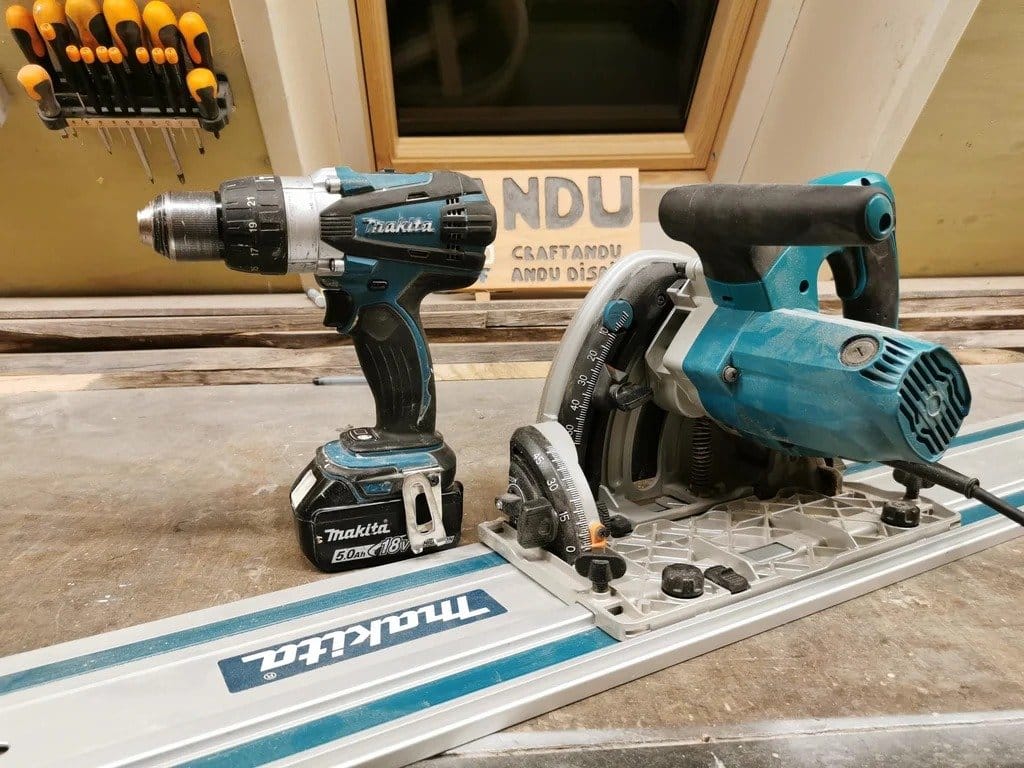 Step one: wireframe
First you need to cut the material. Typical height of the kitchen surface (table) is 900 mm. The craftsman deducted the thickness of the table top (30 mm) and the height of the adjustable legs (100 mm) and got 770 mm. In this case, the countertop was already in place and two sinks were installed. It was necessary to build a kitchen around already partially finished parts. Garbage containers will need to be installed under the sink. To the right of the trash cans is the dishwasher, to the left is the space for drawers and a corner section.
The craftsman measured and cut out the details. The frame was assembled with screws. I didn't use wood glue. 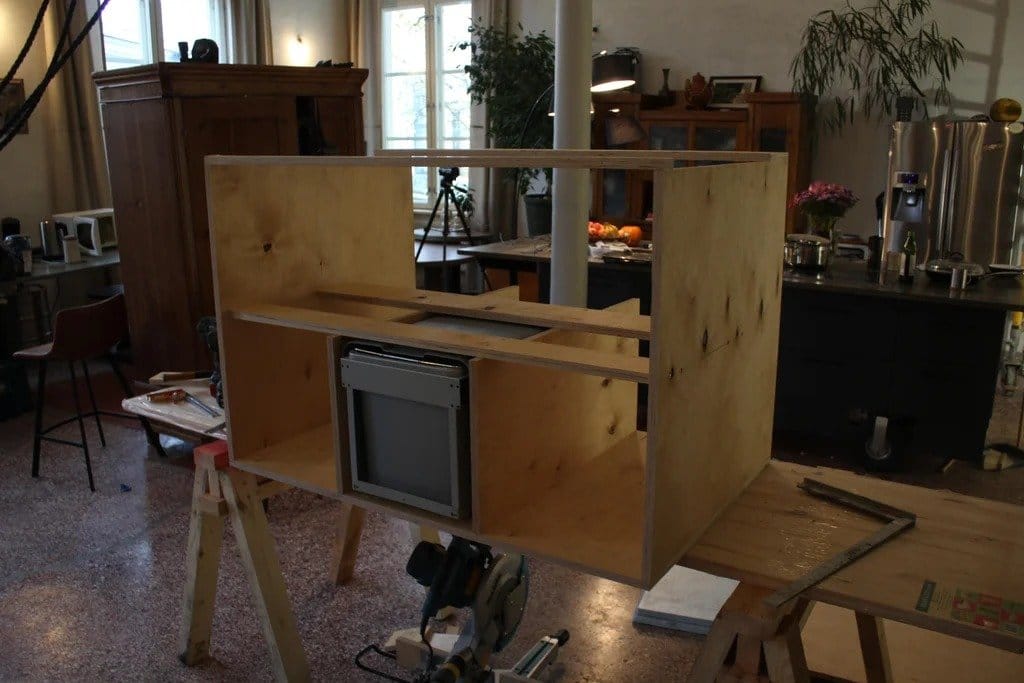 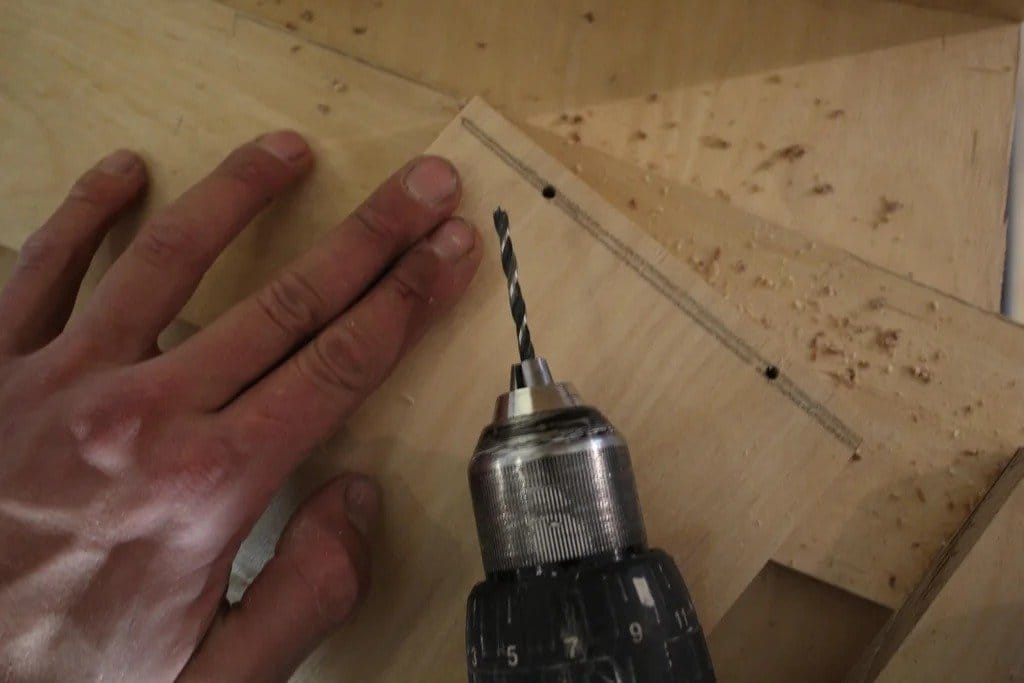 Step two: making boxes
There is nothing difficult about assembling boxes. When calculating the width of the drawer, measure the opening and subtract twice the thickness of the rails. In my case, it was 2X13 mm. First he assembles the drawer frame, then screws the bottom.
When installing the rails in the cabinet, it is recommended to make spacers so that all the rails are parallel. On the side walls of the box, he attaches the guides exactly in the middle. 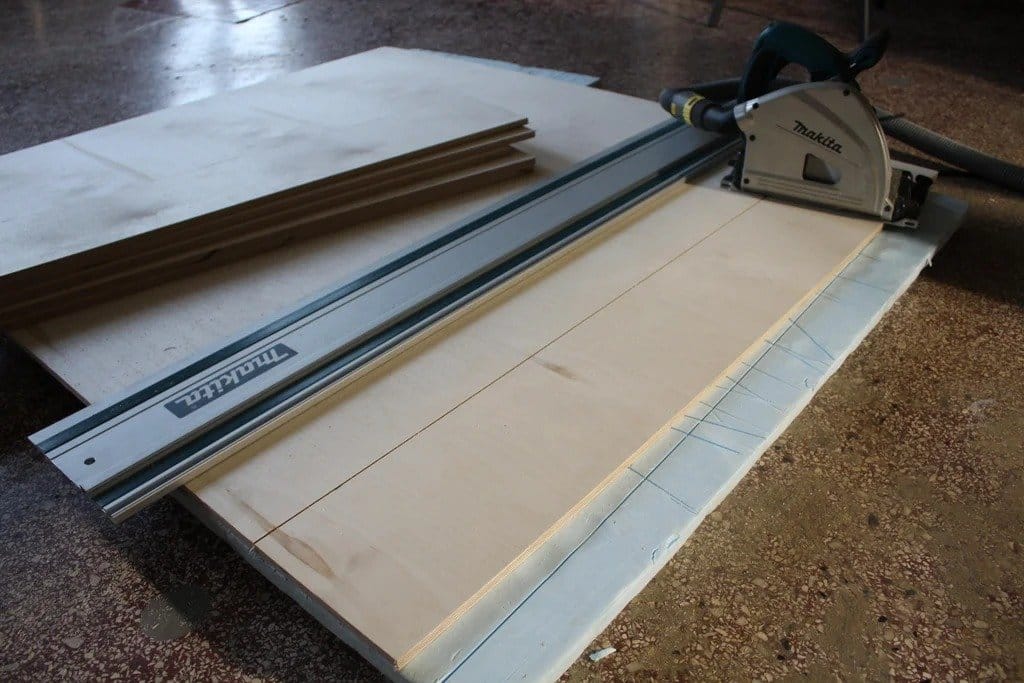 Then I cut out and fixed the front boards of the boxes. 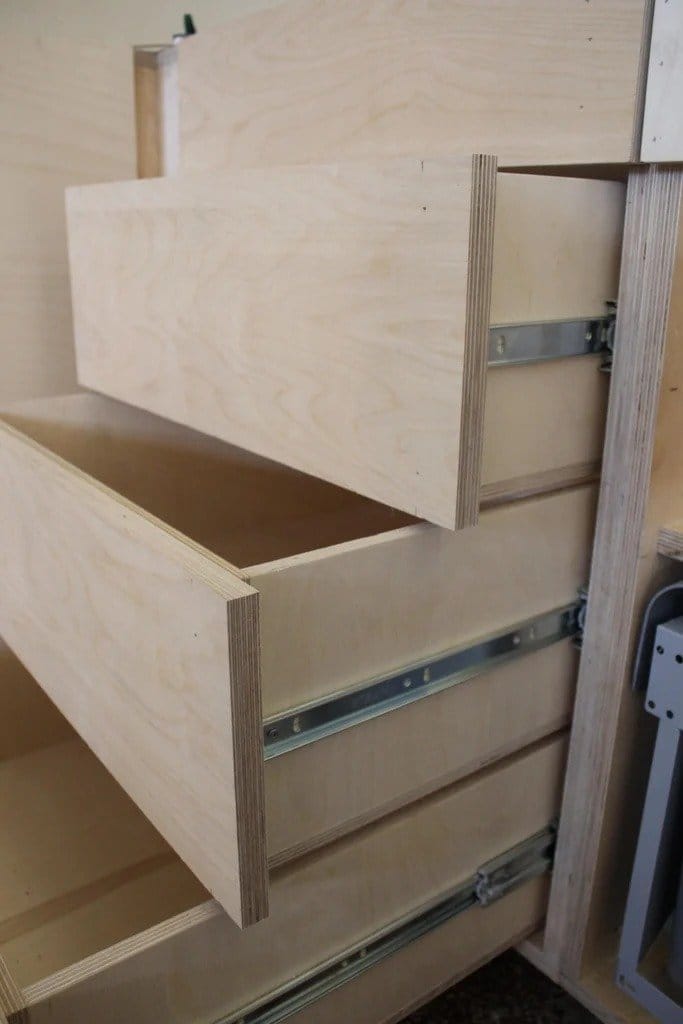 Step Three: Doors
Cut out and hung the doors. 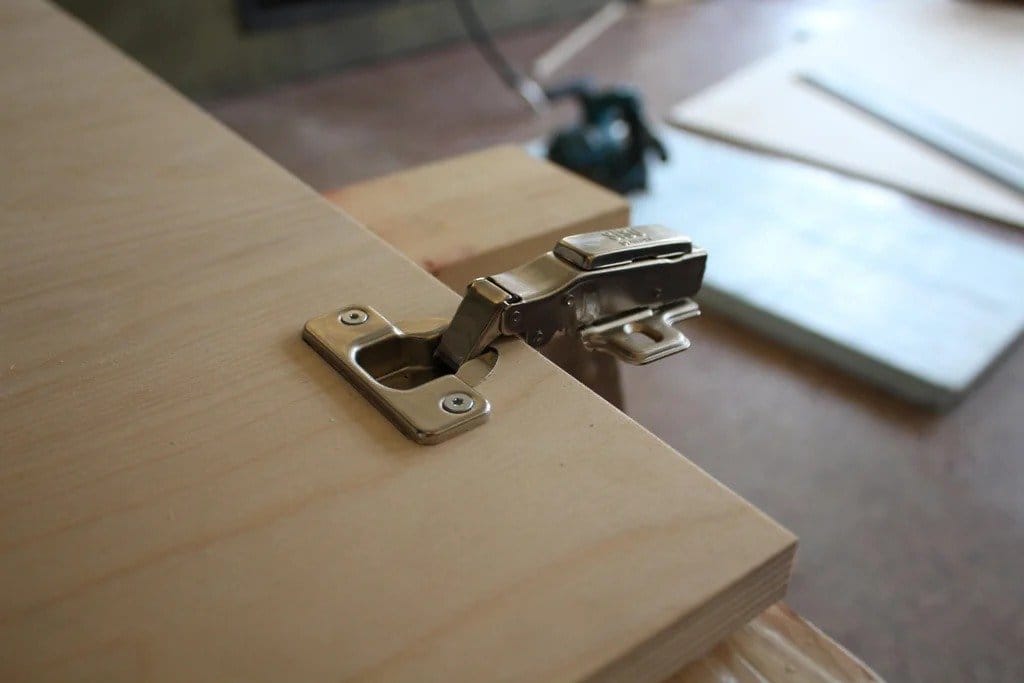 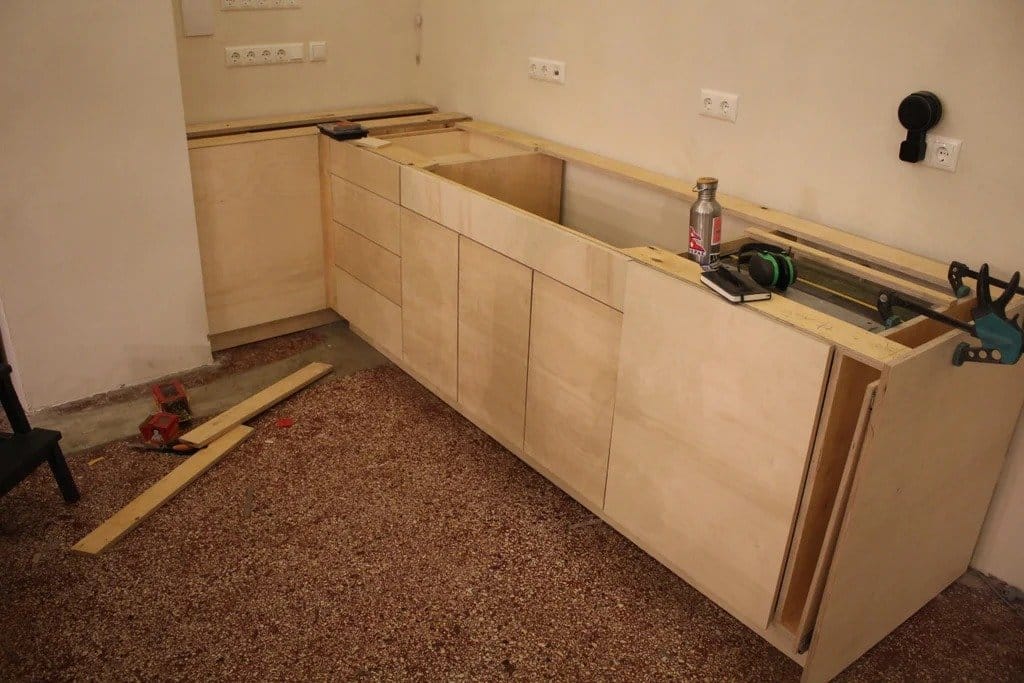 Step four: interesting ideas
In this kitchen, the master has implemented several interesting ideas. The first idea is a box in a box.
The point is to install a smaller box inside one of the boxes. The master screwed metal guides onto the walls of the larger box from the inside. Then I made the box smaller, so that it could fit between the guides, it was smaller in length than a large box, and there should be space between the boxes in width. I screwed plywood strips to the top of the inner drawer. They will play the role of runners and will cover the metal guides. Thus, it will be difficult to understand that there is free space below.
To prevent the inner drawer from moving when the main drawer was closed/opened, he installed a furniture magnet. 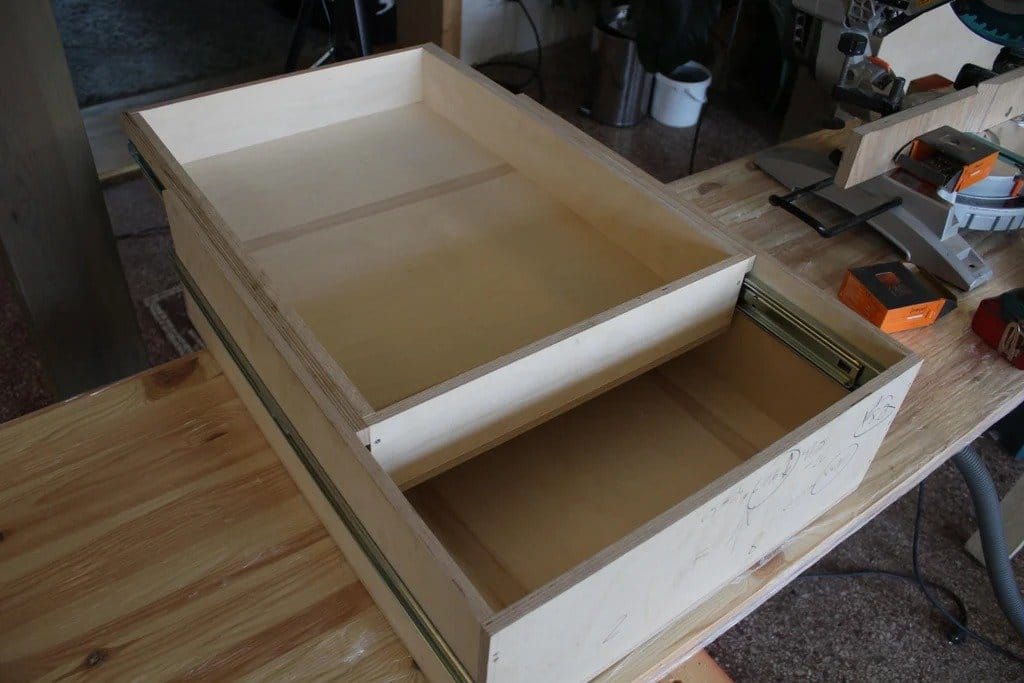 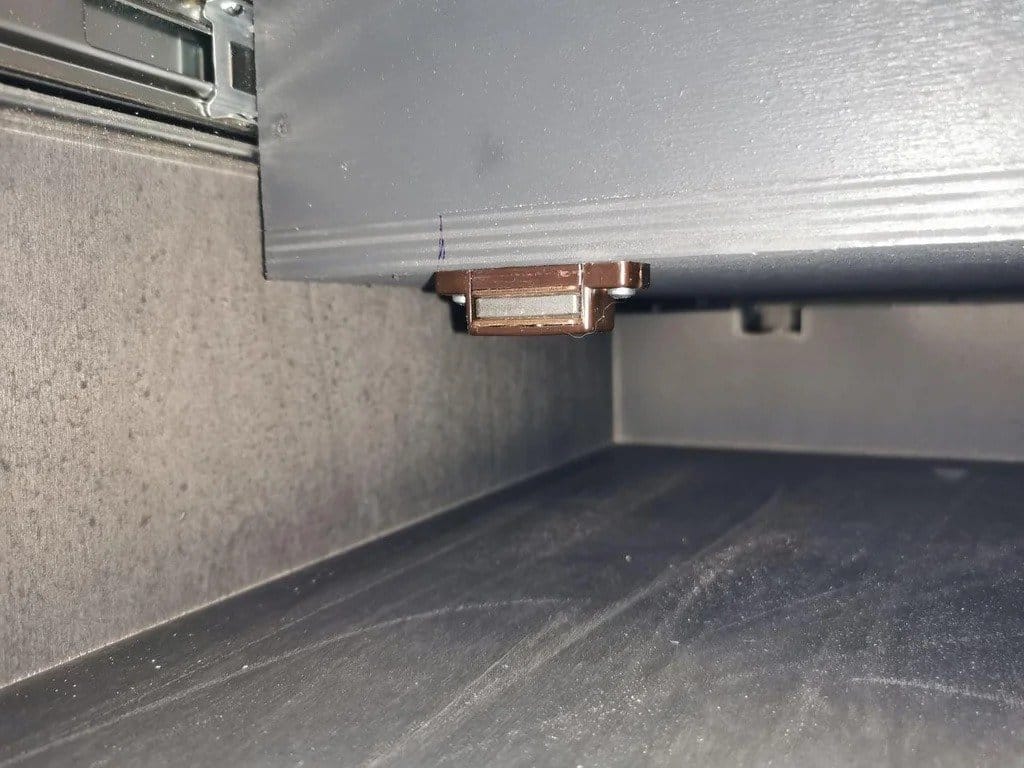 The second very interesting idea is the vegetable drawer. According to the master, this is his personal idea and he has not seen this anywhere else.
The idea is to install two guides on one of the walls, one at the top, the other at the bottom. Then cut out a false wall from plywood, which will slide on the guides parallel to the main wall. Three plywood boxes are attached to this false wall. Mounting method – French suspension. These are two oblique slats at 45 degrees, one fixed on the wall, the other on a suspended object.
You can put vegetables or fruits in the drawers and, if necessary, you can pull out all drawers together with a false wall or each separately. 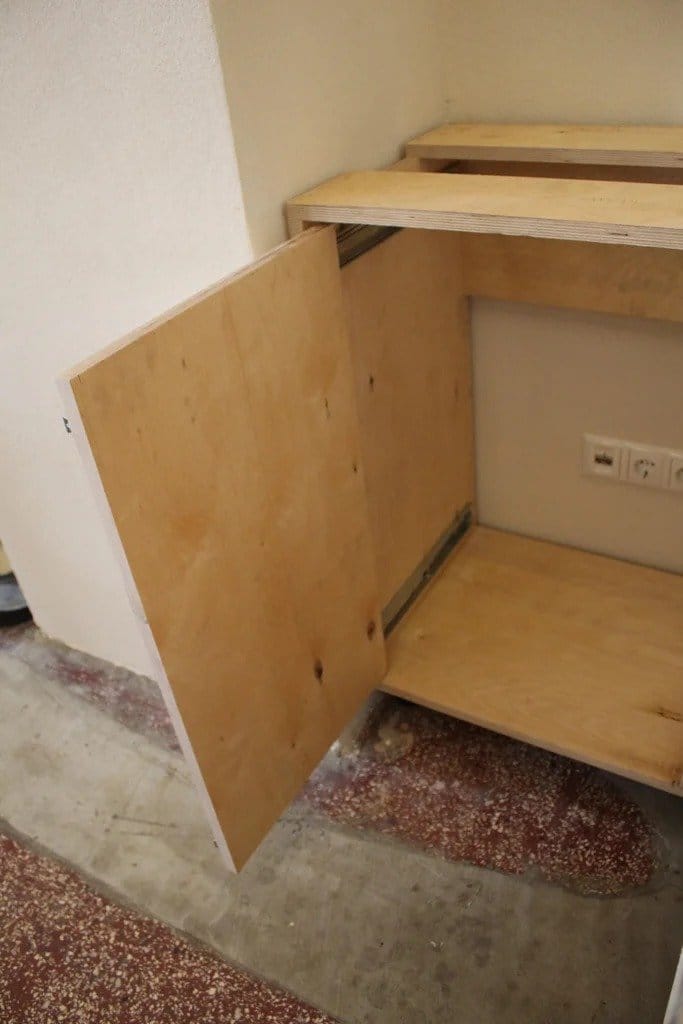 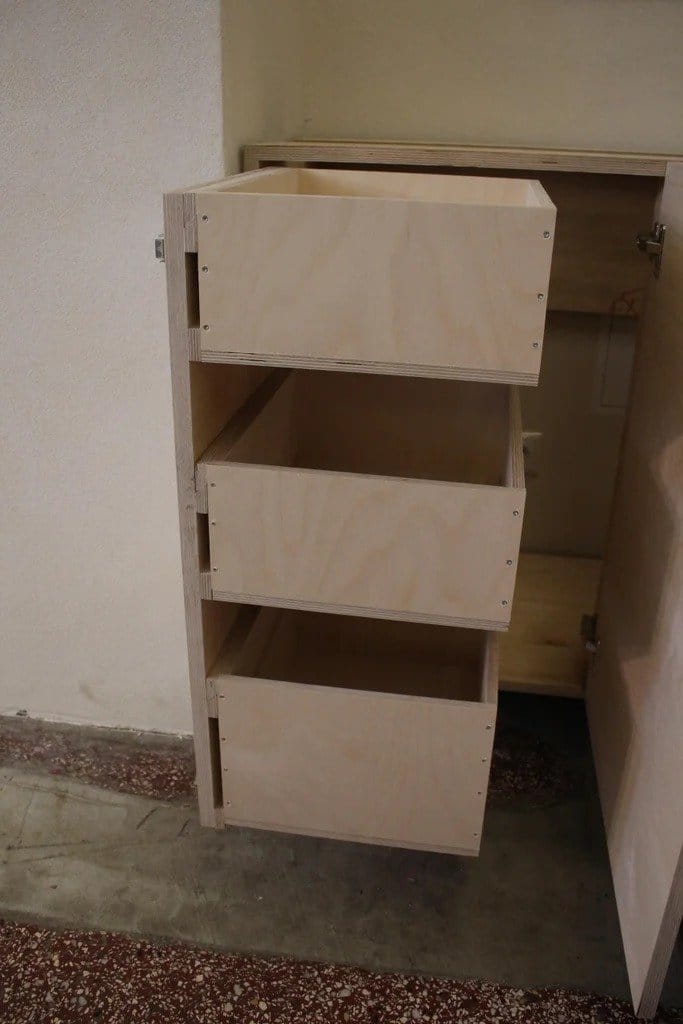 The third idea is a trash can for bottles and cans.
The master lives in Estonia and for each bottle handed over, he is entitled to 0.1 euros. This encourages separate waste collection.
The idea is to cut a round hole in the countertop, and make a suspension from the bottom on which the garbage bag is attached. 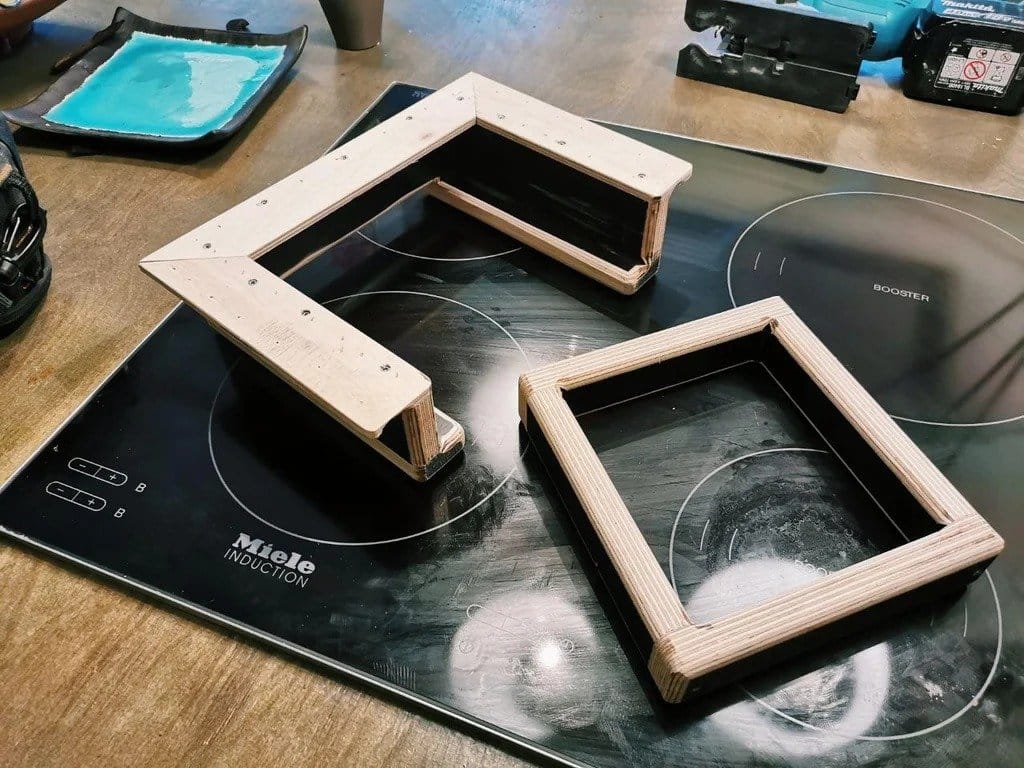 Another idea, the fourth in a row, is the spice boxes. They are attached to the inside of the swing door. 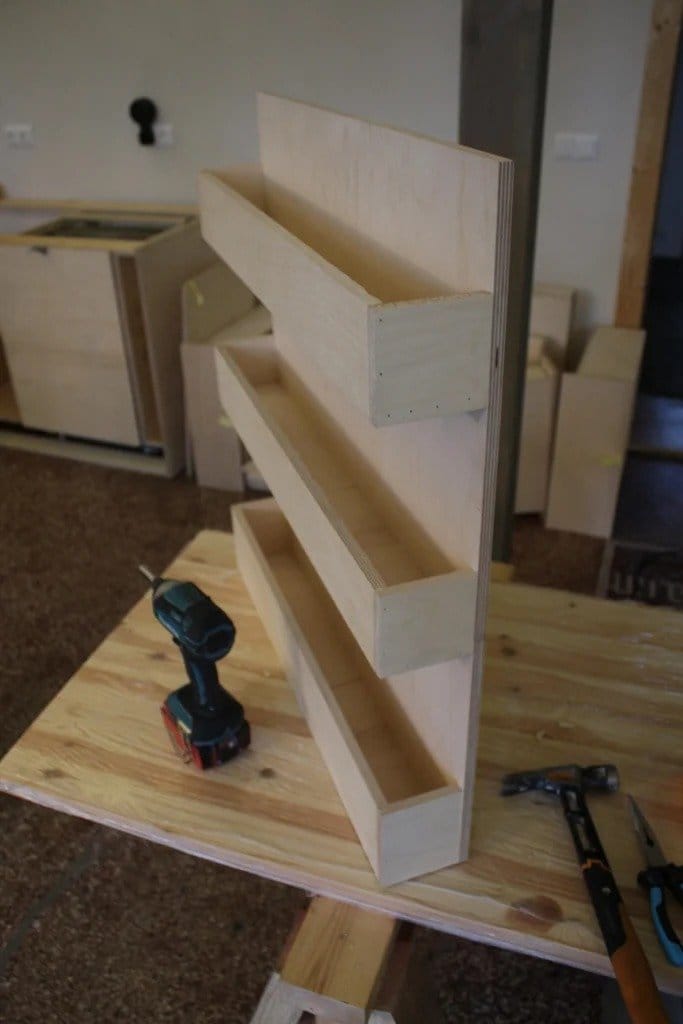 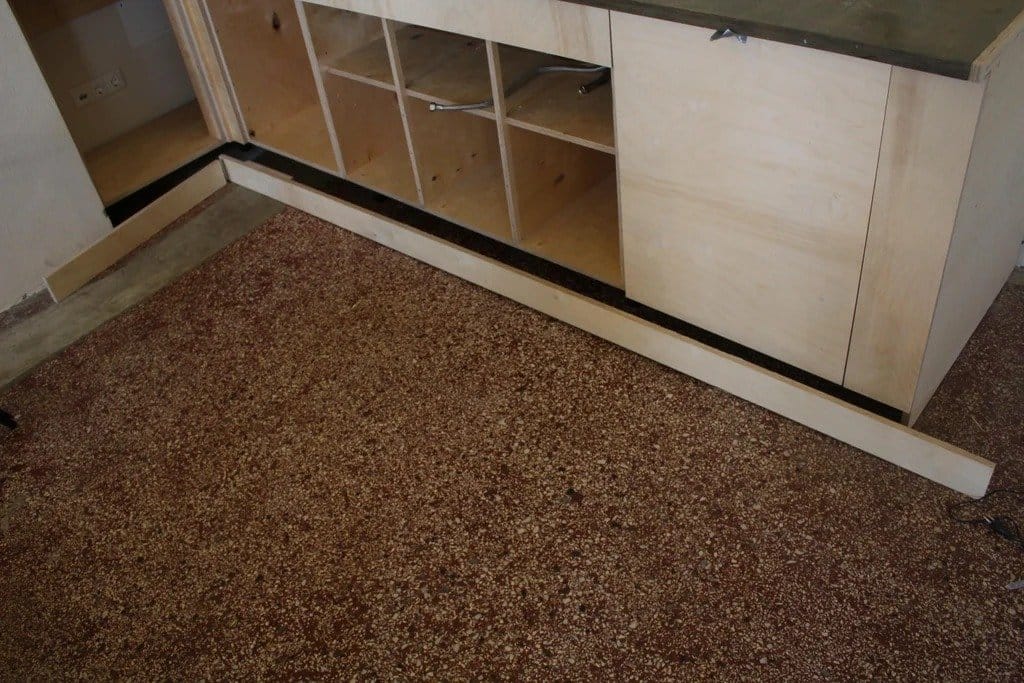 And finally, the last thing that the master came up with also relates to recycling and separate collection of waste. He has set up some dustbins in the lower compartment.
Step five: painting
After making all the parts, the master removed the guides, sanded and painted the plywood. 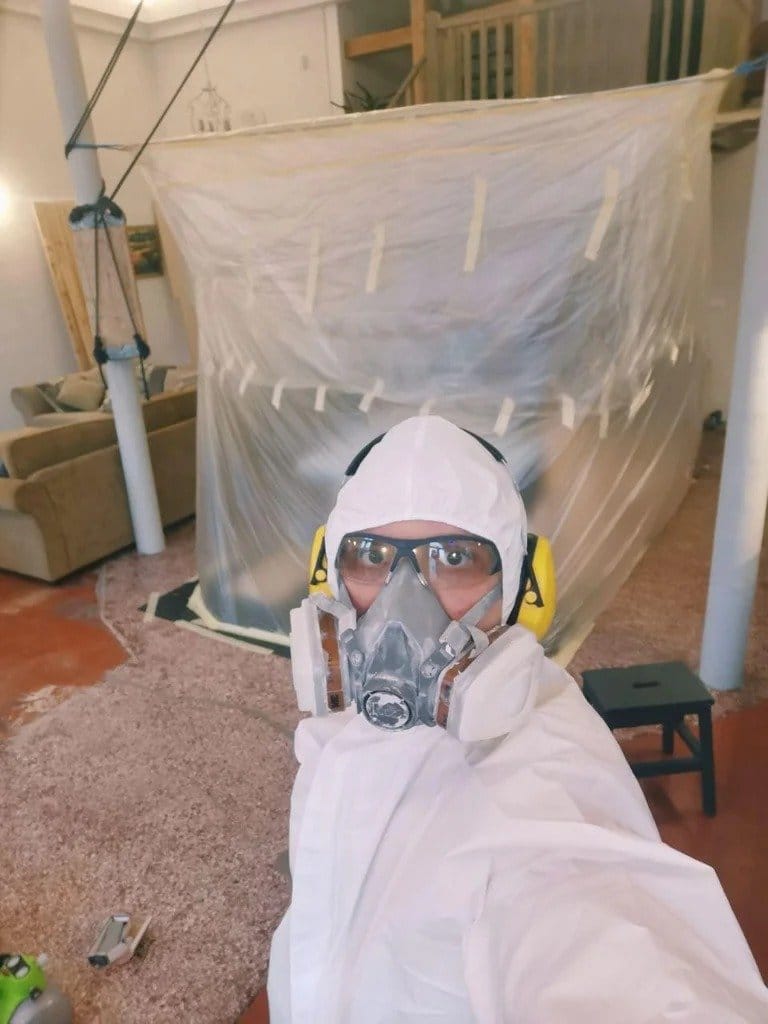 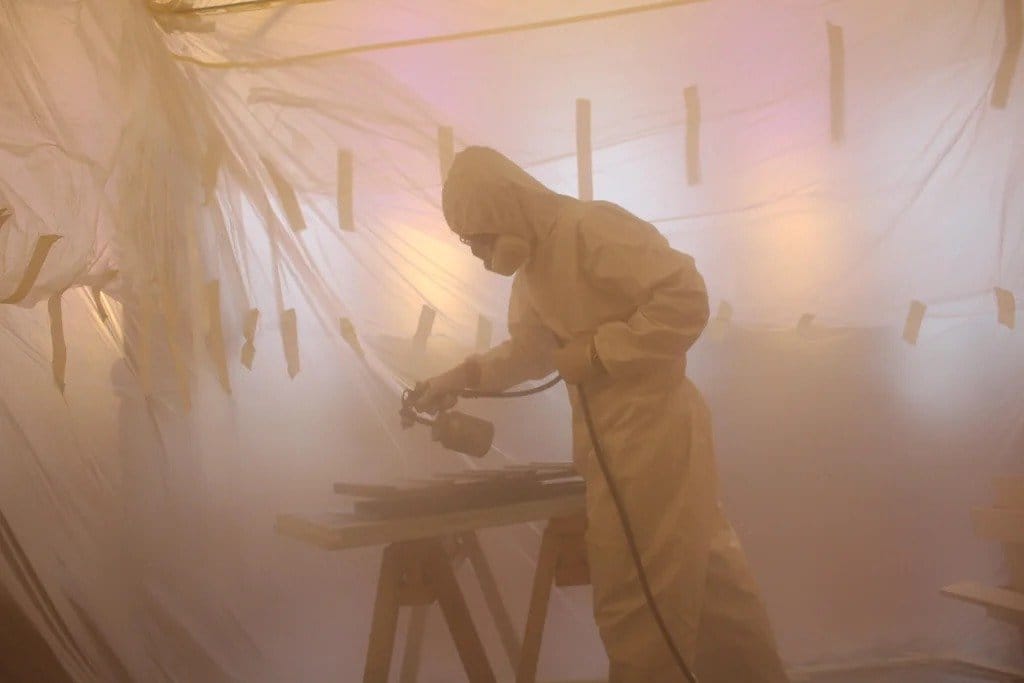