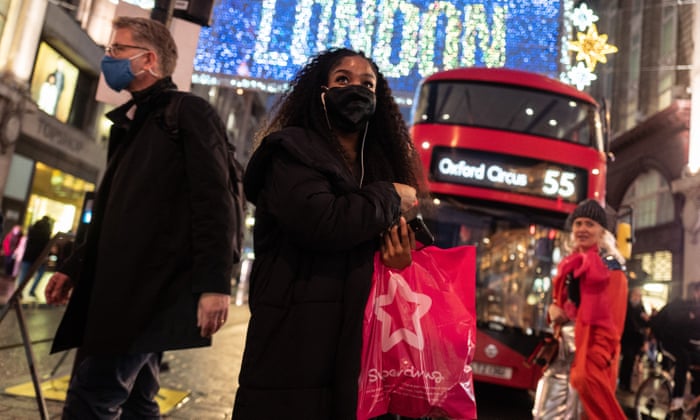 Relaxations in coronavirus rules over Christmas should not be “misinterpreted” and people should do “the minimum that is possible” over the festive period, a cabinet minister has said.

Under recently announced plans, up to three households will be permitted to meet for five days over Christmas. But urgent talks are said to be under way in Whitehall following the emergence of a new Covid variant and the decision to place London and parts of Essex and Hertfordshire under tighter tier 3 restrictions from midnight on Tuesday.

Asked if the Christmas easing of restrictions was under review, Stephen Barclay, the chief secretary to the Treasury, said: “All things are always kept under review.”

He added: “There is a balance to be struck that many families have not seen each other all year. It’s important for people’s wellbeing, for their mental health. We don’t want to criminalise people for coming together over Christmas.

“But it’s important that people do the minimum that is possible. So people will be making their own judgments,” he told Sky News.

More than 60% of England’s population – about 34 million people – will be under the tightest tier 3 restrictions from midnight, meaning eating out and socialising indoors or in private gardens is banned.

The London mayor, Sadiq Khan, called on the government to look again at the easing of rules over Christmas. “We heard from [health secretary] Matt Hancock yesterday that it appears the government is looking at this again. I would encourage them to do so if they are.

“The concern is this – the rules have been relaxed for five days, allowing household mixing for up to three different households and inevitably when people are in their own households, they tend to be less vigilant.

“And my concern is that many people may have the virus and not realise it. They could pass the virus on to older relations,” he told BBC Radio 4’s Today programme.

Barclay said there had to be trust that people would behave in the safest way possible over Christmas, taking as many precautions as they can and making their own judgments, while doing the “minimum that is possible”.

On the emergence of a new strain in southern England, Barclay said: “I think it is concerning, particularly in respect of whether the spread of transmission is quicker with this strain.” However, he added: “It would be very surprising if the vaccine was impaired in terms of dealing with this strain of the virus.”

Shoppers had a “duty” to act responsibly when out Christmas shopping and stores needed to ensure that compliant behaviour was observed, he said. “I will be doing Christmas shopping. I will try and do as much as possible of that locally in the constituency and some of it I’ll do online.”

The virologist Dr Chris Smith said the decision to move London into tier 3 restrictions had been “pretty much on the cards” for the last few weeks. He told BBC Breakfast that despite being spread more quickly, the new variant of coronavirus may not be any “nastier”.

“Once it infects you, once it gets in you, it doesn’t actually make you any iller. That appears to be the pattern at the moment and the other crucial question at the moment is: ‘Is the change sufficient to side step what the vaccine does to protect us?’ For now, the answer seems to be no, but that’s something we need to watch.”

China slaps restrictions on travel to Hong Kong by some U.S. officials