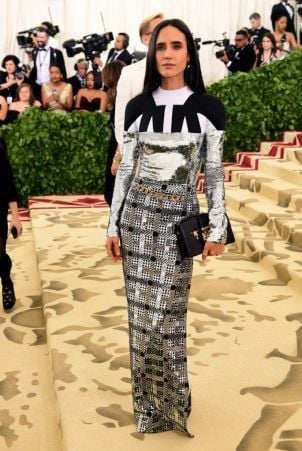 She got her big break in the 1986 David Bowie film Labyrinth, but it’s still hard to believe that Jennifer Connelly is turning 50 today (December 12).

We’re sure we’re not the only ones who are desperate to know the A-list star’s beauty secrets, as the mother-of-three barely looks a day over 30.

Both elegant and edgy, the actress has become just as famous for her impeccable red carpet style as she has for her leading roles over the years, in films including A Beautiful Mind, Blood Diamond and Requiem For A Dream.

And, because she’s a long-time devotee of Nicolas Ghesquière for Louis Vuitton, her most iconic outfits have a certain style formula that’s very unique to her.

Here, as Jennifer Connelly turns 50, we take a look back at some of her greatest fashion moments over the years…

If there’s one thing you should know about Jennifer Connelly’s style, it’s that she loves an LBD.

She turned heads in the early-Noughties when she rocked up to the red carpet wearing this taffeta off-the-shoulder number at the Baftas in London.

The early-Noughties was a questionable time in fashion for many A-listers, but even during this tricky style period, Connelly always seemed to hit the right note.

We could totally see some of Hollywood’s leading lights wearing this tiered dress by Balenciaga on the red carpet today. This was also 2002, at the Oscars.

She’s usually a fan of monochrome, but Connelly switched things up for the UK premiere of the film Wimbledon in 2004, which starred her husband Paul Bettany, by opting for a racy scarlet dress with flattering ruching at the hip.

Netted court shoes, footless tights and a belted coat dress aren’t an easy look to pull off, but Connelly looked glamorous as ever in this athleisure-inspired outfit at the European premiere of Blood Diamond in 2007.

Connelly raised her style game in 2014, when she stepped out at the Noah premiere in London wearing this Alexander McQueen gown. Her simple bun and natural make-up let the shimmering floral bodice and frayed organza black skirt do the talking.

A long-time Louis Vuitton fan, Connelly wore the designer head-to-toe at the Met Gala in 2017. We think this Sixties trompe l’oeil wool tartan minidress and patent ankle boots combo is one of her best looks ever.

Enlisting the help of creative director Nicolas Ghesquière yet again in 2018, Connelly looked sensational in this Louis Vuitton gown with a silver bodice and matching plaid-print skirt – nailing Met Gala looks two years in a row.

A sci-fi red carpet calls for an out-of-this-world look, and this crochet dress from (yep, you guessed it) Louis Vuitton really stole the show at the Alita: Battle Angel premiere in 2019. We love the dinky flying saucer purse too.

Nicolas Ghesquière and Jennifer Connelly clearly go together like bread and butter, because the actress chose to wear another of his Louis Vuitton dresses to the 2019 Met Gala.

The colour-block concept was an understated take on the event theme of ‘Camp: Notes on Fashion’, but the outfit held its own against some of the more extravagant looks of the evening.

Ten of the best modern day musicals to sing along to