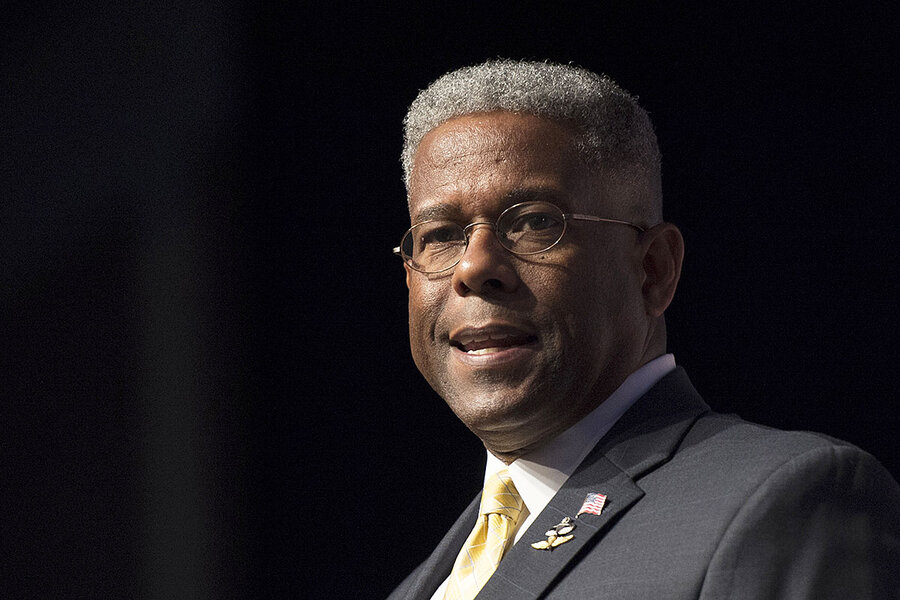 As dark fell over Taji, Iraq, on an August evening in 2003, Lt. Col. Allen West – angry and afraid – decided to take matters into his own hands.

His battalion had been ambushed several times, and now it had information of another imminent plot to attack them – and an alleged accomplice in custody.

“I came here for two reasons, to get the information I need or to kill you,” Colonel West, his 9 mm pistol drawn and resting on his knee, told the alleged accomplice, according to a U.S. Army investigation of the incident.

But with each denial of knowledge of the plan by the alleged accomplice, local police officer Yehiya Hamoodi, the rumored attack grew more imminent and deadly in Colonel West’s mind. He ordered everyone outside. Minutes later, he was pushing Mr. Hamoodi’s head into a clearing barrel – a sand-filled container used to clear ammunition from weapons. He put the pistol a foot from Mr. Hamoodi’s head and fired a round into the barrel.

“The man inside me probably did want to inflict hurt,” Colonel West told an investigator, “but the soldier and leader just wanted the pertinent intelligence for the safety of my soldiers.”

To this day, the incident – which dislodged faulty information – vexes ethicists and academics. It’s a case study in Army officer training for how to navigate moral gray areas in a war zone. But even when a situation is gray, Colonel West has a penchant for viewing it in black and white.

He wasn’t court-martialed, but the incident brought his Army career to an end – while launching his political career as a conservative cause célèbre for sticking to his principles despite the consequences.

Now, as the new chairman of the Texas Republican party, Colonel West’s unbending commitment to conservative principle has become a window on how Trumpism will survive the Trump presidency, say party regulars watching in astonishment as well as grassroots Republicans watching in righteous support.

A Tea Party forerunner of Trumpian disruption, he criticized the president in 2017 but now backs him to the hilt. Last week, within an hour of the U.S. Supreme Court dismissing a Texas lawsuit challenging President Donald Trump’s election defeat in four states, he blasted the ruling, suggesting that “law-abiding states should bond together and form a Union.” He has critiqued outright calls for secession – “America needs Texas to lead, not secede,” he also said last weekend – but as the Republican Party fractures nationally over Mr. Trump’s election defeat, he is staking a claim to be a vocal, earnest leader of the party’s grassroots Trumpian wing.

“Allen West is tailor-made for this moment,” says Fred Wellman, a retired U.S. Army lieutenant colonel who is now a senior adviser at the Lincoln Project, a group of Republicans opposing Mr. Trump.

“His political approach to this day [is] ‘take no prisoners,’” he adds. “He doesn’t work with anyone. He’s constantly making threats. … Trumpism rises, and here he is, state chair of a large state.”

With a precise high-and-tight military haircut and wire-rimmed spectacles, the conservative warrior presents seriously in measured tones and frequent historical references. But the content of his zero-sum view of politics – as a war between conservatism and “progressive socialism” – fires up restless grassroots Texans more than it does the trustees of the old Bush “compassionate” conservatism.

An African American born in a Blacks-only Atlanta hospital, he grew up in the same neighborhood that decades earlier produced Martin Luther King Jr. But he has called himself “liberals’ worst nightmare” and has rebranded the state GOP with a slogan, “We are the storm,” linked to the QAnon conspiracy theory (though the state party disputes that connection).

His shoot-from-the-hip critiques are aimed equally at “socialist” Democrats and “traitorous” Republicans who would consort with them. And while the majority of Texas Republicans may not share that Manichaean view of U.S. politics, it’s a pillar of the Trump base.

“West wants to say you’re either with us or against us,” says Brandon Rottinghaus, a University of Houston political scientist. “That sends a clear signal that Donald Trump’s influence on American politics continues.”

Like one of his heroes, Davy Crockett, Colonel West likes to say he’s another Tennessee Volunteer who followed the call to Texas. He graduated from the University of Tennessee before joining the Army, where a glittering 22-year career included tours in the first and second Gulf Wars and a Bronze Star, among other decorations.

Crockett and another of West’s heroes – the Spartan King Leonidas – both perished in heroic last stands, and it’s this angle that best illustrates how Colonel West views his job in Texas and nationally. The political marketplace of ideas is, in his view, more a battlefield of ideas – not a dialogue, or even an argument, but a conflict.

“Right now what we see are two conflicting philosophies of governance, two conflicting ideological agendas,” Colonel West told the Monitor in a September interview. “People are truly ready to get out there and make sure that [conservatives] hold on to Texas.”

A state party chair is supposed to help the party gain or stay in power, but Colonel West has put his personal stamp on the job. Where past chairs kept a low profile, recruiting candidates and keeping party finances healthy, he makes regular appearances at rallies and on cable news.

While he most often rails against Democrats, he’s fueled his rise in Texas by criticizing the state’s Republican leaders for what he calls the “tyranny” of Gov. Greg Abbott’s response to the COVID-19 pandemic: “My criticisms of Governor Abbott have nothing to do with the person. It has everything to do with the fact that we should not be ruled with orders, mandates, edicts, and decrees.”

But in terms of uproar generated, Colonel West’s attacks on the governor pale compared with his November criticism of Dade Phelan, a Republican state representative from East Texas, as “a Republican political traitor” for seeking “affirmation from progressive socialist Democrats.”

State representatives were quick to hit back at Colonel West with one of the most potent political attacks in Texas: not being a true Texan.

“Allen West [needs] to be bought a one-way bus ticket back to Florida,” said Dennis Bonnen, the outgoing Republican House speaker, in a radio interview. “The problem is that I don’t think Florida will take him.”

Colonel West’s approach also runs counter to how the GOP has been able to comfortably hold political power in the state for 25 years, some Texas Republicans say. Making a heroic stand against “progressive socialism” in Texas is all well and good, but the reality is that Republicans have been winning voters just fine already – in part because they have worked with Democrats without compromising their fundamental principles.

“Colonel West is certainly focused on the grassroots perspective of the party,” says Jamie McWright, president of the Associated Republicans of Texas, adding that they need to focus on issues that matter most to all Texans. “If we do, we’ll continue to win.”

While the state GOP as a whole has drifted to the right of the business-friendly, “compassionate” conservatism of the Bush family, it has declined to push the envelope in governing. Bombastic ultraconservatives have always been a feature of Texas politics, says Jim Henson, director of the Texas Politics Project at the University of Texas, Austin, but they haven’t been “overly successful.”

“I’m not saying he’s not important or relevant,” he says, but Colonel West “wants to claim a majoritarian status within the Republican Party, and to my mind it’s not clear that that’s true. … Allen West is a thorn in the side of many people. My suspicion is they’d rather pluck it than support him.”

Colleen Stolberg was there at the colonel’s political start on Florida’s Treasure Coast, and it embarrasses her still that she spelled the newcomer’s name wrong – Alan West – on publicity material.

As president of the Broward County Federation of Republican Women, her group was getting tired of cookie-cutter speeches from local candidates. She asked Colonel West to say something different, and he obliged: A talk about the women he served with in the military and the differences they’d faced in the countries he’d served in.

“He had everybody sold,” recalls Ms. Stolberg, who decided on the spot to volunteer for him. “He’s one of those people who will stand up for what he believes in and it doesn’t matter what the consequences are. … If he ran for president tomorrow, I’d probably work for him again.”

“Not your average politician.” It’s a compliment often heard about Colonel West – and another trait he seems to share with President Trump.

“I’m going up [to Washington, D.C.,] and I’m going to drain that cesspool,” he said at one April 2010 rally, foreshadowing the 45th president.  And in his one term in Congress, from 2010 to 2012, he was committed to his ideological mission.

“He was all business,” says Tom Rooney, a former Florida Republican congressman who served with him on the House Armed Services Committee. “On the House floor he’d talk to you about issues, but he wasn’t a back slapper.”

And, he adds, in trying to compromise with some lawmakers on the Hill “you don’t know how to get from Point A to Point B. … You may never get to Point B with Allen, because he’s set in his ways, but at least you know where he stands.”

Florida’s Treasure Coast was an ideologically diverse area at the time, and Colonel West may have lasted longer in the House save for his consistently favoring principle over compromise. Of 11 bills he sponsored, two passed, neither with Democratic cosponsors.

In Texas, frustrated grassroots Republicans hope his rigid conservative ideology will force state leaders to finally fight for their interests and concerns – like banning abortion, reinforcing traditional views of sexuality, and cracking down on unauthorized immigrants.

“Republicans in Texas are ready for their elected officials to actually deliver conservative results, he adds. “Chairman West recognizes that and has rightfully [become] an ambassador of the grassroots.”

Colonel West would certainly be an earnest ambassador. Had he been willing to compromise on some of his values, he might still be in the Army or Congress. As it stands, with a constituency comprised exclusively of Republicans, he hopes to maintain – and expand – that grassroots base as a new standard-bearer of the Republican Party’s Trumpian wing.

Editor’s note: This story has been updated to clarify a statement by Jamie McWright, president of the Associated Republicans of Texas, that the party should focus on issues that matter most to all Texans.

4 stabbed in skirmishes at DC protests, while 1 person shot at clashes in Washington state