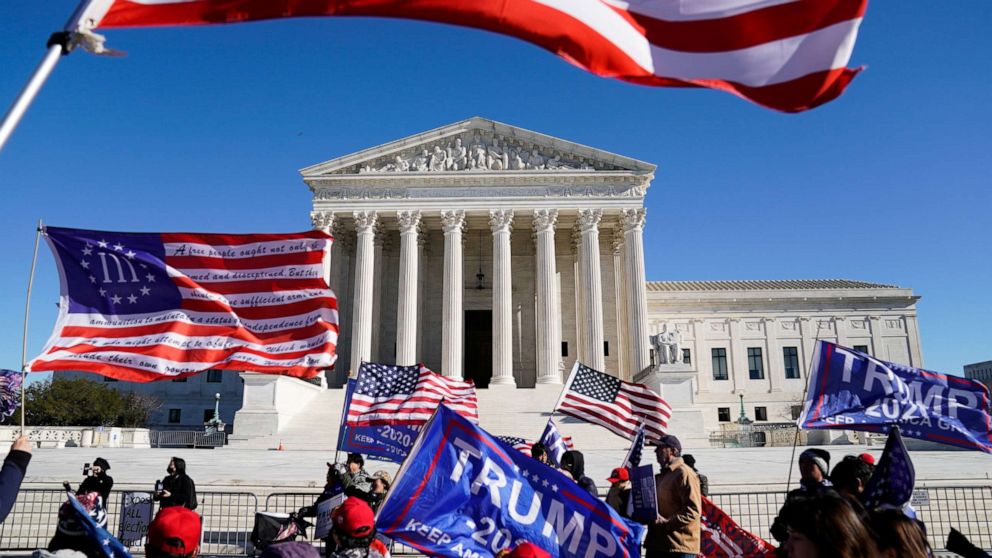 Four states sued by Texas in a bid to overturn the results of the 2020 presidential election asked the U.S. Supreme Court Thursday to swiftly reject the case and avoid legitimizing “a cacophony of bogus claims” that would upend the will of millions of American voters.

In court filings Thursday afternoon, the attorneys general of Pennsylvania, Wisconsin, Michigan and Georgia each offered scathing rebuttals to the Texas suit targeting their states.

“The Court should not abide this seditious abuse of the judicial process,” wrote Pennsylvania Attorney General Josh Shapiro in court documents.

“Texas seeks to invalidate elections in four states for yielding results with which it disagrees. Its request for this Court to exercise its original jurisdiction and then anoint Texas’s preferred candidate for President is legally indefensible and an afront to principles of constitutional democracy,” Shapiro wrote.

Michigan Attorney General Dana Nessel warned that if the justices didn’t quickly shut down the case, they could open the flood gates to waves of future post-election challenges.

“To do otherwise would make this Court the arbiter of all future national elections,” Nessel wrote in her state’s brief. “The base of Texas’s claims rests on an assertion that Michigan has violated its own election laws. Not true. That claim has been rejected in the federal and state courts in Michigan, and just yesterday the Michigan Supreme Court rejected a last-ditch effort to request an audit.”

Wisconsin invoked the longstanding right of each state to run its own elections free from outside interference.

“Texas’s choice to challenge Wisconsin law after the election also counsels against taking this case,” said Wisconsin Attorney General Joshua Kaul in his brief. “Texas cannot harm the interests of Wisconsin voters when it could easily have raised its concerns earlier. And the remedies it seeks would violate voters’ due process rights and separation of powers principles.”

“‘None are more conscious of the vital limits on judicial authority than are the members of this Court, and none stand more in admiration of the Constitution’s design to leave the selection of the President to the people, through their legislatures, and to the political sphere.’ That is as it should be,” Carr wrote.

Twenty-three states and territories voiced support for Pennsylvania, Wisconsin, Georgia and Michigan with a friend-of-the-court brief filed with the court.

District of Columbia Attorney General Karl Racine, writing on behalf of the group, suggested Texas’ case lacks “seriousness and dignity” asking the court to refuse to hear it. “The underlying legal claims Texas belatedly seeks to litigate in this Court can be, and indeed have been, litigated—and thus far lost—in alternate forums where facts can be developed and issues fully aired, subject to this Court’s ordinary certiorari review.”

Meantime,106 House Republicans urged the Supreme Court to take up Texas’ case and give it a close look on the merits.

“The unconstitutional irregularities involved in the 2020 presidential election cast doubt upon its outcome and the integrity of the American system of elections,” the president’s allies wrote in an amicus brief. “The broad scope and impact of the various irregularities in the defendant states necessitate careful and timely review by this Court.”

Notably, the House GOP brief never mentions the word “Trump” and does not explicitly call for tossing out certified election results. The signatories include two members of House leadership – GOP Whip Rep. Steve Scalise and GOP Policy Chair Rep. Gary Palmer – but did not include House GOP Leader Rep. Kevin McCarthy, a close ally of the president.

‘I do not feel safe’: Kansas GOP mayor resigns after threats over backing mask mandate