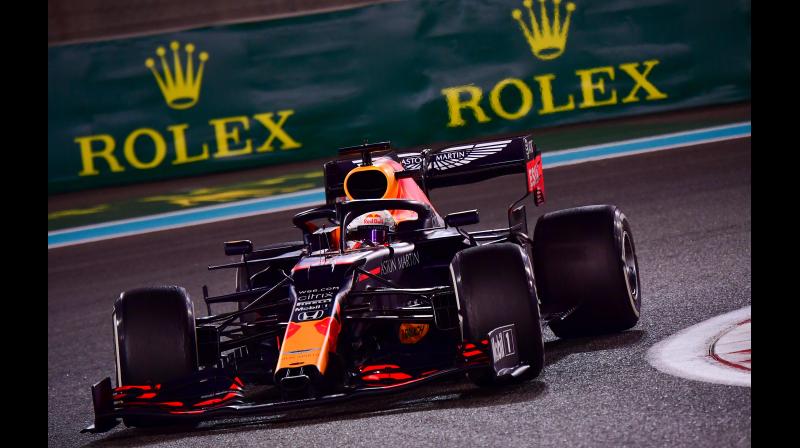 Yas Marina (United Arab Emirates): Max Verstappen claimed his second win of the season and the 10th of his career on Sunday when he drove to a clinical victory for Red Bull in a pedestrian season-ending Abu Dhabi Grand Prix.

The 23-year-old Dutchman dominated from start to finish as he turned his third pole position into a demonstration of speed, talent and flawless strategy to leave both Mercedes men well beaten behind him.

It was the first time he had claimed a lights-to-flag victory in Formula One.
“What a way to close a season – fantastic mate,” said his Red Bull engineer at the end on team radio. “After such a busy year, I think everyone was a bit tired at the end, but it is amazing,” he replied.

Verstappen eased home 15.976 seconds clear of Valtteri Bottas, who at least recovered some pride by taking second after his forlorn showing at the Sakhir Grand Prix, and 18.415 ahead of seven-time champion Lewis Hamilton.

“I am so happy,” said Verstappen. “I really enjoyed that and it is a great win and a great day for the team. I am going to enjoy the podium — and enjoy going home!”On his return to action after recovering from a bout of Covid-19, Hamilton struggled to make any impact as he battled through ahead of Alex Albon, who finished fourth in the second Red Bull, just 1.5 seconds adrift of the out-of-sorts champion.

“You can't win them all,” said Hamilton. “And, considering the last couple of weeks that I've had I am genuinely happy with the weekend, even I am have not been 100 per cent.

“But, congratulations to Max. It was a hard race for me and I am glad it's all over. It's a fantastic result anyway to get two podium finishes.”Mercedes team-mate Bottas said: “The Red Bull was too quick today. We could not get near them and could not keep up with them, but it was a solid race from my side.”

Lando Norris came home fifth ahead of his Ferrari-bound McLaren team-mate Carlos Sainz, a solid showing by the precocious pairing that secured third place in the constructors' championship on a day when they announced an American consortium is buying a major stake in the team.

Daniel Ricciardo, in his last race for Renault before replacing Sainz at McLaren, was seventh ahead of Alpha Tauri's Pierre Gasly, Esteban Ocon in the second Renault and Lance Stroll of Racing Point.

England cricket series in SAfrica canceled because of COVID

The tennis jet-set think local to reboot their sport