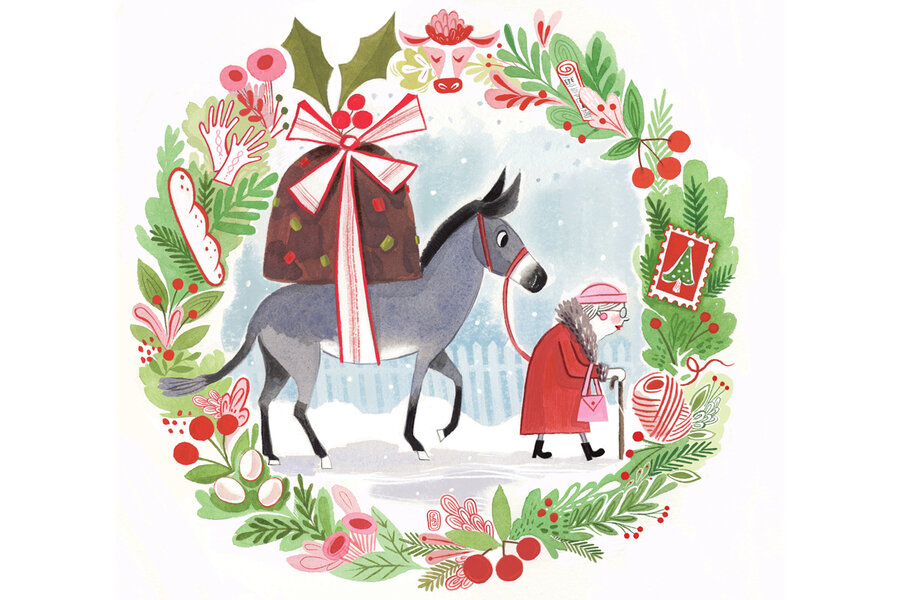 In your standard Christmas story, there is a family fruitcake that makes the rounds every year and doubles as a doorstop until it is mailed to the next victim. The tradition is easy enough to maintain, since it doesn’t involve any real work, other than annual retrieval and a trip to the post office. Certainly nobody is expected to eat it.

Our family bucked the tradition. We ate it. But then again, ours was not a fruitcake. It was an honest-to-goodness plum pudding, and it thudded onto our porch every December courtesy of Great-Aunt Gertrude. This was the real thing: an authentic antique confection produced with love, or at least a sense of obligation, by an authentically antique woman. Great-Aunt Gertrude was born in 1869, which is remarkable enough, but her holiday treat was positively medieval.

The plum puddings arrived faithfully, as did the white cotton gloves for my sister and me at Easter. I wasn’t much for white cotton gloves. It was just one of those little-old-lady things, and my great-aunt was very little and very old. That’s about all I could say about her. I was said to be an imaginative child, but visualizing this tiny woman as a vibrant and interesting person was beyond my powers.

But I’ll give her this: Her plum pudding could out-punch anybody’s fruitcake. Mom would make a hard sauce to go with it, and we happily gobbled it all up. Once a year did the trick, though. It was rich.

It was ridiculously rich, black-hole dense, and plenty mysterious. So recently I looked up the recipe. Gertrude’s plum pudding must have been a production. There were no plums in it.

Dried fruit and spices might have prevailed but for the cognac, eggs, and more than a pound of suet. Without a doubt the suet would have been procured from an unwilling local bovine, perhaps one Gertrude knew personally, delivered by knacker-wagon. Plus fresh bread crumbs derived, of course, from freshly baked bread. The reason the bread needed to be fresh is lost to history, because the entire operation had to be started literally one year in advance and the product stored somewhere away from open flames until it settled down.

Then it was placed in a box and cushioned with crumpled pages from the Daily Hampshire Gazette, tied with twine, addressed, strapped to a mule, and hauled to the post office. This was truly an act of love.

“That it was,” my father said, in a tone that suggested there might be more to the story.

Well. It’s possible she signed the card till then. But, my father said, it was Great-Aunt Caroline who made the pudding, warehoused it until it behaved, groomed the mule that lugged it to the post office, and maybe consoled the herd of the suet donor. Caroline was ever and always the younger sister. Gertrude had four years on her, and they lived together for decades, spinsters both, sharing stationery with “The Misses Brewster” printed in a florid script.

Spinsters. The term used to carry that stain of unsuitability, even failure. It’s not even a concept anymore, and barely a word. But by now I was old enough to be curious.

“Didn’t either of them ever want to marry?”

Caroline did fall in love, my father said, but the family did not approve. Of four sisters, one married, producing one son and no résumé. And the others? Gertrude graduated from Smith College, studied at Oxford, taught, was the first female trustee of the Forbes Library in Northampton, Massachusetts, and dean of the high school there. Mary Kate wrote books and plays and had traveled around the world twice before she was 26. Caroline, also a Smith grad, went to New Mexico, where she studied the cliff dwellers. She taught math in three other states and worked as a computer for Columbia University’s astronomy department.

Evidently, it takes a lot of living to become a proper little old lady. After Great-Aunt Gertrude died, Caroline plugged on, bright and agile, to the age of 104. I don’t know if we got a plum pudding after Gertrude was gone. I was on my own by then.

But I haven’t forgotten it.

Sometimes even stories can be richer when you know the ingredients.

Whose ‘Nutcracker’? Rethinking a Christmas staple.