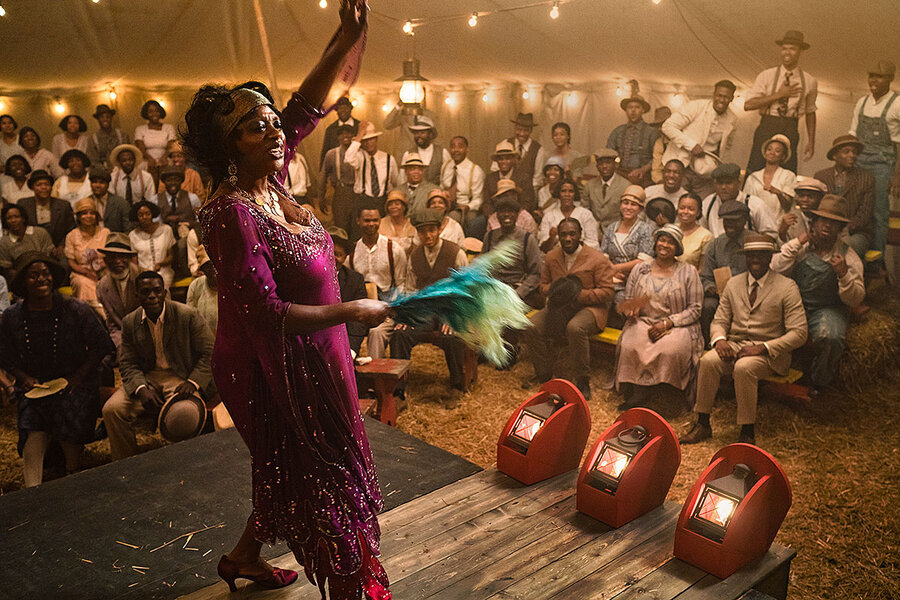 Filmed plays are often unjustly denigrated for being “uncinematic.” “Ma Rainey’s Black Bottom,” the movie adaptation of the 1984 August Wilson play, is a triumphant example of just how good a filmed play can be if both the play and the acting are first rate. A film director doesn’t have to shoot the works to hold an audience. If the drama is galvanizing enough, that’s all you need. And what we have here is more than enough: Viola Davis in one of her greatest performances, and the late Chadwick Boseman in his final and most powerful appearance.

Wilson’s play was his first to make it to Broadway and is an early entry in what became known as his “Pittsburgh Cycle” of 10 plays (and the only one not set in Pittsburgh) about Black Americans in the 20th century. As directed by George C. Wolfe and adapted by screenwriter Ruben Santiago-Hudson, it takes place in a Chicago recording studio over the course of a day, and, except for a few exterior shots of the streets outside, that’s where the action remains.

The time is 1927, and the centerpiece of the drama is the legendary “Mother of the Blues” Gertrude “Ma” Rainey, with her gold-capped teeth, whom we first see in flashback wailing away in a tent show in the Deep South, and then later, in the prime of her career, spotlighted in a flashy club.

Her band musicians, waiting on her in that Chicago studio to cut a record, take up much of the early action. Rainey is late to the session, but the musicians, with their easygoing bonhomie, are unfazed. In its own freeform way, their cagey, chuckling rapport resembles a bluesy jam session without the music. The music is in the badinage.

The men constitute a motley crew. The aged, aptly named Slow Drag (Michael Potts) is the bass player; the world weary, philosophic Toledo (Glynn Turman) is the piano player; Cutler (Colman Domingo) is the trombonist and unofficial leader of the troupe. All of these roles are beautifully acted.

And then there’s Levee (Boseman), the cocky, furiously ambitious trumpet player, who makes his entrance with a pair of gold-colored shoes. Levee is all about style, about showing off, and he doesn’t put much store in the life lessons of his older mates. He sees them as the past, while he represents the future. And the future for Levee is a music that moves away from the slow rhythms and blues roots of Ma Rainey and her generation. That’s not music you can dance to. He wants to be his own boss, lead his own band, make his own music, record his own records. This, of course, puts him in direct conflict with Rainey, when she shows up for the session. She will only do things her way, and Levee, who even makes a play for Rainey’s chorus girl flame (Taylour Paige), represents something that must be eradicated.

The greatness of Boseman’s performance is that he simultaneously shows us Levee’s youthful brashness and the pain and rage smoldering beneath it. As young as he is, Levee has a full history of racist family horrors to unfold, and when he finally does so, the screen all but trembles in the telling. Wilson is a champion at fashioning monologues that have the force of operatic arias, and Boseman takes flight with them.

Davis fully matches Boseman’s intensity. She helps us see how the singer’s almost frightening willfulness serves a higher ambition. Ma Rainey wants to control not only her music but her life – which are much the same thing.

She knows that the white music establishment only tolerates her because of the money she brings in. “They don’t care nothing about me,” she says at one point. “All they care about is my voice.” A shrewd businesswoman, she wants what’s coming to her. She’s smart enough, and cynical enough, to know that her fame won’t last forever. But thanks to Wilson and Davis, Rainey’s spirit and sorrows will continue to resonate.