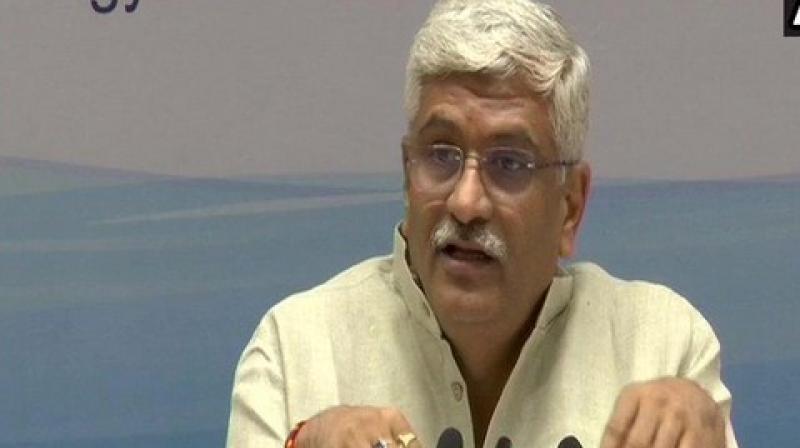 HYDERABAD: Union Jal Shakti minister Gajendra Singh Shekhawat has asked Chief Minister K. Chandrashekar Rao not to proceed with the construction of seven irrigation projects that are being objected by Andhra Pradesh unless and until the mandatory appraisal is done by Godavari River Management Board (GRMB), Central Water Commission (CWC) and the Apex Council.

The Union minister was replying to Rao’s October 2 letter outlining various issues of Telangana state pertaining to share and utilisation of waters in Krishna and Godavari rivers. He reminded that during the Second Apex Council meeting of the Jal Shakti Ministry, Chief Ministers of TS and AP agreed to submit DPRs of their respective irrigation projects for approval of the concerned wings of the ministry.

Shekhawat pointed out that as per the AP Reorganisation Act 2014, both states were bound to submit DPRs of new projects to the KRMB for appraisal and technical clearance and sanction by the Apex Council.

He said, “The opinion of the ministry is that any irrigation and/or multipurpose project, whether mentioned or not in Krishna Water Disputes Tribunal-I and/or APRA-2014 unless tech no-economically appraised by the CWC and accepted by the Advisory Committee of the DoWR, RD&GR, ministry of Jal Shakti, should be considered as new project for the purpose of appraisal, irrespective of the fact whether it was conceived before or after bifurcation of erstwhile Andhra Pradesh.”

He said those projects which have been techno-economically appraised by the CWC and accepted by the Advisory Committee of the DoWR, RD&GR, ministry of Jal Shakti, will also be considered as new projects for the purpose of appraisal in case there is change in scope.

He said that his ministry’s stand is clear on this aspect that neither TS nor AP can go ahead with projects, including Rayalaseema Lift Irrigation Scheme and Pothireddypadu Head Regulator expansion scheme by AP and Third TMC component of Kaleshwaram LIS, Sitarama LIS. GUS Phase-Ill, Tupakulagudem project, TS drinking water supply project, barrages on Lower Penganga River and Ramappa Lake to Pakhal Lake diversion.

Referring to Rao’s complaint over non-installation of telemetry systems by the KRMB, the Union minister made it clear that during the first meeting of the Apex Council both state governments had agreed that both states would have to equally meet the costs of setting them up. He pointed out that even after repeated reminders and requests from the KRMB, neither state responded and have not paid their full share of expenditure due to which the installation of telemetry was not completely done.

He said, “If the states clear their pending payments, the KRMB would immediately get them installed and can do the required monitoring.”

Referring to the demand of the TS government to constitute a tribunal to decide water shares of TS and AP in Godavari waters, Shekhawat pointed out, “You (Rao) agreed in the meeting to send a request immediately to the Union government for constituting a tribunal in this regard. As decided in the meeting, our ministry will take a positive decision in this regard after receiving the request from you.”