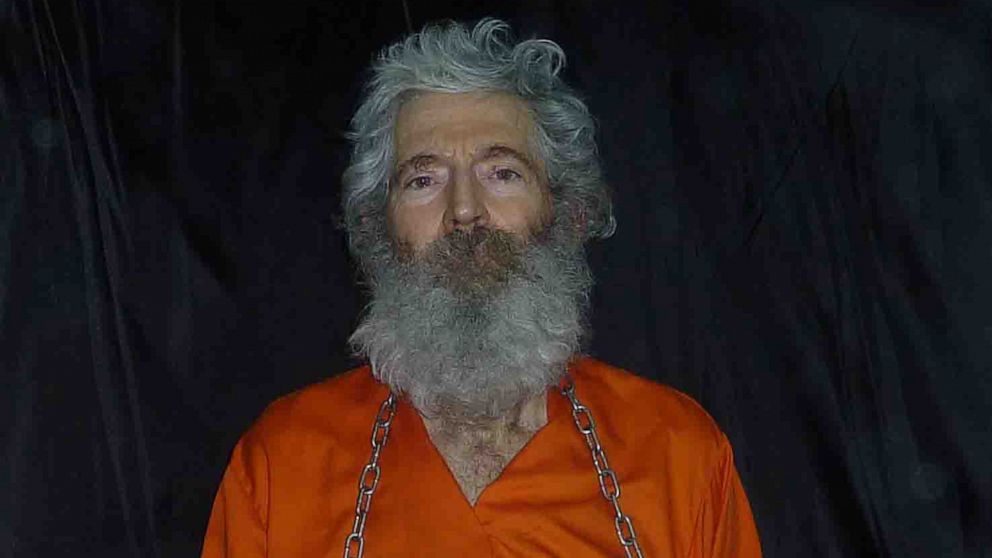 The United States on Monday officially fingered Iran for the first time for the kidnapping, captivity and what it called the “probable death” of retired FBI Special Agent Bob Levinson 13 years ago, naming and shaming a pair of accused top Iranian intelligence officers.

Senior U.S. government officials said the two Iranians — whose whereabouts are not known — were responsible for Levinson’s sad end.

But they did not disclose whether U.S. intelligence or the FBI have ascertained the reasons for his mysterious March 9, 2007 disappearance on remote Kish Island, where he was working on a murky CIA contract for intelligence analysts at the agency.

Levinson’s family has suffered years of frustration at the absence of information and what they have felt were betrayals by the U.S. government — and particularly the Obama White House — ever since the father and grandfather, who spent 28 years chasing drug traffickers at the DEA and then mobsters for the FBI, disappeared.

ABC News has reported in 2019 that Levinson’s case had been set aside by the Obama administration during negotiations for the Iran nuclear deal, senior officials of both the Obama and Trump administrations confirmed.

That deal has now been jettisoned by President Donald Trump.

On Monday they welcomed the U.S. Treasury Department designations of Iran and its agents responsible for his fate.

“Robert Levinson will never come home to his family alive because of the cruel, cynical and inhumane actions of the Iranian authorities. Because of these men and others like them, our wonderful husband, father and grandfather died alone, thousands of miles from everyone he loved. This is just one step in a long road toward achieving justice for him, but it is an important one,” the family said in a statement Monday.

The two officers the U.S. said were with Iran’s Ministry of Intelligence and Security (MOIS), Mohammad Baseri and Ahmad Khazai, “acted in their capacity as MOIS officers” during their involvement with the abduction, captivity and “probable death” of Levinson, officials said.

U.S. Secretary of State Mike Pompeo said in a statement that, “Senior Iranian officials authorized Levinson’s abduction and detention and launched a disinformation campaign to deflect blame from the regime.”

Other officials briefing reporters Monday on condition of anonymity declined to say how they concluded these two alleged Iranian intelligence spies were involved, why Levinson was kidnapped and held for years, or what prompted the official designation now.

The intelligence community suspects that Iran’s internal security services wanted a crack at a man who had spent his career in law enforcement, “but that’s a deduction,” one of the officials said.

“It’s very clear that this case was well understood, well known at very high levels in the Iranian government,” the official said.

Iran’s regime has repeatedly denied holding Bob Levinson, with the exception of a message sent to a United Nations office last year stating that there was an open judicial case on Levinson. The regime later retracted that statement, however.

Last March, the Levinson family said they had grudgingly accepted a U.S. government assessment that he had died in Iran in captivity.

Three Americans are believed currently held in Iran, Baquer Namazi, Siamak Namazi and Morad Tahbaz, and it was unclear how the administration’s confrontational approach to Tehran in the waning days of President Trump’s term will affect their cases.

“We call on the Iranian regime to provide a full accounting of Mr. Levinson’s fate, and we will not rest until all Americans wrongfully detained by Iran are back home. We hope today brings the Levinson family some of the answers and justice they deserve,” Pompeo said in his statement.

ABC News reported last year that at the time, both Iranian and Obama’s nuclear deal negotiators agreed to the release of several American detainees but set aside Levinson’s case to close the ill-fated deal to shut down the regime’s nuclear program. U.S. officials said they believed the retired G-man was already dead but other officials said the FBI and CIA disagreed over with the assessment based purely on circumstantial information at the time.

But one of Levinson’s close friends said the same could happen to another American hostage, civil contractor Mark Frerichs, kidnapped last January in Afghanistan and whose case remains in limbo as the U.S. and Taliban negotiate an end to America’s “longest war.”

It is unknown why commercial contractor Frerichs, 57, of Lombard, Illinois, was kidnapped but officials believe he is held by the Haqqani Network, a faction of the Afghan Taliban.

“My friend, Bob Levinson, was left behind by an administration seeking a nuclear deal with Iran. Now a different Administration is getting set to leave another American, Mark Frerichs, behind in order to conclude a speedy exit from Afghanistan,” said Eric Lebson, a former national security official who advocates for American hostages including Frerichs’ family.

Officials have been working to free Frerichs and, so far unsuccessfully, to uncouple his case from the peace process in the 19-year war with the Taliban, multiple sources inside and outside the government have told ABC News.

Leaked Iranian military documents from 2007, obtained by ABC News last year and assessed to be legitimate, appear to show that Bob Levinson was under suspicion as soon as he arrived on Kish and was soon picked up by Ministry of Intelligence agents and held at a military airfield by Iranian military prosecutors. Both men identified by U.S. officials today were from the same ministry and are experienced in counter-espionage operations, officials said.

One of the documents, dated March 8, 2007, states that Levinson — erroneously referred to as “Robert Anderson” — had an FBI background, “may be CIA,” and alleged he was engaging in “spying activities.”

“He is here using the cover of a tourist while conducting various meetings, taking pictures and gathering information,” an Iranian counterintelligence official appears to have informed military prosecutor Hojatol-Islam Bahrami, who then ordered Levinson’s immediate arrest by “MOIS [Ministry of Intelligence] brothers” in a handwritten reply on the typed memo.

“It shows the Iranian government knew where Bob Levinson was and this specific Iranian official gave orders to arrest him,” Ladan Archin, a Tehran-born and raised policy expert who served as the Iran Country Director at the Pentagon during the Bush administration, told ABC News last year when she examined the files.

The U.S. recently upped the rewards for information leading to the recovery of Bob Levinson to $25 million, a sum comparable to offerings for the leadership of ISIS and al Qaeda.

“No matter how long it takes, we will find the individuals who are responsible for what happened to Bob Levinson, and we will hold them accountable,” Levinson’s family said in the statement on Monday.

The government officials on Monday said the timing of the sanctions reflect relevant information becoming available and working its way through a legal process leading to the new sanctions against Baseri and Khazai, though neither are known to have western bank accounts that could be targeted.

Another official called the sanctions “one part of a pressure campaign” and said there could be penalties on others who have met with them. “These individuals have met directly with intelligence officials from other countries,” the official said.

“We hope that this gives Bob’s family some of the answers they deserve,” one official said, but added: “We are still working hard to bring him home and bring justice and closure to his family.”