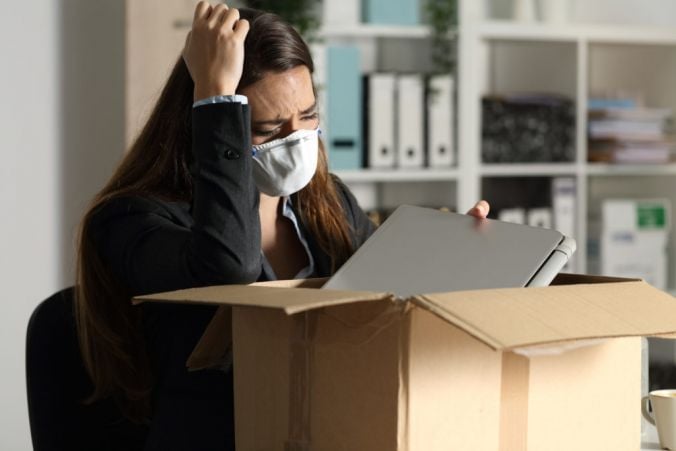 New figures released by the Office for National Statistics (ONS) reveal that more people were made redundant in the UK between August and October than at any point on record.

There were 370,000 redundancies during the quarter, as the coronavirus pandemic continues to have a devastating effect on businesses.

Our latest labour market statistics have been published https://t.co/84JliixZSB pic.twitter.com/3OvoEEL3mp

If you know someone who’s recently lost their job due to restructuring, it’s important to be supportive during what may be a very difficult time for them.

The thought of not having to get up and go to work in the morning may be appealing to you when you’ve had a bad day, but that’s not the same as losing your job altogether. It’s not just the salary you lose when you’re made redundant, it can feel like a personal failure and cause significant loss of self-esteem.

2. At least you’ll get a nice big payout

There’s no guarantee that redundancy goes hand in hand with decent severance pay. It very much depends on the employee’s contract and how long they’ve been at the company, so don’t presume they’ve got a financial cushion to soften the blow.

It doesn’t matter if a person loved or hated their job, redundancy can come as a huge shock and cause huge amounts of stress and worry, and that’s not something to be joked about.

4. You won’t have to deal with your bad boss/colleagues anymore

Just because someone complained about their nightmare micromanaging boss, or that one irritating colleague they couldn’t stand, doesn’t mean redundancy is a blessing. You may think you’re ‘looking on the bright side’ but if you’re not careful, it can seem like you’re making light of their misfortune.

5. Now you can relax

Not everyone can afford to sit back and enjoy ‘funemployment’ for a while. There’s nothing relaxing about worrying how you’re going to pay the bills if you don’t get another job soon.

6. At least you’ll have Christmas off

Being made redundant in the run up to Christmas may seem like a win to some people, because you’ll have time to enjoy the festivities, but for those living paycheck to paycheck, it won’t be a merry Christmas at all.

7. You can get your Christmas shopping done now

Likewise, having time to do Christmas shopping doesn’t help when you’re not sure how you’re going to pay for it.

8. I’d love to be made redundant

Even people who’ve occasionally daydreamed about being made redundant so they can take some time off or pursue a different career goal, may find the reality of losing their job is quite different. Going on about how much you’d love to quit your job or be made redundant is insensitive.

9. At least you won’t have to commute any more

Of course there are downsides to every job, a long commute being one of them, but many people would happily put up with a difficult journey rather than face being out of work.

10. Now you can spend more time at home

Long hours in your workplace – whether it’s an office, a factory, a shop or anywhere else – can be tough, but that doesn’t mean everyone would prefer to be sat at home. Besides, haven’t we all spent enough time at home lately due to the pandemic?

11. You can spend more time with your family

Taking time off is not the same as being made redundant. Rather than spending more quality time with family, days may be spent scouring job sites and sending endless applications in the hope of finding another job as soon as possible.

12. Can you help me with something?

Don’t assume someone who’s been made redundant has empty days they want or need to fill. It’s one thing to reach out and see how they’re doing, but don’t bombard them with requests to help you out with mundane tasks just because they’re not at work.

As much as we love to complain about work, a job can also be a source of meaning and joy in our lives, as well as financial security, and when that’s taken away, it can be devastating. People who have been made redundant may need time to come to terms with the loss, and the support of family and friends is so important.

9 reasons you will miss your Christmas party this year