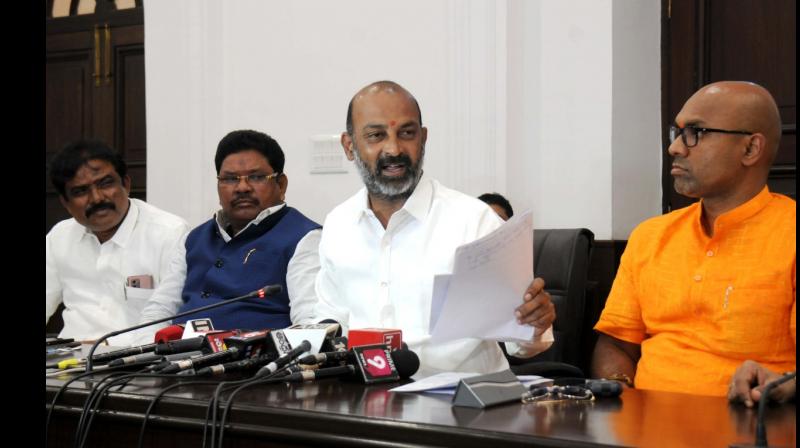 Hyderabad: Telangana Chief Minister Kalvakuntla Chandrashekar Rao will soon go to jail for his corruption and loot of public money, especially the thousands of crores of rupees he took as bribes from contractors in irrigation projects, said BJP state president Bandi Sanjay Kumar on Monday, while addressing the media in the national capital.

Bandi Sanjay made these politically sensational remarks against Chief Minister Chandrasekhar Rao brimming with confidence, saying, “KCR will go to jail in some days soon for his corruption in irrigation projects in which he looted thousands of crores commission, under redesigned projects.”

Member of Parliament Sanjay said, “we will not leave him. He will be sent to jail soon even if he offers namaskars with cinematic style. We will not leave him easily. We are going to show evidence of how he colluded with contractors and committed corruption and looted public money for himself and his family members. We will soon file cases against him with complete evidence.”

The BJP state president alleged that CM Rao had taken thousands of crores of rupees from Kaleshwaram project. He accused Rao of constructing meaningless projects which do not benefit the state, its farmers or people in general, but only to enrich three or four key contractors, who in turn ensure gratification as major commission in exchange for rigged tenders.

Mr Sanjay asked, “what was the purpose or benefit of going for a third TMC from Kaleshwaram project. There is absolutely no additional benefit for farmers or the state, only for some contractors and the CM and his family.”

He also alleged that Rao started a new drama to pretend to take Central approval for his misbegotten to loot another Rs 20,000 crore under the 3rd TMC, but is now “caught in his own web”.

“If you see the contradictory claims and assertions of the Chief Minister and the chief of engineers from the irrigation department, it is clear that the TRS government has accepted its scam,” he said.

Sanjay demanded Chandrasekhar Rao should reveal all details of his Delhi tour to the people of Telangana, saying, “CM KCR is trying to create confusion in the minds of people with his Delhi tour. He wanted to divert people’s attention to his corruption and his failures. But we won’t let him succeed.”

Sanjay also questioned why CM Rao did not join the farmers’ agitation in Delhi to express his support. “It is a typical KCR drama, which he enacted in the state under the guise of being interested in farmers’ welfare.”

He pointed out that Jal Shakti union minister Gajendra Singh Shekhawat had clearly replied that there can be permission for projects without DPRs. “Why is CM Rao not able to even submit proper details and DPRs as per rules? Similarly, why can’t he write a letter to establish a new tribunal for Krishna river disputes between Andhra Pradesh and Telangana? The Central government will okay it one day? Why is KCR not doing it?”

Sanjay said that instead of giving promotions and hikes to public sector employees, Rao was playing politics with their unions and leaders, even as he handed out PRC and IR. “KCR promised that there would be no contract employees once Telangana was formed, but in the last seven years, he neglected the contract employees.”

Centrists have a solution for Trumpism: Trump Lite