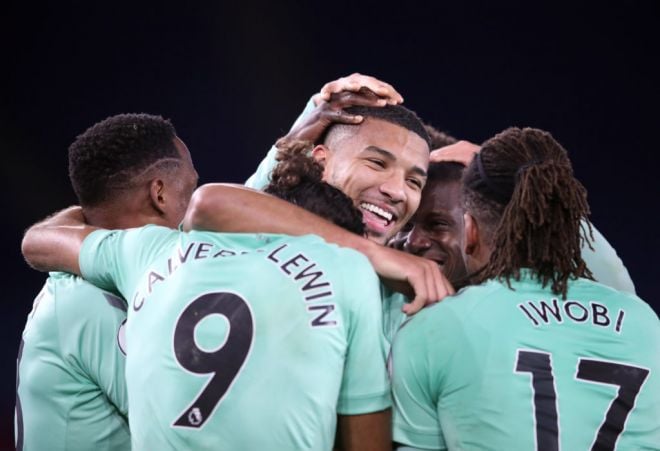 Everton sent a warning to their top-four rivals after an impressive 2-0 win at Leicester.

It was the Foxes’ fourth defeat in seven league games at the King Power Stadium as their home woes threaten to undermine their own legitimate top-four chances.

They dominated possession but could not break down a stubborn Toffees side who rose to fifth, a point and a place behind Leicester.

The Foxes had a late penalty overturned after referee Lee Mason initially awarded a spot-kick to sum up another disappointing home outing.

Youri Tielemans’ low strike from the edge of the box inside two minutes was as good as it got for the hosts, who rarely looked like breaching Everton’s organised defence.

The Toffees always looked the more composed and they took the lead after 21 minutes.

Richarlison collected Alex Iwobi’s pass on the left and James Justin allowed him to drift inside too easily.

The forward’s 20-yard shot then caught out the unsighted Kasper Schmeichel who could only help it into the bottom corner.

Olsen, in for Jordan Pickford, had little to do – aside from collecting a low Cengiz Under effort – as the Toffees grew into the game, aided by Leicester’s sloppiness.

Christian Fuchs, Wilfred Ndidi and Nampalys Mendy were all guilty of wasting possession and the Foxes escaped when Dominic Calvert-Lewin’s header was gathered by Schmeichel.

The Toffees remained controlled, despite losing Allan to a hamstring injury five minutes before the break, while Leicester’s task was to forge a dramatic improvement in the second half, or see their patchy home form continue.

But – despite James Maddison and Justin’s bustling efforts – no early leveller came.

Olsen remained largely untroubled as the Foxes tried to respond but they failed to click, thanks largely to robust Everton and the excellent Ben Godfrey.

The visitors’ attacking ambitions were limited though with 14-goal Calvert-Lewin offering nothing more than an outlet as the Toffees sat back and managed the game.

Tielemans dragged wide and Maddison curled over after 65 minutes as Leicester continued to probe but there was still little tempo to the hosts – or a suggestion they would find a leveller.

Everton were content to bide their time and a second came with 18 minutes left.

They had barely been in Leicester’s box but won a cheap corner and Schmeichel brilliantly denied Michael Keane’s glancing header from Gylfi Sigurdsson’s delivery.

The ball fell for Calvert-Lewin but Schmeichel’s superb stop turned his strike onto the bar only for Holgate to gobble up the rebound from close range.

Sigurdsson shot over before Leicester thought they had grabbed a lifeline with seven minutes left.

Ayoze Perez went down under Andre Gomes’ tackle and referee Mason initially awarded a penalty, only to reverse his decision after checking the monitor.

Perez also had a goal ruled out for offside as Everton closed the gap at the top.

Fulham move out of bottom three