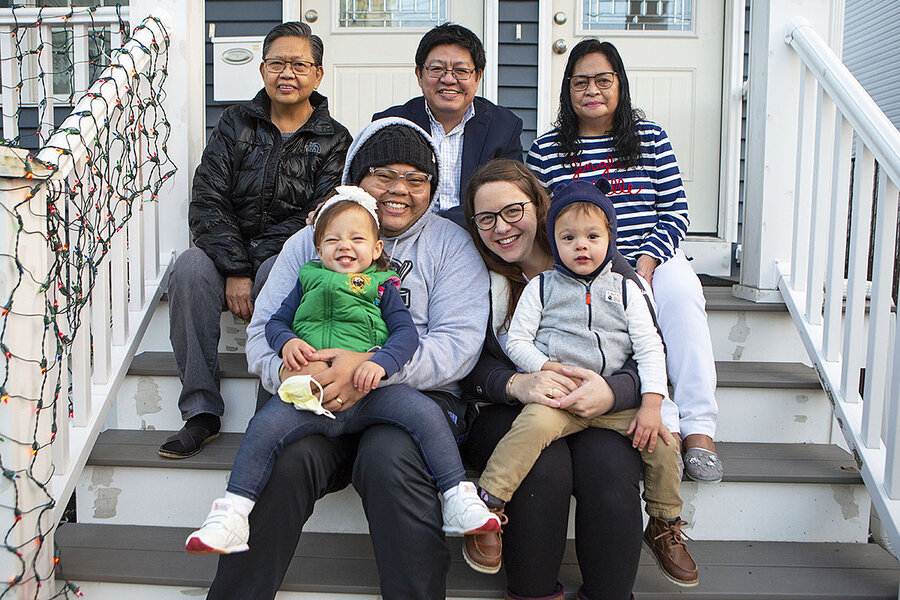 A peak in an ongoing trend

Across the United States, families are living together in record numbers as they respond to public health and economic calamities. The number of 18- to 29-year-olds living with their parents this year rose from 47% in February to 52% in July, according to the Pew Research Center, surpassing the previous peak set during the Great Depression. Families living together in multigenerational households also accelerated after the Great Recession of 2008.

“We see families turning to each other in difficult times,” says Jaia Peterson Lent, deputy executive director of Generations United, a nonprofit based in Washington, D.C., that promotes connections among people of different ages. “During COVID we’re seeing families come together for a variety of reasons – it may be caregiving, it may be a way for social connections during a time of lots of isolation.”

Yet American families aren’t only moving in together during troubled times. The percentage of the U.S. population living in multigenerational families has grown steadily since the 1980s and hit a record 20% of the population – 64 million people – in 2016, according to a 2018 Pew Research Center report. (Pew defines multigenerational households as those with two or more adult generations or with grandparents and grandchildren under age 25.)

Experts believe the long-term increase in multigenerational households is due to a combination of demographic changes, falling wages, and rising student debt. In addition, cultural changes are shifting the way Americans perceive the role of family, with many questioning whether living as private, independent, nuclear families is still attainable – or an ideal worth striving for.

“We reflect often back on 2009, and what we saw then was many families were coming together out of necessity. They stayed together by choice because of the desire to maintain those connections,” says Ms. Peterson Lent of Generations United.

Most of the multigenerational families interviewed for this article – across races, ethnicities, income brackets, and geographic locales – said the benefits of living together outweigh the drawbacks, and they have no plans to change in the near future. A few are waiting until family members are on better financial footing before moving out or feel they need to branch out on their own soon for more independence.

Lindsay Brooks, a 26-year-old from Forestville, California, who finished paying off student loans from college and graduate school this fall, says she paid the loans “10 times faster” because she’s lived at home rent-free with her mom for the past three years. With a recent job promotion and a boyfriend, however, Ms. Brooks is thinking about leaving her childhood home.

“It definitely has been worth it,” she says. “But I think it’s important for people to set a timeline, and not get caught down that rabbit hole of not having to pay for anything, and focus on moving on and moving out.”

Adult children living at home for practical and financial reasons is nothing new. Earlier in American history, family life centered around a farm or family enterprise, says Steven Ruggles, a professor of history and population studies at the University of Minnesota. Multigenerational families were common because at least one child would remain living in their parents’ home to inherit the family farm or business.

The recent rebound in multigenerational living “has mostly to do with changing characteristics of younger generations,” says Dr. Ruggles, such as declining marriage rates, a rising number of unemployed or underemployed young adults, and increasing racial and ethnic diversity.

“I think it’s been pretty consistent over the last 150 years that most intergenerational co-residence of older people with their adult children has been intended to aid the children, not the old people,” says Dr. Ruggles.

Wilma Walker lives in Florissant, Missouri, in a four-generation household with her husband, her 97-year old mother, her adult daughter, and two grandchildren. She says that within the Black community in the U.S., she’s “always known it to be like a support in our culture. When our parents get older, one of the children in the family automatically makes plans for that.”

Ms. Walker’s adult daughter moved back home five years ago after her marriage dissolved, and the family has stayed together, both for financial reasons and because they enjoy living together.

“You have all of these generations who are able to pour [wisdom and love] into each other,” says Ms. Walker, who is a minister. The hardest part is blending the needs of the oldest and youngest members of the house, with Ms. Walker having to remind her grandkids not to run too loudly over her mother’s bedroom.

Balancing needs – and risks – across generations has taken on new meaning during the pandemic. A 2017 study by researchers at Columbia University Mailman School of Public Health found some health benefits to multigenerational living but also cautioned that overcrowded houses can be a risk factor for spreading diseases among family members.

Victor Gonzalez from Lawrence, Massachusetts, worries about bringing the new coronavirus home because he works outside the house at a labeling company. But he doesn’t want to move out of the apartment where he lives with his parents, grandmother, and younger brother, because he knows his parents need the financial support he provides.

“It was really hard [to move back home] because the last thing I wanted to do was be out and come back, but then I saw that they need the help,” says Mr. Gonzalez, who moved home last year after separating from his former partner. He pays half of the rent and helps with groceries and bills. His mom watches his young son during the day, and his dad is trying to start a new business after selling his taxicab company.

“I don’t have as much privacy, living with my parents,” Mr. Gonzalez says. “But it’s all a matter of time until I see they’re settled. I want them to not have to worry about … being short on rent.”

Last spring, a highly read article in The Atlantic called “The Nuclear Family Was a Mistake,” by David Brooks, argued that shifts over the 20th century from bigger, extended families to smaller, nuclear families led to a family structure that “liberates the rich and ravages the working-class and the poor.”

“Among the highly educated, family patterns are almost as stable as they were in the 1950s; among the less fortunate, family life is often utter chaos. There’s a reason for that divide: Affluent people have the resources to effectively buy extended family, in order to shore themselves up,” Mr. Brooks wrote. He suggests reprioritizing multigenerational families or creating “forged families” – a term coined by Daniel Burns at the University of Dallas – by developing friends who act like family.

Congress could also provide more funding for the Older Americans Act, which was reauthorized this year and provides for a National Family Caregiver Support Program for those caring for qualifying family members, as well as grants for multigenerational programs such as joint adult and child day care centers.

Strategies for thriving across generations

For those living in multigenerational families, it takes effort to smooth frictions over household chores or differences in personality traits. But the effort is worth it says Ms. Walker from the four-generation Missouri household. She advises people to be patient and think about how they care for their family members.

“When you’re living in a house, it’s an opportunity to be selfish – it’s your kitchen, your pot, your TV,” she says. “But it feels horrible to feel not wanted, and maybe that person needs you right then because they don’t have a place to go. That’s the way I like to live in my house – I like to serve. I get a rewarding feeling from that.”

Setting clear expectations regarding shared and individual time, finances, and chores helps too, says Ms. Peterson Lent of Generations United. “We recommend having time for a family meeting to talk about boundaries and ground rules and get buy-in from family members.”

For Ms. Guevara, a white American who married into a Filipino American family, the shift in cultural attitudes toward family has been beneficial. She grew up in a small family without many kin nearby. When she traveled with her husband to the Philippines, she realized that his family had recreated their original living situation in the U.S., with family close together in the same Massachusetts neighborhood.

“There’s this communal way of living there where nobody’s too far away. It’s very typical for families of multigenerations to be in one household,” she says. “I just think there’s something really amazing about that and something that’s really lost on a lot of people here because there’s this norm of moving halfway across the country.”

Ms. Guevara is quick to add that she doesn’t think it’s wrong for people to move far from family, but it’s a different cultural approach. Close family ties are “something that I really appreciate about … his culture, and I’m excited to have my kids be a part of it,” she says.

Why the British are firmly set on ‘pudding’