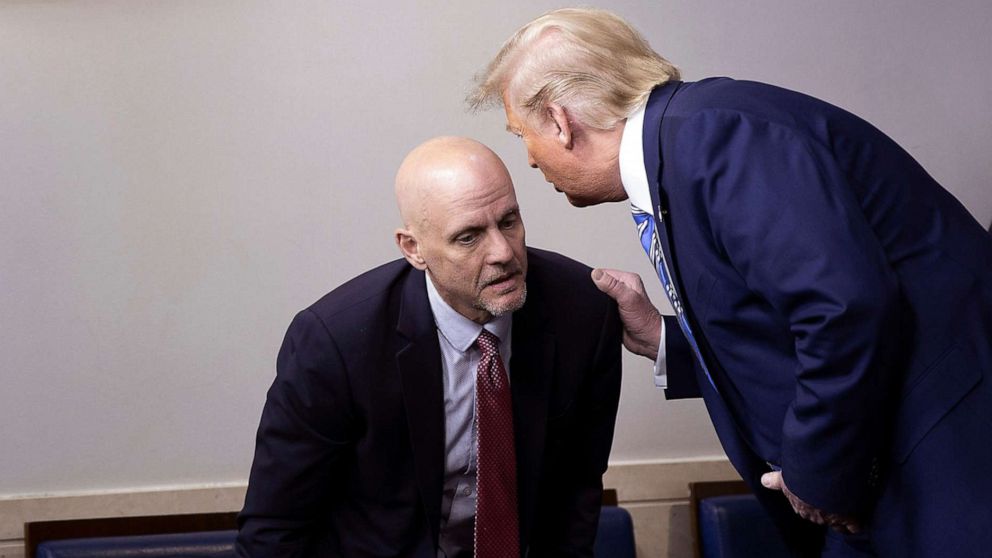 President Donald Trump’s critics have accused him of being many things, but subtle is not one of them. So when he mused aloud in August that a coronavirus vaccine could be ready by Nov. 3 — Election Day, that is — there was alarm in the scientific community. Could it be that the president would force regulators to approve a vaccine on his political timeline, not on the research calendar?

“I’m the guy that got you the vaccine, I’m getting it by Election Day, vote for me — that’s essentially the message from Donald Trump,” said Jonathan Karl, ABC News’ Chief White House Correspondent, in the “20/20” primetime documentary, “The Shot: Race for the Vaccine.”

Almost immediately, public health experts said they feared the Food and Drug Administration, the world’s gold standard pharmaceutical regulator, might buckle under pressure from the most powerful voice in the land — and wondered whether its newly minted commissioner, Dr. Stephen Hahn, could withstand a showdown with a volatile president determined to hold on to power.

“I was really worried about how much this vaccine was going to be politicized,” said Dr. Paul Offit, a vaccine expert at the Children’s Hospital of Philadelphia and a member of an independent vaccine panel advising the FDA.

Offit said he grew increasingly concerned that the Trump administration “would just dip their hand into Operation Warp Speed, compelled by the fact that there was an election that was coming up, and say, ‘Here, here is my gift to the American public.'”

But Hahn, with the final say over the authorization process, held his ground.

Against the will of the president, the FDA announced in October that no vaccine candidate could seek authorization without a full two months of data from at least half the volunteers in the ongoing human trials.

The move effectively dispelled any chance of a vaccine by Election Day. The White House knew it, and Trump was livid. “Just another political hit job,” the president raged on Twitter, tagging Hahn’s official government account.

But vaccine safety advocates saw it as a major turning point, and they saw Hahn as a hero in the fight for scientific integrity.

“The key moment in this whole process was when Commissioner Hahn stood up, in October of 2020, and said, ‘I want two months of safety data,'” Offit said.

“[Hahn] knew the kind of blowback he was going to get from the administration,” said Offit. “Nonetheless, he stood up for the American public. And when he did that, I think we all breathed a sigh of relief.”

An oncologist by training, Hahn was barely a month into the job at the FDA when the first COVID-19 case arrived in the United States and thrust him into the center of a generation-defining crisis. It was certainly not how he anticipated he’d spend his entire tenure.

In an interview with ABC News, Hahn acknowledged making missteps along the way to Friday’s announcement that his agency would grant emergency authorization to a vaccine developed in record time. But with a product now being distributed to health care workers across the country, Hahn’s role in ensuring a safe and timely vaccine is garnering fresh praise.

“If we’re able to pull this off, it will be one of the most monumental public health achievements of our lives,” said former CDC acting director Dr. Richard Besser, CEO of the Robert Wood Johnson Foundation and ABC News’ former chief health and medical editor.

“I have never been more hopeful during this pandemic than I am right now,” Besser said, “and the reason for that is that I know the power of vaccines.”

The FDA traces its founding back the early 20th century, after a series of high-profile public health scandals prompted advocates to lobby for a centralized body to set nationwide standards for health safety.

Over the course of his first year as FDA commissioner, Hahn has frequently found himself caught between competing interests, from those advocating authorizations of therapeutics like hydroxychloroquine, which was later deemed questionable for COVID-19 patients, to scientists urging caution in promoting unproven treatments and vaccines.

“Of course there’s pressure,” Hahn told ABC News. “There’s pressure because the pandemic is such a significant public health event in this country, around the world, and we certainly understand that we need to move quickly.”

“But one thing that’s been our North Star,” he said, “is to allow the data and the science to guide what we do.”

At times, Hahn’s commitment to a science-first approach has been questioned. In August, he faced withering criticism from scientists who accused him of promoting misleadingly rosy statistics to demonstrate the efficacy of a fledgling convalescent plasma treatment for COVID-19. He later apologized on Twitter, calling scrutiny of his comments “entirely justified.”

Months earlier, a more troubling development had attracted the ire of health advocates. In March, as Trump and his allies touted use of the anti-malarial drug hydroxychloroquine for COVID-19 patients, the FDA granted emergency use authorization for the treatment, raising questions about whether the move was politically motivated to vindicate the president after Trump’s repeated pronouncements that the drug was a magic cure for the virus.

In June, however, the FDA revoked its authorization of the drug after new evidence suggested it may actually harm coronavirus patients. By early July, the FDA issued a bulletin warning health care providers not administer the drug outside of hospital settings for fear of prompting heart rhythm problems.

It was an embarrassing episode for health regulators, and further raised alarm bells with health safety advocates that politics may seep into the decision-making process for the authorization of prospective vaccines.

In interviews with ABC News, Hahn insisted that despite what he called his “missteps,” every decision the FDA has made was based on the best information available at the time.

“My analogy to this is what a doctor would have in the emergency room, where they have limited information but they need to make decisions that are lifesaving,” Hahn said. “As more information comes in, they adjust those decisions. That’s what America’s FDA has done.”

Despite the growing concern among health care safety advocates that these missteps would portend the politicization of a vaccine approval, many of those critics have now come out in support of Hahn’s handling of the emergency authorization of Pfizer’s vaccine — particularly as the president has maintained pressure on regulators.

On Friday, for example, as the FDA considered authorization of Pfizer’s product, Trump called the agency a “big, old, slow turtle.”

Later on Friday, ABC News reported that White House Chief of Staff Mark Meadows suggested in a phone call with Hahn that his job could be on the line if his agency didn’t authorize emergency use of the Pfizer vaccine by the end of the day.

The FDA did issue emergency use authorization for Pfizer’s vaccine later Friday, but Hahn has since denied that Meadows threatened his job.

“Representations in the press that I was threatened to be fired if we didn’t get it done by a certain date is inaccurate,” Hahn told reporters on a Saturday morning call.

In an interview on Sunday on ABC News’ “This Week,” Hahn maintained that he “was not going to discuss individual conversations” with members of the White House staff, but said “we were encouraged to move quickly.”

As Hahn approaches his one-year anniversary at the FDA — and, as a Trump political appointee, the end of his time leading the agency — more difficult decisions lie ahead. Regulators are now poised to consider authorizations for additional vaccine candidates, which will be crucial for executing a large-scale inoculation program, starting with Moderna’s vaccine as early as this week.

Local businesses share holiday gift ideas that are ‘Made in America’