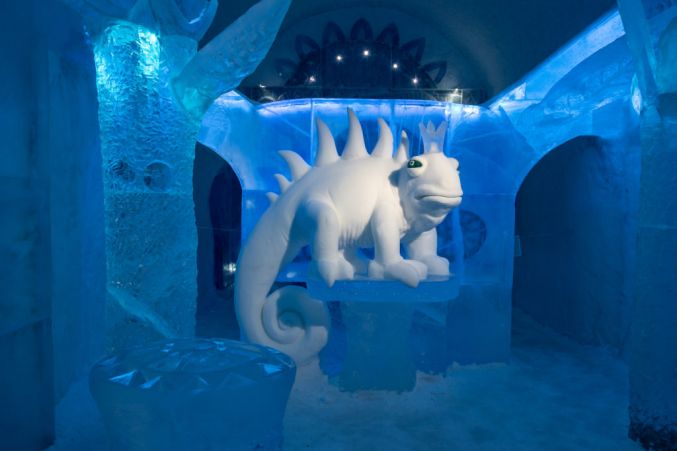 Defying the pandemic – and the conventional definition of ‘hotel’ – Sweden’s world-renowned Icehotel has revealed its new interiors for 2021, and they’re just as magnificent as you might expect.

An annual holiday hotspot that only opens for four months a year, large parts of the hotel are rebuilt from scratch every autumn, only to melt away into nothingness come spring.

Assembled from 2,500 tonnes of ice harvested from the frozen Torne River, this year’s structure marks the hotel’s 31st iteration, and contains ice equivalent to 700 million snowballs.

Somewhere between an igloo and an art exhibition, the building is filled with sculptures and snowscapes carved by a 35-strong team of local artists, and the chandeliers alone incorporate 1,000 individually crafted crystals.

This year’s hotel features 12 brand new suites (with six more coming later this month), each with its own individual theme. The ‘Toybox’ suite comes with icy alphabet blocks, rockets and other toys, while the more cerebral ‘You Are Here’ room is themed around thought and the human brain.

The ‘Dreaming In A Dream’ deluxe suite features a large centrepiece statue of a lizard, while the ‘Oh Rapunzel!’ suite is enveloped in the thick fur coat of a snow-cut Maltese dog.

New for this year, each suite comes with QR codes which, when scanned, provide audio information about the room and its sculptors. There’s also a sauna, a bar where the beers are always cold, and the forest-themed ‘Ceremony Hall’ – a popular place for winter weddings.

First opened in 1989, the hotel was the first and is still the largest of its kind in the world. However, since foreign visitors may be few and far between this year, the management have designed an augmented reality tour of the facility, accessible via Instagram.

Pandemic permitting, the hotel also offers a host of wintry activities, such as dogsledding, snowmobile riding, ice sculpting and viewing the Northern Lights, all of which have been revamped to comply with Covid regulations.

“The pandemic forced us to think differently,” says Luca Roncoroni, creative director of Icehotel, “but the result is a stunning homage to Sweden. The 35 artists created concepts that will mesmerise our guests, giving them a much-needed escape from the reality of this year.” The hotel will remain open until April 11.

5 of the most iconic handbags of all time

9 reasons you will miss your Christmas party this year