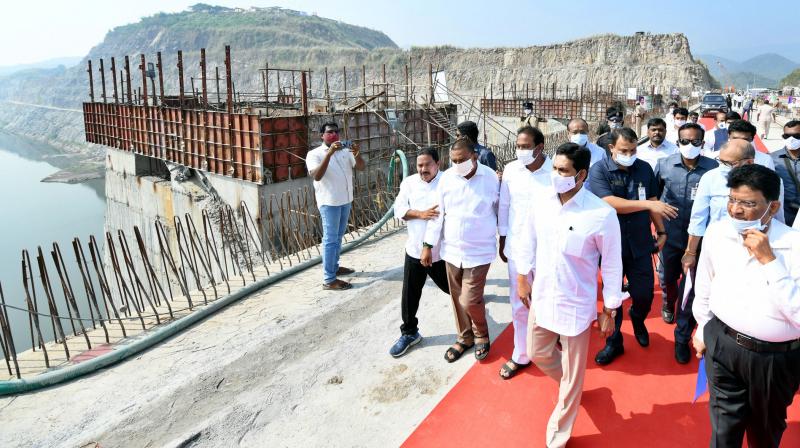 VIJAYAWADA: Chief Minister Y. S. Jagan Mohan Reddy has directed officials to adhere to the schedule of completing Polavaram Irrigation Project by end of 2021. He wishes to ensure that the project’s water is supplied before farmers start cultivating crops during the 2022 Kharif season.

After inspecting spillway works on the project, the CM reiterated his statement in State Legislative Assembly that height of the Polavaram Dam will not be reduced even by a millimetre. His assurance came after “mis-information campaign” that the project’s full reservoir level will be reduced from 55 metres to 45.72 metres.
Member secretary of Polavaram Project Authority also announced that height of the dam will be as approved by the Central Water Commission (CWC) and will never be decreased.

On resettlement and rehabilitation (R&R) of project-affected people, the Chief Minister instructed officials to first resettle those affected once the water level reaches 41.5 metres. The next to be resettled will be those affected after water level reaches 45.72 metres. He said Rs. 3,330 crore will be spent on rehabilitation, which must be completed by February or March, 2021.

The CM expressed concern that project bills pertaining to year 2018 were still pending. At this, officials informed him that they need some funds as advance for getting funds from the centre. Jagan Mohan Reddy assured that he will make all efforts to ensure no dues from the centre are pending.

Later, officials informed the Chief Minister a committee comprising officials from Water Resources, Polavaram Project Authority and CWC will be set up to resolve any issues arising in models, designs or construction of the dam.

Biden plays hardball as he seeks a mandate: The Note

TRS govt going down, BJP will come to power: Kishan