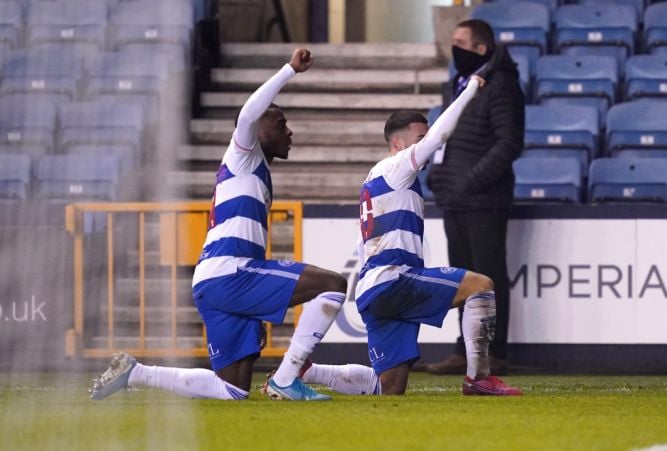 The gesture was booed by Millwall supporters earlier this month.

Taking the knee as an act of solidarity against racism continues to have the overwhelming support of professional footballers, according to the players’ union.

The gesture was booed by Millwall supporters before their home Championship game against Derby on December 5th, and in the Lions’ next match against QPR a decision was taken for the players to stand arm in arm instead.

However, the Professional Footballers’ Association says it has consulted with its membership and the vast majority want to continue taking the knee. The PFA also accused the EFL of showing “a lack of leadership” over the issue.

“Players overwhelmingly support continuing this act of solidarity despite any adverse responses that may be received,” a union statement said.

In light of recent negative crowd reactions and some clubs exploring an alternative to players taking the knee, the PFA has been in consultation with its members on the issue.

“The decision to take the knee before matches was initially made by Premier League captains during Project Restart, to show solidarity with black people facing discrimination globally.

“This powerful symbol of solidarity represents the players’ commitment to anti-racism and is not an endorsement of any political position. It is a peaceful act of unity that highlights a persistent and systemic issue.”

Millwall Supporters’ Club said the booing was targeted at the political views of the Black Lives Matter organisation, and not motivated by racism.

QPR players Ilias Chair and Bright Osayi-Samuel took the knee to celebrate a goal against Millwall.

Rangers’ director of football Les Ferdinand has previously spoken about how he feels the gesture has become “diluted” and is now “little more than good PR”.

Nevertheless, the PFA feels the continued support for the gesture among players provides the mandate for competitions to give it their full backing.

“While the Premier League has already committed to teams taking the knee for the duration of the season, players across the EFL have been left in a difficult position following a lack of leadership on the issue,” the PFA statement continued.

“The survey conducted by the PFA has shown overwhelming support for continuing to take a knee, and we hope this gives the EFL and the clubs involved the information needed to support the players.”

"It's embarrassing, unacceptable and we don't stand for that."#CamUTD pic.twitter.com/eTIvddMZIu

Cambridge manager Mark Bonner spoke out when a group of Us fans booed the gesture before a League Two match against Colchester on December 15th.

“What pleases me most is the small minority that booed were soon drowned out by loud applause by the majority that understand that this is about systemic racism and inequality,” he said.

“We’re right to back that message. We’ve clearly got more work to do because that behaviour’s unacceptable.”

Russia banned from using its name, flag at next 2 Olympics

Hosting all LPL matches at one venue was a real challenge, admits Godfrey Dabrera