The French President said he was still suffering “fatigue” after testing positive for coronavirus on Thursday and urged French people to “keep being careful”. In a video he posted on his social media pages, admitted he must have caught the virus in a moment of “carelessness” and “bad luck”. He said: “Good morning, it’s Friday.

“I wanted to address you because, as you know, from yesterday. After developing the first symptoms, I had the test and tested positive and have isolated as everyone has been advised to.

“I have been in contact with national and international politicians and officials, loved ones and they have been contacted. I wanted to thank you for all your messages of support, sympathy and solidarity.

“I wanted to reassure you I’m well, I have the same symptoms as yesterday, that is some fatigue like hundreds of you who have experienced this virus and experience it today.

“I will update you every day on the evolution of the disease. 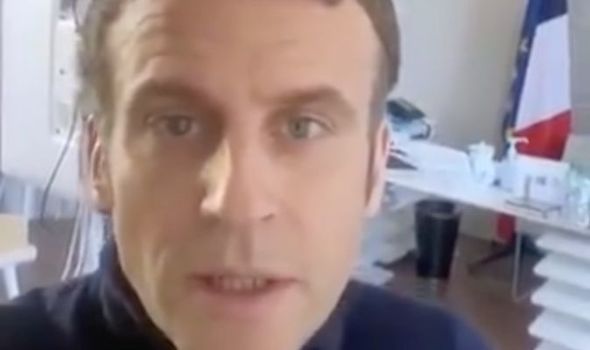 “There’s no reason to think this will develop badly but I am under observation and will update you, to be totally transparent.

“I continue to work on my brief and with the Prime Minister, the Government and my team I have an activity that is slightly slowed down because of the virus but priority issues are still being taken care of, whether it’s about the virus and the management of the epidemic or the Brexit issue.

“I also wanted to pass on a message for you, for us: keep being careful.

“Yesterday I tested positive and that shows the virus can reach everyone because I am very protected, I am very careful, I respect hygienic measures, I keep my distance, I wear a mask, clean my hands regularly.

“Despite all of this, I have still caught the virus. Maybe in a moment of carelessness a moment of bad luck as well. What is certain is that if I hadn’t respected the rules, the safety measures, I could have caught it earlier or have transmitted it to more people.

“So we must continue to respect these rules. I know this is a heavyweight for many of you and they are hard to respect. But we must resist.

“18,000 Frenchmen and women have tested positive for the virus. So it’s still there, stronger than before.

“We must be vigilant, we must take care of one another at this time of celebration.”

Statistics suggest Macron is unlikely to suffer the worst symptoms of the respiratory disease as he relatively young at 42, a non-smoker who is not overweight and has access to the best medical care.

Portugal’s Prime Minister Antonio Costa has cancelled official trips and is in self-isolation, his office said on Thursday, less than 24 hours after he met with the French President.

“The chancellor was tested a few days after the EU summit, as is routine,” a spokeswoman said, adding that the result of the test was negative.

“The chancellor sends the French president her best wishes for a speedy recovery,” she said.

US agency warns of ‘grave’ threat from long-undetected hack