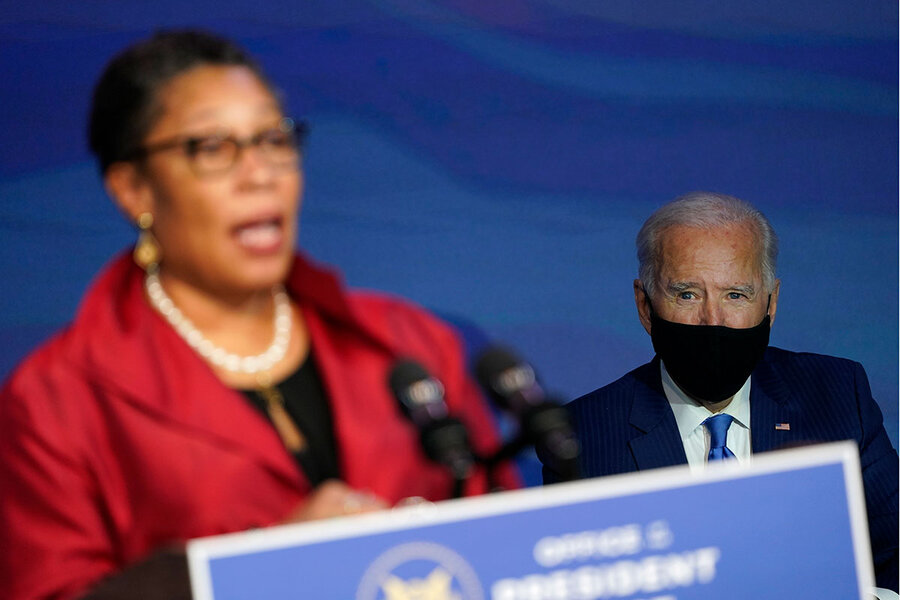 The Electoral College has spoken. Many (but not all) top Republicans now refer to Joseph R. Biden Jr. as president-elect. And Russian President Vladimir Putin, Brazilian President Jair Bolsonaro, and Mexican President Andrés Manuel López Obrador have all conveyed their congratulations, albeit belatedly.

President Donald Trump may never concede the Nov. 3 election, and there’s speculation he will hold his own event on Inauguration Day. Regardless, the impact of President Trump’s post-election actions may well be felt for some time to come: Most Republicans still believe unproven allegations of widespread voter fraud.

On Monday evening, in an address to the nation, Mr. Biden expressed righteous anger as he spoke of the myriad lawsuits aimed at overturning his victory – and then turned more hopeful in tone, as he called for unity and healing. His emotions were palpable to this reporter, who sat just a few feet away from the president-elect inside the historic Queen theater in his hometown of Wilmington, Delaware. It was a fortuitous moment to be the “pool reporter” for that day, covering the presidential transition.

Soon enough, Mr. Biden will be addressing the nation from the Capitol and eventually the Oval Office. But already, his presidency is taking shape. He has named much of his Cabinet and other top officials, including many from the Obama years, in which Mr. Biden served as vice president.

But this is more than just “getting the old gang back together.” It’s a reflection of the president-elect’s values as a leader – surrounding himself with people he knows and trusts, and who bring deep government experience to their roles at a time of national emergency.

Mr. Biden is also elevating new faces into positions of authority from all walks of life. His Cabinet is poised to be the most diverse in American history, as seen in today’s introduction of Pete Buttigieg , the former mayor of South Bend, Indiana – and former rival for the 2020 Democratic presidential nomination – as the nominee to run the Department of Transportation. If confirmed, Mr. Buttigieg will be the nation’s first openly gay Cabinet secretary.

But it’s the skills Mr. Biden’s team will bring to the table that matter most, veteran political observers say.

“Their experience is valuable,” David Axelrod, a former Obama adviser, tells the Associated Press. “Their values and outlooks are consonant with [Biden’s]. The challenge is to look forward and not back and innovate beyond what’s simply been broken.”

Energy Department says it was hacked in suspected Russian campaign