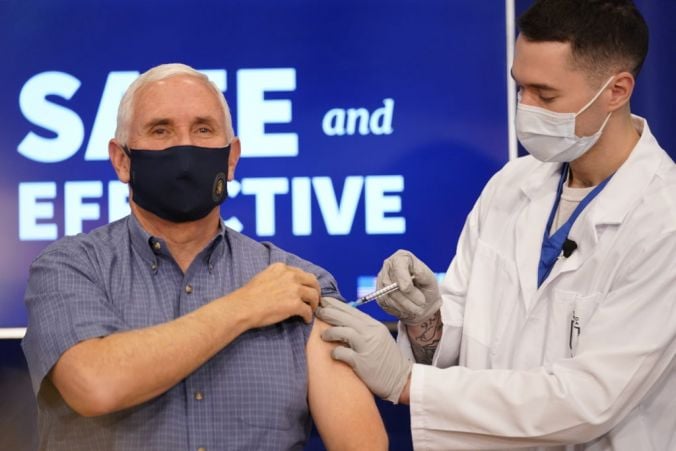 US Vice-President Mike Pence has received his first coronavirus jab live on TV alongside his wife Karen and Surgeon General Jerome Adams.

The trio were vaccinated on Friday morning in an office suite in the Eisenhower Executive Office Building from three medical technicians from Walter Reed National Military Medical Centre.

Mr Pence said the speed with which the vaccine was developed is “a medical miracle”.

“I didn’t feel a thing, well done,” Pence told the medics who administered his Pfizer/BioNTech shot early on Friday morning.

He did not flinch during the quick prick, nor did his wife or Mr Adams.

“The American people can be confident – we have one and, perhaps within hours, two safe vaccines,” he added, referring to expected Food and Drug Administration (FDA) approval for Moderna’s vaccine.

Pfizer/BioNTech’s vaccine was the first to be approved.

“Building confidence in the vaccine is what brings us here this morning,” he said.

Mr Adams emphasised “the importance of representation” in outreach to at-risk communities and encouraged Americans to avoid disinformation around the vaccines.

Operation Warp Speed – the US government campaign to help swiftly develop and distribute vaccines – was launched in  spring with great fanfare in the White House Rose Garden.

But five days into the largest vaccination campaign in the nation’s history, Mr Trump has held no public events to herald the rollout.

He has not been inoculated himself and has tweeted only twice about the vaccine.

Mr Pence, meanwhile, has taken centre stage – touring a vaccine production facility this week and receiving a dose himself on live TV.

House Speaker Nancy Pelosi and Senate Majority Leader Mitch McConnell both said on Thursday that they will get vaccinated in the next few days.

Many Trump aides are puzzled by his low profile now the vaccine is actually being injected.

They see it as a missed opportunity for the president, who leaves office at noon on January 20, to claim credit for helping oversee the speedy development and deployment of the vaccine.

It is expected to finally contain a virus that has killed more than 310,000 Americans.

Mr Trump has tried to minimise any credit that might go to his successor, Joe Biden, who will preside over the bulk of the nationwide injection campaign next year.

Mr Biden expects to receive his shot as soon as next week.

“Don’t let him take credit for the vaccines because the vaccines were me and I pushed people harder than they’ve ever been pushed before.”

Earlier, the head of the FDA said his agency will move to quickly authorise the Moderna vaccine, hours after it won the key endorsement of a government advisory panel.

Stephen Hahn said in a statement that regulators have communicated their plans to Moderna, which co-developed the vaccine with the National Institutes of Health.

The announcement came after a panel of FDA advisers, in a 20-0 vote, ruled the benefits of the vaccine outweighed the risks for those aged 18 and over.

Once FDA’s emergency use authorisation is granted, Moderna will begin shipping millions of doses, earmarked for health workers and nursing home residents, to boost the vaccination effort.