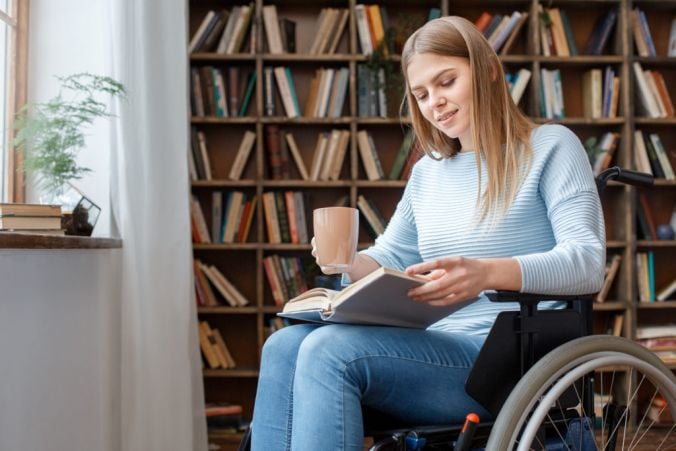 Young woman in a wheelchair reading

Many of us found ourselves with an unexpected amount of free time this year, meaning we could rediscover some of our favourite pastimes.

Yes, this probably involved watching everything on Netflix – but it also gave us the opportunity to sink our teeth into some really great books.

Reading can transport you to different worlds and teach you about cultures other than your own – something we’ve been desperately searching for this year, as we’ve been largely confined to our homes.

Amazon has released its lists of the bestselling and most read books of the year, giving valuable insight into our 2020 literary habits…

Self-help books have been a big hit

The dramatic events of 2020 have caused many of us to re-evaluate our lives and personal goals. This year of introspection is reflected in the amount of self-help books on the bestselling non-fiction list – such as Good Vibes, Good Life: How Self-Love Is The Key To Unlocking Your Greatness by Vex King (Hay House UK) and The Subtle Art of Not Giving a F*ck: A Counterintuitive Approach To Living A Good Life by Mark Manson (Harper).

The most highlighted book of the year is Atomic Habits by James Clear (Random House Business), detailing how you can make small changes in your life to build positive habits. This ranking shows how much the book resonated with readers, who were keen to remember key quotes.

Female authors dominate this year’s list, making up seven of the top 10 most sold fiction books. The bestselling book in this category is Where The Crawdads Sing by Delia Owens (Corsair), the 2018 coming-of-age story about an isolated young girl called Kya in North Carolina in the Fifties and Sixties.

Reni Eddo-Lodge takes the top spot for non-fiction with her 2017 debut Why I’m No Longer Talking To White People About Race (Bloomsbury Publishing), showing the appetite for anti-racist literature in the wake of the Black Lives Matter protests this year.

Celebrity names have a big draw

While it hasn’t been a particularly banner year for celebrity memoirs, Michelle Obama’s 2018 autobiography Becoming (Viking), came in an impressive fifth in the most sold non-fiction chart.

Harry Potter is as popular as ever

The first Harry Potter book might have come out in 1997, but the franchise is still going strong. Amazon does a separate ‘most read’ chart, tracking the average number of daily Kindle readers and Audible listeners every week.

Perhaps because adults were looking for a bit of comfort and nostalgia this year, plus a whole new generation of young fans had plenty of time to get reading, the seven Harry Potter books (Bloomsbury Children’s Books) filled the top seven slots of the most read list.

Does your asthma get worse in winter? Here’s what you need to know

Sweden’s Icehotel is back – and the new interiors are extraordinary

5 of the most iconic handbags of all time