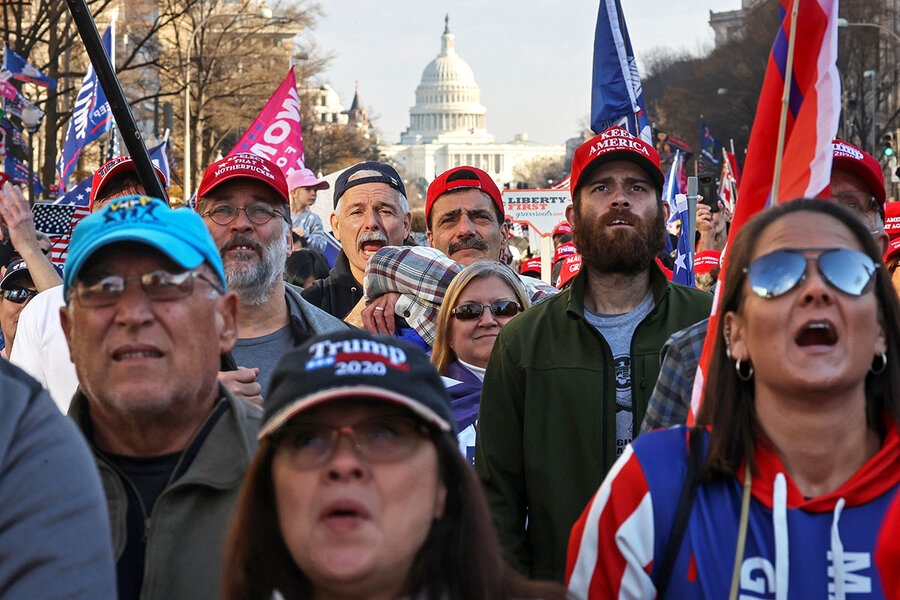 At the center of the biblical allusion in the “Jericho March” on the National Mall Saturday – a rally of thousands of religious conservatives who met to protest and pray to #stopthesteal – is a revelation of God’s miraculous power in the conquest of a promised land.

And like the prophet Joshua, who fought the battle of Jericho with blasts of trumpets and shouts of soldiers, organizers called on “all patriots and people of faith” to march a symbolic seven times around the Capitol Building in Washington “until the walls of voter fraud and corruption fall down and the American people are allowed to see the truth about this election.”

Expressing a religiously militant zeal, the majority of President Donald Trump’s religious base continues to feel certitude in that view, even after the Electoral College on Monday formalized President-elect Joe Biden’s 306-232 victory. And after Attorney General William Barr said he had seen no evidence of widespread fraud. And after the head of the Trump administration’s cybersecurity office called 2020 the most secure election in U.S. history.

“When God gives you a vision, you don’t need to know anything else,” said Eric Metaxas, a prominent conservative writer and the Jericho March’s emcee.

Rob Weaver, one of the event’s co-founders, said he received a vision of the march before helping to organize its events.

“God has shown us three very clear things,” he said. “That there are courts in heaven – which our marchers are taking to in prayer before the Lord – then there are the U.S. courts, the courts on Earth, and then there’s the court of public opinion.”

“We believe that God has called us and the church, in general, to focus on the courts in heaven as well as the court of public opinion,” continued Mr. Weaver.

There is a startling irony in this omission of the courts on Earth, however. White Evangelicals and other religious conservatives have for decades made controlling the federal judiciary a primary electoral focus – a focus that culminated in what will be one of President Trump’s most lasting legacies.

Which is why it came as a shock to so many Republicans that conservative judges in both state and federal courts were among the most emphatic in what became a uniform rejection of the president’s ongoing claims that Democratic elites and technocrats conspired to steal the U.S. presidency.

The president and his allies lost over 60 suits to date save one, a minor case early on. Those losses include two terse dismissals from the Supreme Court, of which three of nine justices were appointed by President Trump and which is itself dominated by Catholic conservatives.

While the judiciary has said the law and evidence come down decidedly on one side, “I’ve seen a lot of historians and others say that we will probably watch a new ‘lost cause’ kind of mythmaking basically happen in real time now, just like with the Civil War what happened in the South,” says Andrew Whitehead, professor of sociology at Indiana University-Purdue University Indianapolis. It is a framework with which he agrees.

“A lot of people are trying to understand this current cultural moment in light of religious history, given how widespread support for President Trump remains, and what this might mean,” he continues.

The mythology of the Lost Cause was rooted in a sense of cognitive dissonance and historical revisionism that would recalibrate a Southern sense of identity. That identity is mostly rooted in 19th-century forms of evangelical Protestantism, says Bill Leonard, founding dean and professor of divinity emeritus at Wake Forest University School of Divinity in Winston-Salem, North Carolina.

“It portrayed the South as the prime preserver of the original myth of America as Redeemer Nation,” a form of Christian nationalism long embedded in the larger American psyche, says Professor Leonard. “For these Southern Protestants, the Lost Cause meant that the people who lost the war retained that vision. The defeated people, even in defeat, would be more moral, more orthodox, and more ‘Christian’ than their northern counterparts had been or ever could be.”

Indeed, on their website, the organizers of the Jericho March proclaim this idea using another famous trope of American exceptionalism and Christian nationalism.

“America is a city on a hill and light to other nations, and God’s favor is still upon her,” the site proclaims. “We are proud of the American system of governance established by our Founding Fathers and we will not let globalists, socialists, and communists destroy our beautiful nation by sidestepping our laws and suppressing the will of the American people through their fraudulent and illegal activities in this election.”

But in the complicated histories of American evangelical Protestants there has also long been a particular understanding of how a person is able to perceive truth, says Kristin Kobes Du Mez, professor of American history at Calvin University, an evangelical institution in Grand Rapids, Michigan.

In many ways, ever since the Scopes trial nearly 100 years ago, American evangelicals have remained skeptical of secular science and any kind of expertise divorced from a religiously-based world view.

“It’s a kind of direct access to God’s word, which is especially common within the charismatic corner of evangelicalism,” Professor Du Mez says. “You know, ‘God spoke to me, God laid it on my heart.’ And so you have this kind of direct access to truth and no outside information is able to challenge the certainty there – and we’re now seeing the influence of charismatic Christianity in there in the Trump base.”

In a much discussed conversation with the conservative radio show host Charlie Kirk last week, Mr. Metaxas summarily dismissed the findings of all levels of the American judiciary.

“You firmly believe and I firmly believe that Trump actually won and there has been massive fraud,” said Mr. Metaxas, author of biographies of Martin Luther and Dietrich Bonhoeffer. “So let’s just stop. You believe that. So my attitude is like, so, who cares what I can prove in courts? And I’m going to do anything I can to uncover this horror, this evil.”

When Mr. Kirk later asked Mr. Metaxas his thoughts on the status of the president’s cases in court, he simply replied, “I am thrilled to be too ignorant of the details to answer that question in any substantive way.”

While Professor Whitehead and his colleagues have correlated the impulses of Christian nationalism with a deep skepticism of science and the reliability of secular elites, one of its primary characteristics is “this belief and this desire to see a particular type of Christianity privileged in the public sphere again” – one of the reasons the Trump campaign’s slogan, “Make America Great Again,” has resonated so deeply with religious conservatives.

At the same time, too, President Trump and many conservatives have focused their most intense allegations of widespread election fraud in cities such as Philadelphia, Detroit, Milwaukee, and Atlanta, each in battleground states Mr. Biden won. (Mr. Trump actually performed better in several of those cities than he did in 2016.)

“‘Democrat-led city’ – that’s code for Black,” the Rev. William J. Barber II, president of the civil rights group Repairers of the Breach, told The New York Times. “They’re coupling ‘city’ and ‘fraud,’ and those two words have been used throughout the years. This is an old playbook being used in the modern time, and people should be aware of that.”

Us vs. them mentality

And like the Lost Cause mythologies of the post-Civil War South, there is a deep sense of victimhood undergirding the kind of Christian nationalism that has engulfed many Trump supporters. As the president said at a rally in Georgia this month, “We’re all victims. Everybody here, all these thousands of people here tonight, they’re all victims. Every one of you.”

Indeed, the rhetoric of those insisting the election was stolen has become more militant and at times violent.

Gen. Michael Flynn and others last month urged President Trump to “temporarily suspend the Constitution,” impose martial law and have the military oversee a revote, and “silence the destructive media.” Trump attorney Lin Wood posted pictures of Republican officials in Georgia wearing face masks designed as Chinese flags, saying, “They will soon be going to jail.”

At the Jericho March on Saturday, before the opera singer Stephanie D’Urso sang “Ave Maria,” she told the crowd, “Are you hearing what I am hearing? I am hearing an army of angels coming from heaven to help our beautiful president win this battle of good versus evil.”

Prominent evangelical thinkers such as Beth Moore and David French have decried “the dangerous idolatry of Donald Trump” in evangelical circles and rallies such as the Jericho March. “They believe that Trump had a special purpose and a special calling, and that this election defeat is nothing less than a manifestation of a satanic effort to disrupt God’s plan for this nation,” Mr. French wrote in The Dispatch. “They were not ‘holding their nose’ to support him. They were deeply, spiritually, and personally invested in his political success.”

And the current commitment to Christian nationalism and a lost cause of a stolen election stands in tension with the wider traditions of the Christian faith, says Professor Du Mez, author of “Jesus and John Wayne: How White Evangelicals Corrupted a Faith and Fractured a Nation.”

“It’s a cause that really works against any perception of the common good, or any idea of loving your neighbor as yourself, or any idea of common grace, that there can be goodness and human flourishing and truth outside of your church, your sect, or, you know, your base,” she says.

Texas doctors in rural hotspots left out in cold on vaccine

Why Biden isn’t just ‘getting the old gang back together’