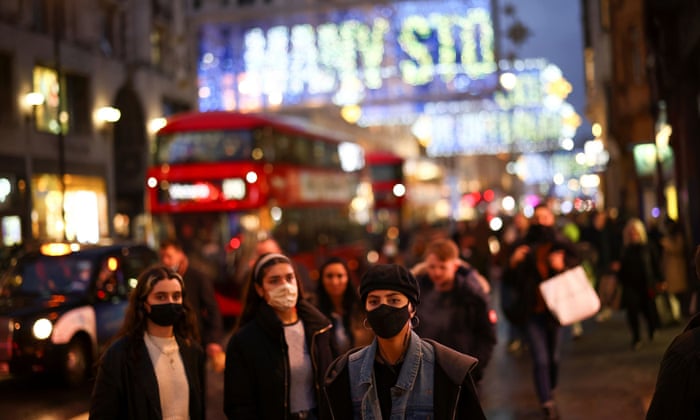 There are fears a new variant of coronavirus may be speeding up the spread of Covid-19, particularly in south-east England.

Public Health England (PHE) said, as of 13 December, 1,108 cases with this new variant had been identified, predominantly in the south and east of England.

Is this something to be worried about?

It is premature to make any claims about the potential impacts of virus mutation. But if the virus spreads faster it will be harder to control. That said, there have already been various strains of Covid-19 of no real consequence. It could potentially be serious, but not enough is known, and the surveillance and research will continue.

Why is coronavirus rising in parts of southern England?

One factor could be the new strain, which has shown up in England’s genomic surveillance in the past two months. The strain contains a number of mutations and has been detected in parts of the south where cases of the virus are rising fastest, according to the health secretary, Matt Hancock.

He said initial analysis suggested the new strain was growing faster than existing variants. Though predominantly in the south, more than 1,000 cases have been spotted in nearly 60 local authorities “and the numbers are growing rapidly”, he said.

Is the new strain more dangerous?

There is no suggestion that the virus is any more dangerous than other Sars-CoV-2 coronaviruses. A more complete picture of whether it is linked to differences in symptoms or the duration or severity of disease will emerge as scientists collect additional data. Researchers on the Covid-19 Genomics UK (Cog-UK) consortium detected the variant and will be monitoring its movement around the country. They analyse the genetic code of about 10% of coronavirus cases and share the sequences immediately.

Viruses acquire mutations all the time. Most have little or no effect, and some will hinder the virus, leading those mutations to die out. But mutations are possible that make the virus transmit faster.

The new variant has multiple mutations in the coronavirus spike protein, the most troubling of which appears to be what scientists call a deletion – in this case, the loss of two amino acids from the spike protein – which may make it spread more easily. The same deletion has been spotted in coronaviruses in several countries since the spring, but at low levels. It began to take off in southern England in August and September.

The same deletion was spotted when samples of virus were collected from a Cambridge patient with a weakened immune system. The patient was treated with convalescent plasma – blood plasma containing antibodies from a recovered patient. The virus acquired the mutation during that treatment and may have become more resistant to the antibodies. The patient ultimately died of the infection.

“We think there’s a mechanism for the virus to start escaping,” said Ravi Gupta, professor of clinical microbiology at the Cambridge Institute of Therapeutic Immunology and Infectious Disease at the University of Cambridge. “We need to crack down on it. We don’t know what it’s going to do long term but we can’t take a chance on it. It’s unlikely it’ll make people sicker, but it could make it harder to control.”

What does this mean for vaccines?

Because viruses mutate, there is always the chance a new strain will emerge that is resistant to existing vaccines. Most Covid vaccines produce antibodies that disable the virus by gumming up its spike proteins. These stud the surface of the virus and help it enter human cells. If the spike protein mutates, as it has in the new variant, it could potentially evade antibodies generated by vaccines using an older version of the spike protein.

But two points are important. First, vaccines produce a range of antibodies that attack the virus from different angles, so it is hard for it to evade all of them at once. Second, major mutations would probably affect the virus’s ability to infect human cells. Geneticists are already monitoring the virus for mutant forms that achieve what they call “vaccine escape”. Research is now under way at Porton Down and other labs to check whether the new strain could pose problems. If the virus does mutate into a resistant form, vaccines can be tweaked to make them effective again.

Dr Michael Ryan, the executive director of the World Health Organization (WHO) emergencies programme, said it was aware of the variant. “This kind of evolution and mutations are actually quite common,” he said. “The question, as we’ve had most recently with the mink variants in Denmark and previous variations, is: does this make the virus more serious? Does it allow the virus to transmit more easily? Does it in any way interfere with diagnostics? Would it in any way interfere with vaccine effectiveness? None of these questions are addressed yet.”

What else might have caused cases to rise in southern England?

Causes combine in different ways in different areas to drive local outbreaks. In the capital, the pandemic has pushed many people from city centre offices into more residential areas. These have become busier as a result, particularly the boroughs with the greatest housing density. As the second national lockdown was less stringent than the first, with schools and more shops open, and London exited into tier 2 in December, conditions were ripe in some boroughs for cases to increase. “You suddenly have a situation where because so many people live there, you can supercharge the spread,” said James Cheshire, a professor of geographic information and cartography at University College London.

Was London put into the wrong tier post-lockdown?

Within weeks of Boris Johnson introducing the three-tier system in October, scientists on Sage had evidence that only tier 3 had a substantial impact on transmission of the virus. The rise in cases in London confirms that conclusion. Tier 3 restrictions have helped drive down infections in Bristol, reversing what had been a sharp rise.

“I suspect that what we are seeing is that tier 2 is not effective enough at preventing the transmission of Covid, so as soon as the national lockdown ended again and people started mixing more – especially in a high-density area like London – the disease spread,” said Richard Harris, a professor of quantitative social geography at Bristol University.

“London is a large, high-density city with a young population and commuting patterns that extend across the south-east,” he added. “It appears to have come out of tighter controls too soon, no doubt driven by the economic cost to it and also to the whole country of putting it into tier 3.”

Why did the virus surge later in the south compared with northern England?

One theory is that the first national lockdown was eased when cases were lower in the south than the north. The outbreak bounced back rapidly in parts of northern England and the Midlands, but it took more time to re-establish widespread transmission in London and other parts of the south. But there are other factors at play.

Many of the worst-hit areas in Liverpool, Manchester and Birmingham are among the poorest in the country, and coronavirus spreads faster in more deprived areas. Employment plays a large role. In the south, a larger proportion of the workforce could work from home, avoiding public transport and contact with others. Those with more secure jobs were under less pressure to work when they felt ill, and were better able to self-isolate if they caught the infection.