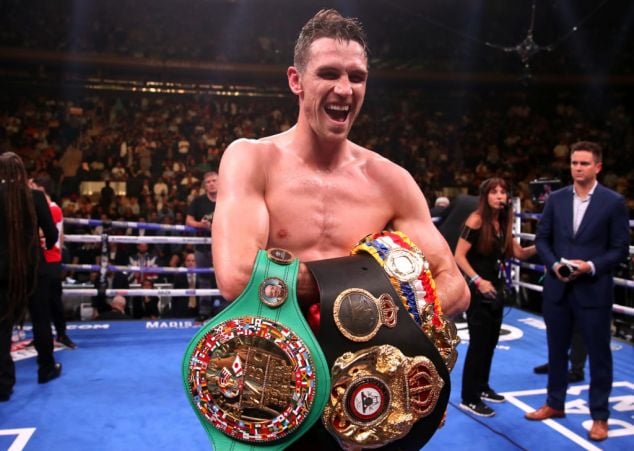 Callum Smith believes his prowess is just as important as his physical advantages over Saul ‘Canelo’ Alvarez ahead of their showdown this weekend, as the Liverpudlian insisted: “I’m not just a big lump with limited ability.”

The 6ft 3in Smith is set to make the third defence of his WBA super-middleweight title at Texas’ Alamodome, where the vacant WBC crown will also be on the line, against an opponent seven inches shorter than him.

Smith also boasts a seven-and-a-half-inch reach advantage over Alvarez but the Mexican superstar is likely to be undaunted at being the smaller man, having beaten taller and rangier fighters on a number of occasions in the past.

Both on the button! It’s nearly time!! #CaneloSmith @daznboxing 🔥🔥 pic.twitter.com/fH4vnSbCPf

However, this Saturday may be one step too far for Alvarez, according to the unbeaten Smith, who trusts his talent to catapult him to what would undoubtedly be the biggest victory of his professional career.

“I’m not just a big lump with limited ability, I believe I have got skills to go with it,” said Smith (27-0, 19KOs), who weighed in at the super-middleweight limit of 168lbs, as did Alvarez.

“I don’t believe I’d be in the position I am now if I had no skills and ability. Tactically I believe we have it spot on and I just have to perform and do exactly what I know I can.

“I’ve watched Canelo over the years as a fan and I enjoy watching him, but I’ve always watched him believing if that was me in there I believe I can beat him.

“I’ve always felt I have the style to do it and I’ve got a chance to prove it.”

Alvarez is regarded by many as the best pound-for-pound fighter in the world but Smith, who cut a relaxed figure at the final pre-fight press conference, insists he is not putting his foe on a pedestal.

“I have to treat Canelo Alvarez like any other fighter,” said Smith, who also holds The Ring Magazine title at 12st.

“I’m a world champion, believe in my own ability and believe I can beat anybody.

Since then Alvarez (53-1-2, 36KOs) has beaten the likes of Gennady Golovkin, Daniel Jacobs and Sergey Kovalev, and he will step in as favourite against Smith, who is a 4-1 underdog with many leading bookmakers.

But Smith, who has officially had just a month’s notice to prepare for this fight, said: “I’ve finally got the fight I wanted and I’m in a very good place. There’s no bigger fight possible for me.

“Mentally and physically I feel really good and ready to perform. I’m just excited. I can’t get worked up or nervous or anything, I’m in a position I’ve always wanted to be in.”