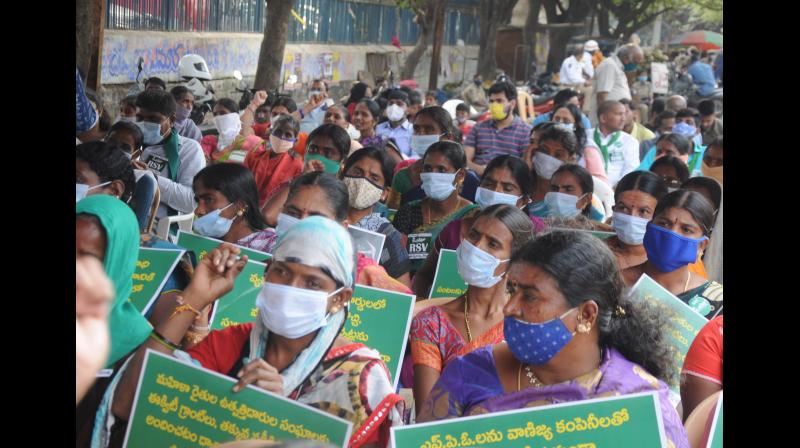 HYDERABAD: Farmers of Telangana have shown solidarity with their protesting counterparts in Delhi, who are agitating against the three farm bills enacted by BJP-led NDA government, which have become laws with President Ram Nath Kovind okaying them.

The Telangana farmers’ solidarity is by way of an indefinite protest they have started at the Dharna Chowk abutting Indira Park in the city. Those who protested included tenant and women farmers, agricultural labour from different parts of Telangana, social activists, and general public.

Damarakonda Kumaraih from Warangal Rural district, who is a agriculturist and owns one and half acres of land, told Deccan Chronicle: “These three farm laws will turn farmers like us into slaves of corporate bigwigs. The Union government has sold the fate of Indian farmers to rich corporates. We are protesting as we want the centre to rescind the laws to protect families whose livelihood depends only on cultivation,” he stated.

Among the protestors is Duddeda Sugunama, 45, an agriculture labourer with three daughters. She had received the Best Farmer Award in 2010 in the United States of America (USA). When she got the US award, the then state government promised to grant her agriculture land, which has not fructified so far. As such, Sugunama continues to be a tenant farmer. Sugunama’s son committed suicide when the family went into debts after their crops had failed due to drought and pest attacks, due to which they could not pay rent for the land they were cultivating.

Says Sugunama: “There have been many farmers who have committed suicide after they repeatedly failed to make any profit on their crop. These new laws, which have been framed by the central government, will force many more farmers to take their own lives in the coming times, as corporate entities will squeeze them for their own profits.”

Rekha of Katkur village in Jangoan district maintained: “All governments are anti-farmer. Funds under the Rythu Bandhu scheme of TRS government are being given mostly to those who own farm lands. These funds are being denied to tenant farmers and agricultural labour, as they have not been put on the beneficiaries’ list.” Rekha maintains that the KCR government is depositing Rythu Bandhu funds into accounts of absentee farmers, many of whom are working in USA.

The protest at Dharna Chowk is being organised under the auspices of AIKSCC, Makam, CCC, Rythu Swarajya Vedika, Palamur Adhyana Vedika, and TVVU.