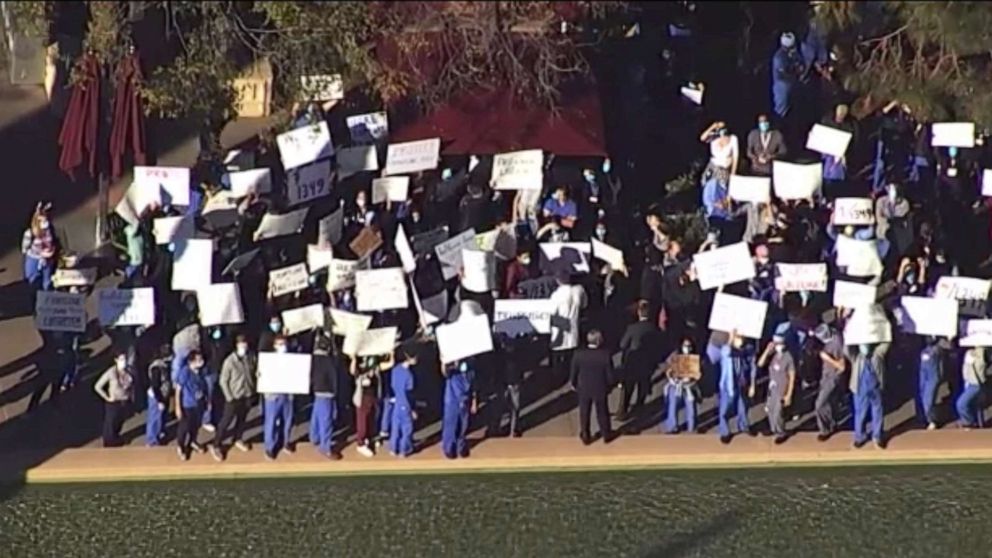 Protesters chanted “We are not disposable,” and held signs that said, “Front line workers need protection,” “Vaccinate health care heroes” and “Residents can die too” as they demonstrated at the Palo Alto, California, hospital.

According to a medicine chief resident who spoke during the protest, only seven of the resident health staff, “including none of what we would consider the front-line residents,” were slated to get vaccinated in the first wave of thousands of doses the hospital received.

“We are furious and angry with you,” another chief resident said during the protest. “We cannot be first in the room and back of the line.”

There are over 1,300 residents and fellows.

Organizers said they were representing other front-line health care workers, including nurses and respiratory therapists, who they claim also weren’t prioritized in the first wave of vaccine distribution.

Stanford Health Care President and CEO David Entwhistle addressed the protesters on Friday, saying, “We’ll correct it. We know that it’s wrong,” according to the San Francisco Chronicle.

Stanford Health Care announced Wednesday that Stanford Medicine expected to receive its first shipment of 3,900 COVID-19 vaccines on Friday, with as many or more doses to follow weekly.

“In accordance with federal recommendations, the first Stanford health care workers to be vaccinated will be those who provide direct care and service to patients, those who are at the highest risk of being exposed to COVID-19 and those who have an elevated risk of complications from the disease,” the press release said.

But the protesters allege that an error in an algorithm used to equitably distribute the vaccine pushed residents down the list given factors like their young age, but was not corrected.

Officials said they expected all Stanford Medicine health care workers will be vaccinated within two or three months.

“Despite our best intentions to thoughtfully map out a principled vaccine plan to include our residents, fellows, and faculty, it’s clear there were several unintended missteps,” the email said. “Please know the perceived lack of priority for residents and fellows was not the intent at all.”

“Stanford EM stands by our residents as the most front line of all providers against the COVID pandemic,” Stanford Emergency Medicine tweeted. “They must be protected and we will do whatever is necessary to ensure this happens.”

The Department of Urology said it found the algorithm “appalling,” and that faculty have volunteered that their spots in the line go to “trainees on the front lines to make this right.”

The protest comes as California is experiencing a surge in COVID-19 cases that has strained hospitals across the state. Over the past two weeks, the seven-day average cases increased 117% and hospitalizations increased 70%, officials said Friday. Intensive care unit capacity is down to 2.1% statewide.