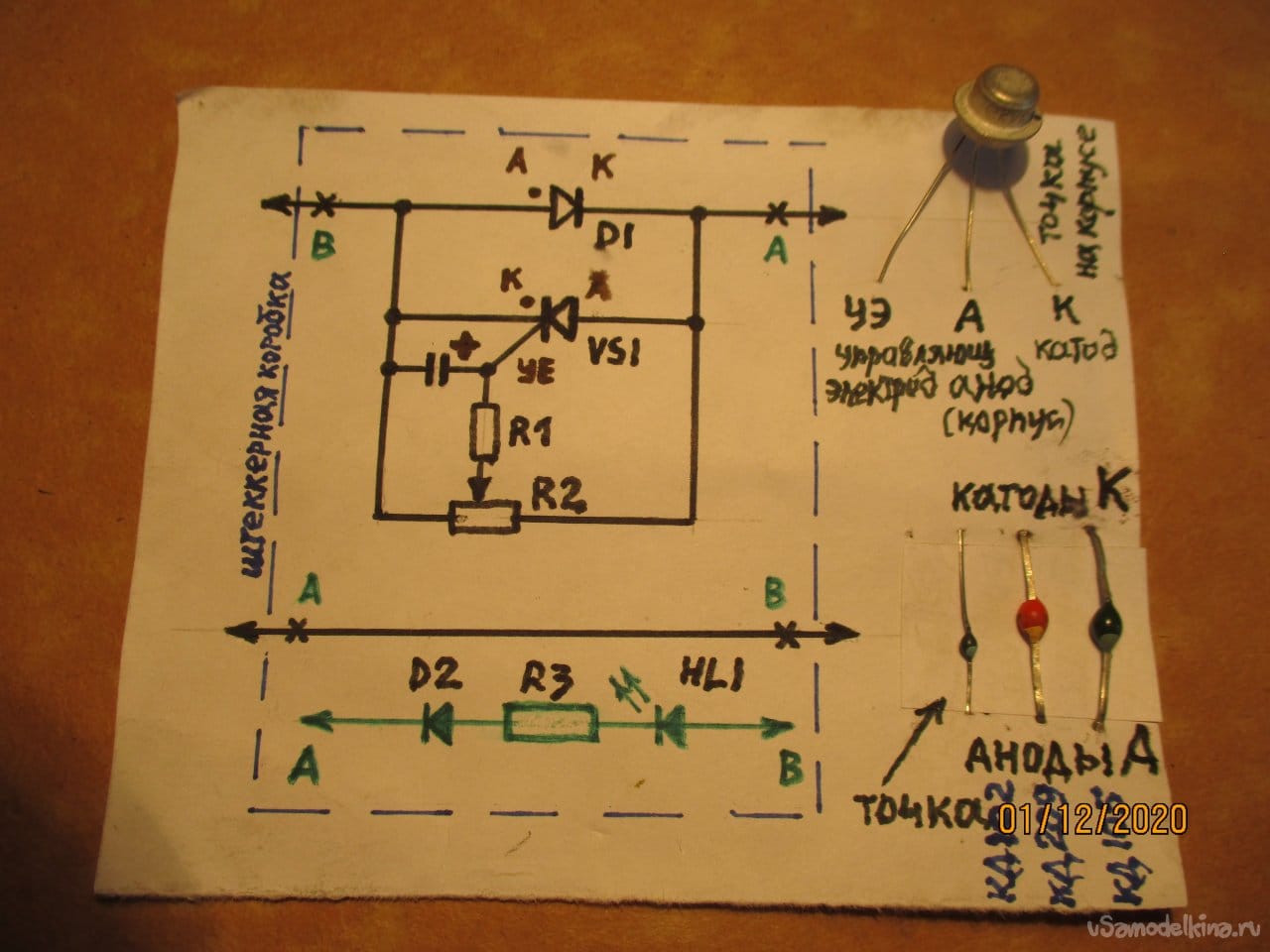 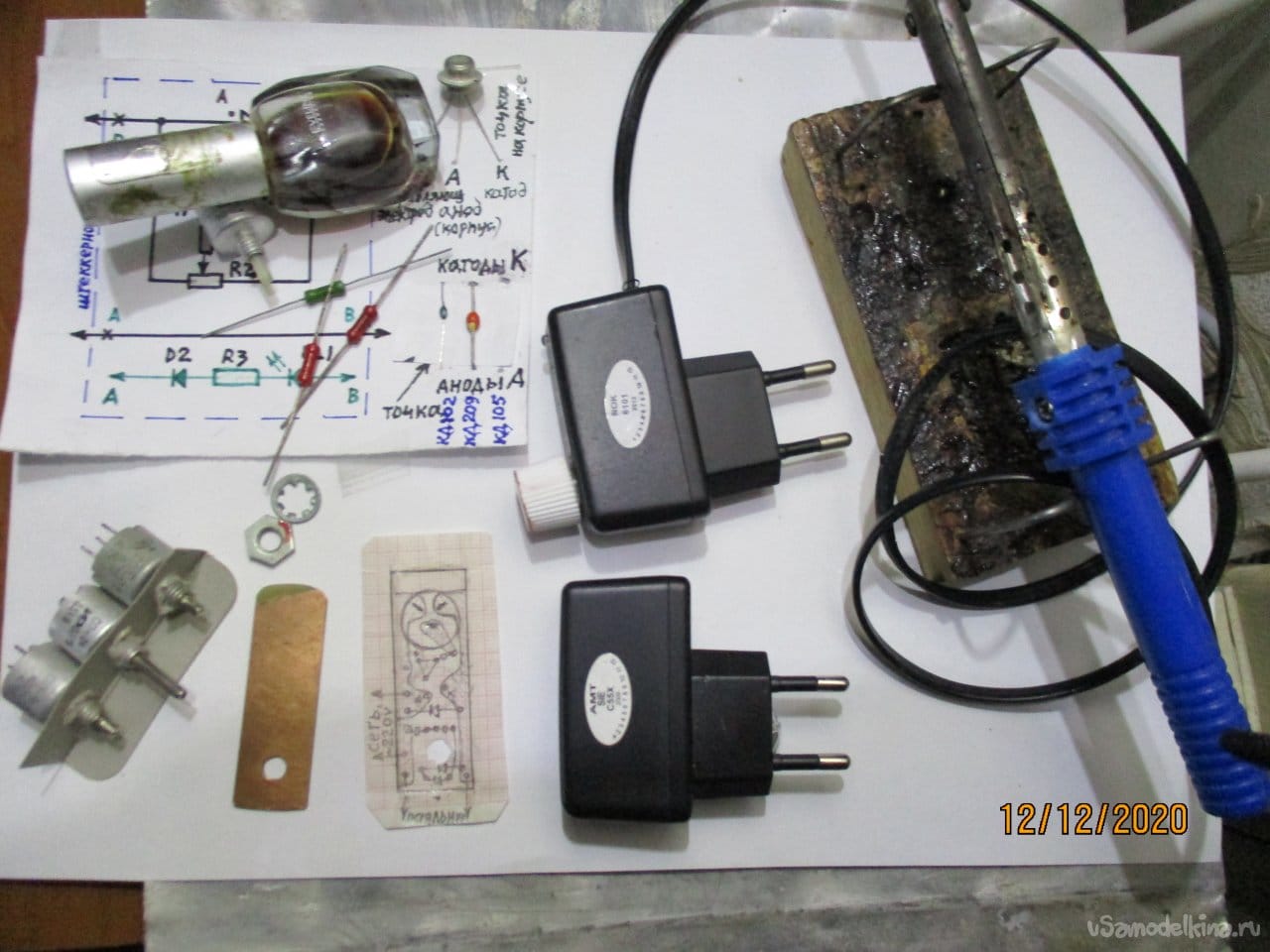 The plug box was taken from a faulty Chinese-made charger on the body of which the stamp “TOPSTAR” is extruded. A year later, I came across exactly the same Chinese box, but with the stamp “AMT Style”. I decided to make the same regulator in it, but for a 90W soldering iron. But the question is, will the diode and thyristor stand and not heat up? To check, I soldered the circuit on a breadboard and loaded it with two lamps connected in parallel, 220 V and 60 W each. I connected one lamp – nothing heats up, two lamps – barely perceptible heating of the thyristor at a power of 120 W and an approximate current of 0.5 A (0.25A per diode and thyristor). How many times I am convinced of the excellent characteristics of Soviet thyristors and diodes, which have a very low internal resistance in the open state and with a large margin of voltage and power!
A properly soldered circuit does not need adjustment, except for the selection of R3 (from 100 KΩ and above), according to the desired brightness of the LED. Since there is enough space in the box, I used MLT-0.5 resistors, R3 consists of two resistors connected in series. 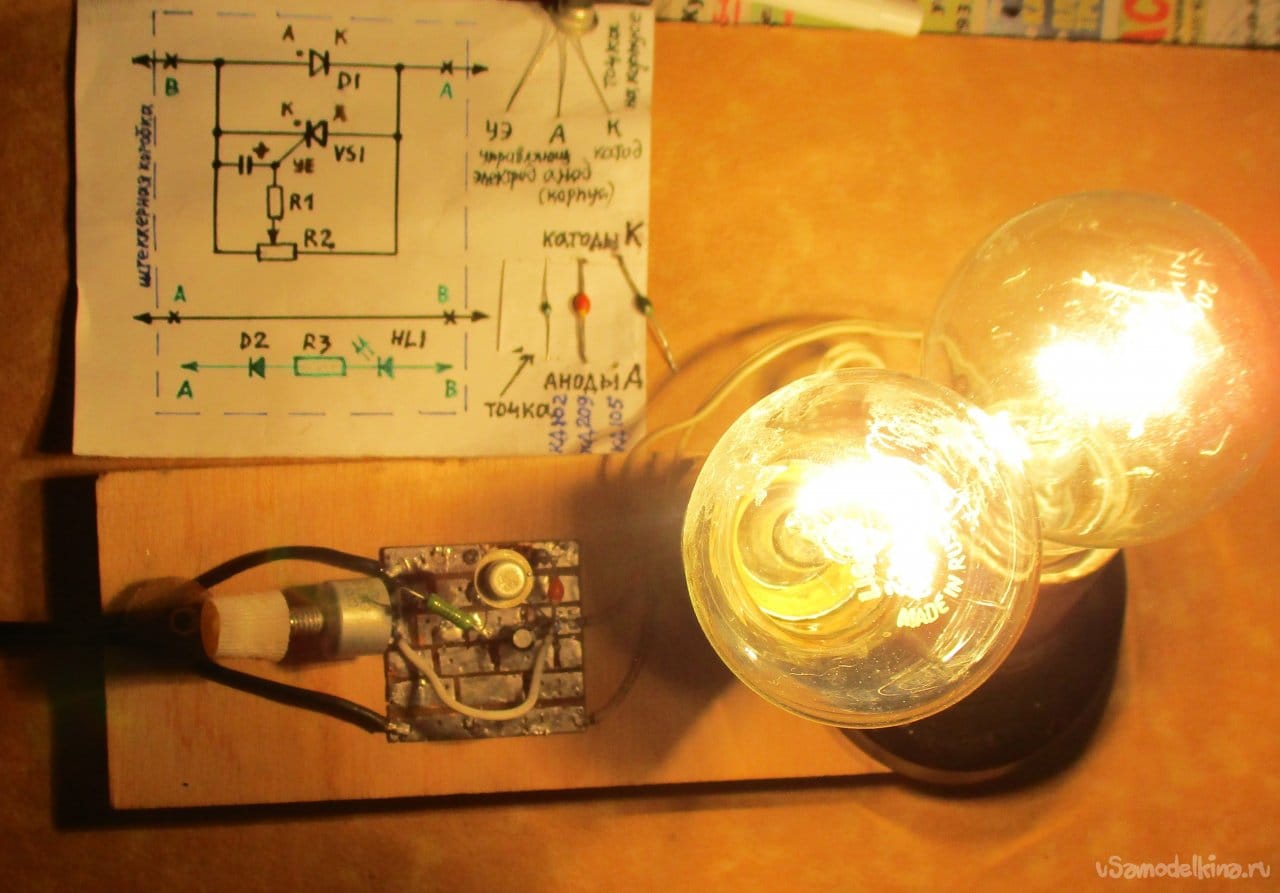 And now about making.
First, we drill a hole d = 6mm and install a variable resistor in the box opposite the power plug. Cut off a piece of fiberglass with dimensions of 52: 17mm and adjust (with a file) to fit into the case. We take a piece of graph paper (you can from a notebook in a box) and wrap the future board in it, copper to paper. Draw the paths with a pencil, taking into account the dimensions of the parts used. Let's put it on, for example, with a sharpened nail, an awl. We take out the board from the paper, drill, marked with a center punch, holes d = 0.6 – 1.0 mm. We clean the board with a fine-grained (zero) sandpaper, transfer the drawing from paper to the board, first with a pencil, and then with the help of a glass reeder (tube) – tsaponlak. We put, carefully, with the pattern down, in a solution of ferric chloride so that the board floats. After a time of 5-30 minutes, depending on the quality of the solution, if the board is thin, illuminating the board from above, you can see the etched pattern of the tracks. Tsaponlak is easily removed if acetone is dropped on a wet cloth (cotton wool). We clean it again with a “zero”, wipe (necessarily!) From dust and apply a solution of rosin in acetone (1: 3) to the tracks with a brush. alcohol, officially, for the solution, can not be bought anywhere. Maybe for the best, acetone dries quickly. The bottle with a brush is a former container of nail polish. The pattern on the board is simple and can be cut with a cutter. The board itself is fixed in the case by soldering to the terminals of the variable resistor. 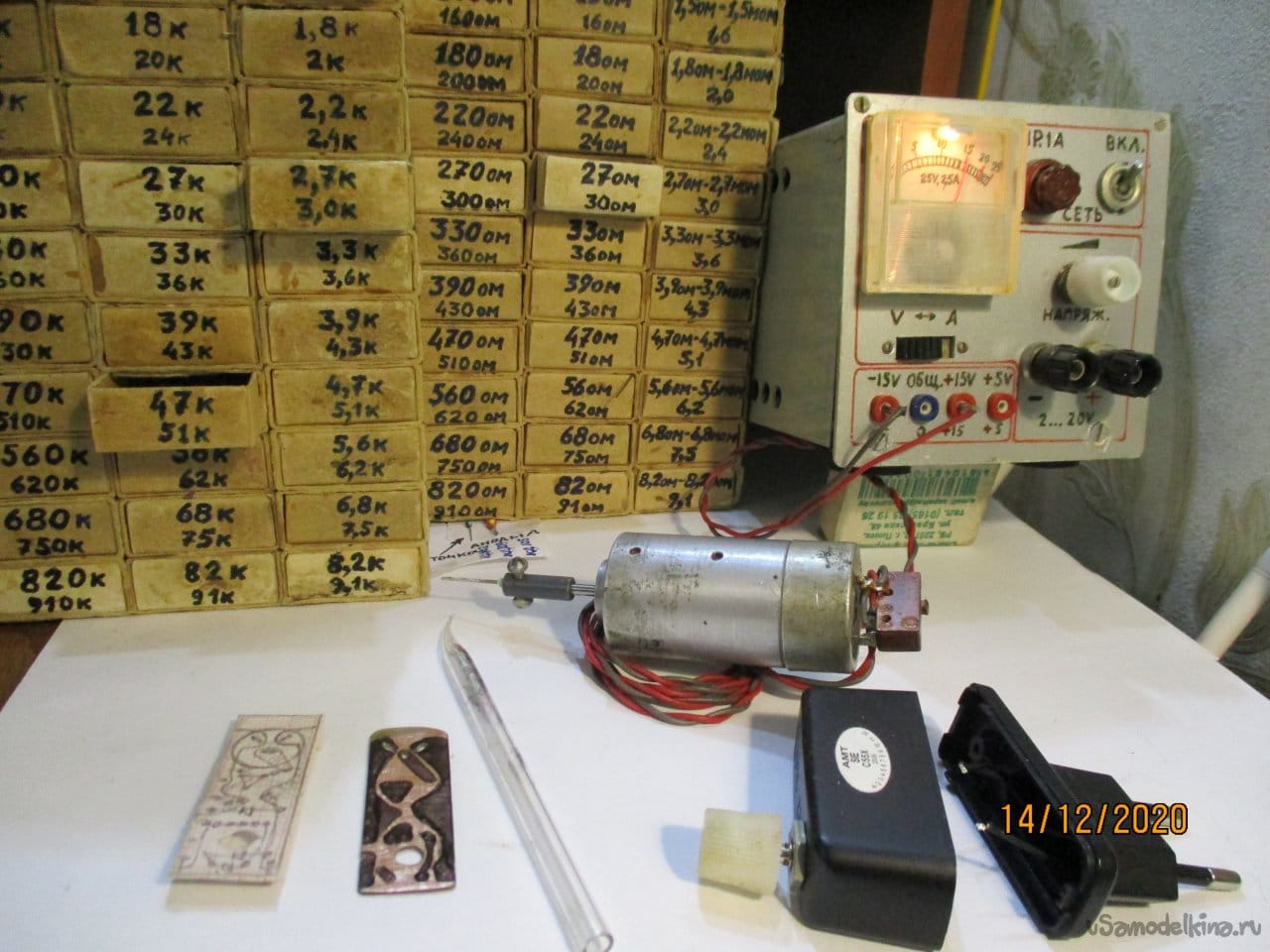 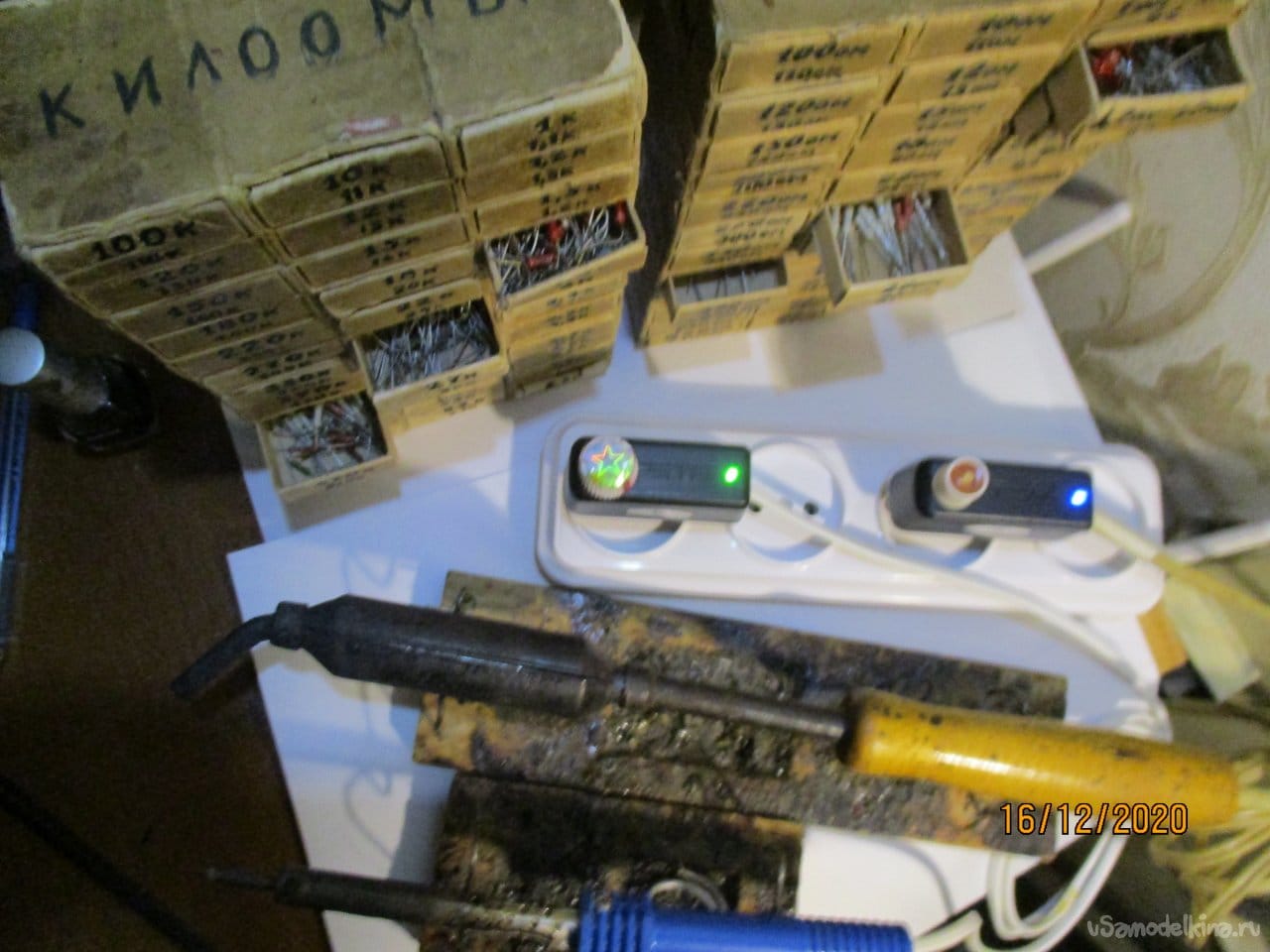