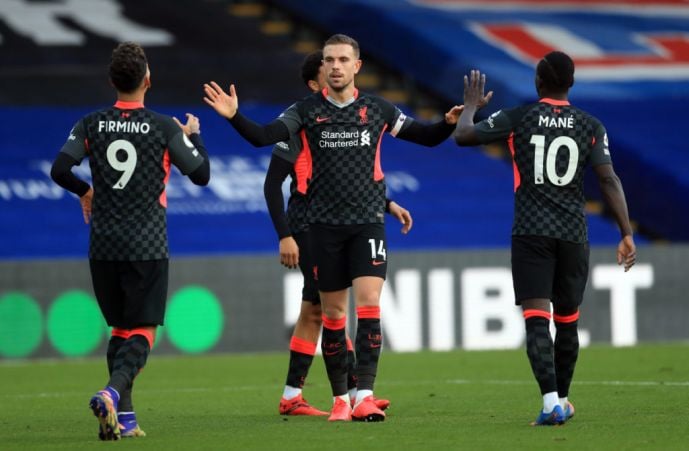 Liverpool produced a masterclass in finishing to win 7-0 at Crystal Palace and ensure they are number one at Christmas for the third year in a row in the Premier League.

With Mohamed Salah only on the bench at Selhurst Park, Takumi Minamino grasped his opportunity with a first league goal a year after he signed for the club before the old guard wrapped up the points in the capital.

Sadio Mane and Roberto Firmino added further strikes in the first half, the latter after a slick counter-attack, before four more goals were forthcoming in clinical fashion after the break.

Firmino completed a brace after Jordan Henderson’s curler and Salah was able to net a double during a 33-minute cameo to send out a statement to the chasing pack.

Crystal Palace had plenty of openings early on, but were unable to take them or more points off a title challenger – having held Tottenham to a 1-1 draw last weekend – and on this evidence, it looks like the league championship will go to Merseyside for another season.

The Reds returned to the summit with a 2-1 win over Spurs on Wednesday – a game where Salah opened the scoring, but he was only on the bench for this clash. Minamino, in the absence of the injured Diogo Jota, was handed a chance and needed only three minutes to take it.

Neat build-up play between Trent Alexander-Arnold and Mane saw the Japanese ace teed up inside the area and he worked a yard of space before he drilled into the bottom corner. It was Minamino’s first goal in the Premier League at the 18th time of asking.

Palace pressed afterwards and produced a number of openings with the best in the 24th minute when Jordan Ayew raced into the area but, instead of shooting at Alisson, he looked to cut back for Wilfried Zaha and the pass was behind his unmarked team-mate.

Palace almost paid for their profligacy five minutes later when Patrick Van Aanholt’s wayward back pass went to Minamino, but the Liverpool attacker sliced wide under pressure and after a deflection.

It was a short-lived reprieve for the Eagles, who conceded to a familiar foe when Mane got on the scoresheet against the south London club for the seventh successive game with 36 on the clock.

Gary Cahill had appeared to thwart the danger with a strong tackle on Minamino, but Firmino fizzed a pass into his other strike partner and the Senegal international fired into the bottom corner.

While Roy Hodgson would have wondered how his team were two goals down, even he would have admired the swiftness of Liverpool’s third a minute before half-time.

A sensational seven 🤩@LFC score 7⃣ away goals for the first time in the #PL to dismiss Palace pic.twitter.com/IBaq0lJRn2

Firmino passed out to Andrew Robertson and the left-back embarked on a trademark run before he delivered his usual level of quality in the final third.

In space to collect his inch-perfect cross was Firmino, who added to his goal against Spurs on Wednesday with another after a confident poke into the corner to make it 3-0.

Palace were out first after half-time, but Liverpool needed only seven minutes of the second period to find the net once more when captain Henderson curled home following a cutback by Alexander-Arnold.

As the heavens opened in SE25, Jurgen Klopp showed no mercy and introduced 14-goal Salah in the 57th minute despite Mane being reluctant to come off.

The ex-Southampton striker probably sensed there were more opportunities to be taken and he was right, with his replacement assisting Firmino for his second in the 68th minute.

Firmino controlled the pass elegantly and took it in his stride before he chipped over Palace goalkeeper Vicente Guaita to move to five goals for the season and display a new level of confidence following his midweek winner.

After his role as creator, Salah demonstrated his predatory instincts with a close-range header nine minutes from time following a corner and had one more special saved in reserve.

The Egyptian cut inside and powered home into the top corner from outside the area in the 84th minute to make it seventh heaven for Liverpool, who despite a lengthy injury list remain the side to beat in the title race.

Kevin Sinfield: ‘To see Rob on the finishing line made it so special’