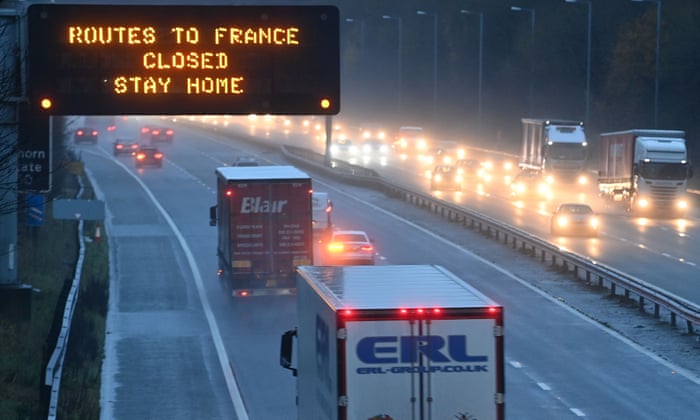 France’s 48-hour ban on freight hauliers from Britain was “surprising”, the UK transport secretary has said, amid expected chaos at British ports.

Although Grant Shapps said the disruption was not a “specific problem” in regards to food and medicine shortages in the short term, the government’s aim was to “get this resolved as soon as possible”.

“Immediately as soon as the French said, perhaps slightly surprisingly, that they would stop hauliers rather than just passengers, we were in touch with a group known as the Kent Resilience Forum,” Shapps told Sky News on Monday morning.

“They are well used to planning for exactly these kind of circumstances.”

He added that discussions were continuing between the UK and French governments, and that Manston airport in Kent would open on Monday as a lorry park.

Up to 4,000 lorries will be accommodated at the site, but due to the expected level of disruption the Department for Transport has advised hauliers to avoid travel to Kent ports until further notice.

Manston airport had been acquired recently by the government recently as a back up plan to cater for the worst possible Brexit scenario and has now become a priority because construction of the lorry park nearer Dover in Ashford is not yet complete.

The statements come after France also announced a travel ban on passengers arriving from the UK, alongside countries including Denmark, Germany, Italy, Belgium, Ireland, Turkey and Canada, over concerns about the prevalence of the fast-spreading new strain of Covid-19.

An emergency meeting of senior officials from the EU’s member states will coordinate the bloc’s response on Monday morning, with one option being a ban on travellers from the UK until 6 January. Experts will look at the option of tests for hauliers to protect the supply chains between the UK and the continent.

During a videoconference call of the Europe advisers of the 27 heads of state and government on Sunday night, the capitals had shared details of their travel bans. A meeting of EU leaders in the immediate days has not been discounted by sources in Brussels, with a no-deal Brexit also potentially looming.

A No 10 spokesman said the prime minister, Boris Johnson, would chair a Cobra meeting on Monday to address “the steady flow of freight into and out of the UK”.

France’s Europe minister, Clément Beaune, said Paris’s decision on Sunday night to suspend transport links from the UK for 48 hours had been taken “as an emergency and precautionary measure”.

France had received “this weekend, from the UK authorities themselves, including Boris Johnson, information that justified extra restrictions in the UK”, he said.

“We discussed with our European partners – President Macron spoke to Chancellor Merkel, in particular – and we decided that in order to gather as much more information as possible we had to take this emergency measure.

“It’s a tough measure because this is about protecting public health. We opted, like many European countries, such as Belgium for example, which also has very substantial traffic flows from the UK, to suspend all transport links from Britain for this 48-hour period.”

He added that the French government would be looking to find solutions for its citizens in the UK who wish “legitimately to return home for the holidays” and advised them to get a PCR test as a negative result would be needed for them to return.

Shapps said France’s ban on freight from the UK would also be “an inconvenience to them”, so there was “plenty of incentive” to resolve the situation.

He added that the country had gone “further than other countries quite rightly wanting to be precautionary about their approach”, but the reality was that the new strand of coronavirus “is probably elsewhere”.

He also said the UK’s vaccination rollout programme would not be affected by France’s ban on freight from the UK, saying that most supplies did not come via hauliers but containers.

“To put this into context, there are about 6,000 vehicles we would expect, just under in Dover today, probably I’d say 4,000 would have gone across from Dover, just under 2,000 on the Eurotunnel,” he said.

“But there’s probably something like 32,000 units that would have been the daily total so the vast majority including virtually all the vaccine actually comes via container.”