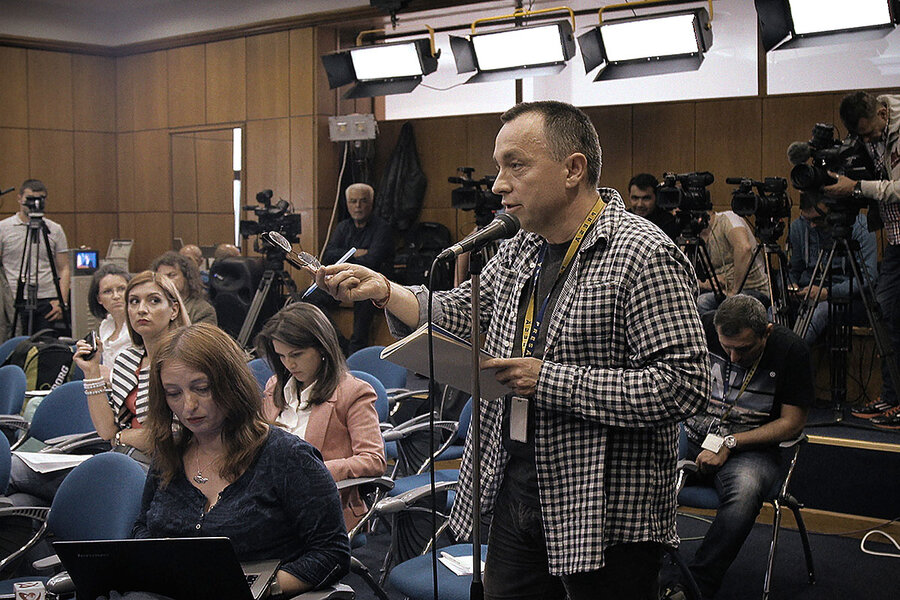 Barely seconds pass between the lead singer of heavy metal band Goodbye to Gravity pointing to the fire taking hold on the nightclub ceiling, the result of a pyrotechnic display gone awry, and the smoke engulfing the underground space. What followed, caught on hand-held video, is harrowing, with crowds rushing toward the only exit and young people falling over each other to escape.

The footage, which forms the opening scene of the Romanian documentary “Collective,” is difficult to watch. Sadly, it’s quickly overtaken by even more intense scenes in a film that feels at times like it is channeling movies such as “Spotlight” and “All the President’s Men.” “Collective” was recently chosen as its country’s Oscar entry for best international feature, and debuted on streaming platforms in the United States in November.

The nightclub fire, which took place in Bucharest in October 2015, would ultimately claim the lives of 64 people – 27 in the immediate aftermath and the rest over the following months. Four of five band members perished. The fire also toppled a government and raised significant questions about widespread corruption in the Romanian health care system.

The documentary has already provoked a powerful response in Romania and in film festivals around the world. Coming at a time when a global pandemic is testing government competency, it is likely to resonate with many viewers.

In 2015, as the death toll continued to rise after the nightclub fire, a team of investigative journalists began looking into why so many of the burn victims who made it to the hospital later died. Their discoveries are so shocking that at one point the journalists worry whether readers will believe them.

Mr. Nanau is present almost from the start, allowing viewers to follow the reporters as they chase down leads. Kickbacks, wanton indifference, and an aging and corrupt health care system are all exposed.

Cătălin Tolontan, the stoic editor in chief of Gazeta Sporturilor at the time, and his team dig into the main supplier of disinfectant to hundreds of Romanian hospitals. They discover that the company has been diluting the disinfectant, often to as low as 10% of its advertised concentration. The company’s owner crashes his car into a tree and dies before he can be brought to justice.

Meanwhile, the victims struggle to get on with their lives, and mass protests break out as the public learns details of the multiple scandals. Protesters chant the name “Tolontan” on the streets.

Mr. Nanau says he was initially concerned that “Collective,” named for the nightclub, would be too local a story. But he quickly realized the larger impact it could have and the global relevance.

“Corruption in the health care sector means you take advantage of people in their most vulnerable situation,” he says. “The health care system is just something that is so visibly affecting; it’s about life and death. Every stolen euro or dollar means that somebody will suffer.”

In many ways the success of “Collective” is in finding the perfect individuals through which to tell the story, gaining access, and then trying to be as unobtrusive as possible. Scenes are left to play out, with no talking heads, soundtracks, or narrative voice-overs.

Viewers are left to simply follow events as they unfold – to absorb the failures and indifference of those in power at the same time as those on screen do.

Partway through, the documentary starts to follow a new, young health minister, Vlad Voiculescu, who was brought in after the previous minister resigned over the scandal. Mr. Voiculescu, a banker and health care activist, initially seems way out of his depth. But ultimately he is one of the strongest moral voices in the film.

Mr. Voiculescu and his team face strong resistance from some politicians and hospital administrators, while having to accept that the health care system was culpable in many of the deaths. One particularly tough scene has Mr. Voiculescu sitting with some of the survivors as he tells them that they had been crammed into inadequate burn wards largely because the authorities didn’t want to pay for them to be treated abroad.

In an interview with the Monitor, Mr. Voiculescu says he wasn’t prepared for what he saw in the health care system, but that “every minute spent to change this is a minute well spent, an investment in the things that really matter.”

He says it pains him that so little has changed, and that much of what he and his team were able to achieve has been reversed in the years since.

“We need a totally different approach, in terms of transparency and accountability,” he says, “and I can only hope that I was able to show Romanians that this is possible, at every level.”