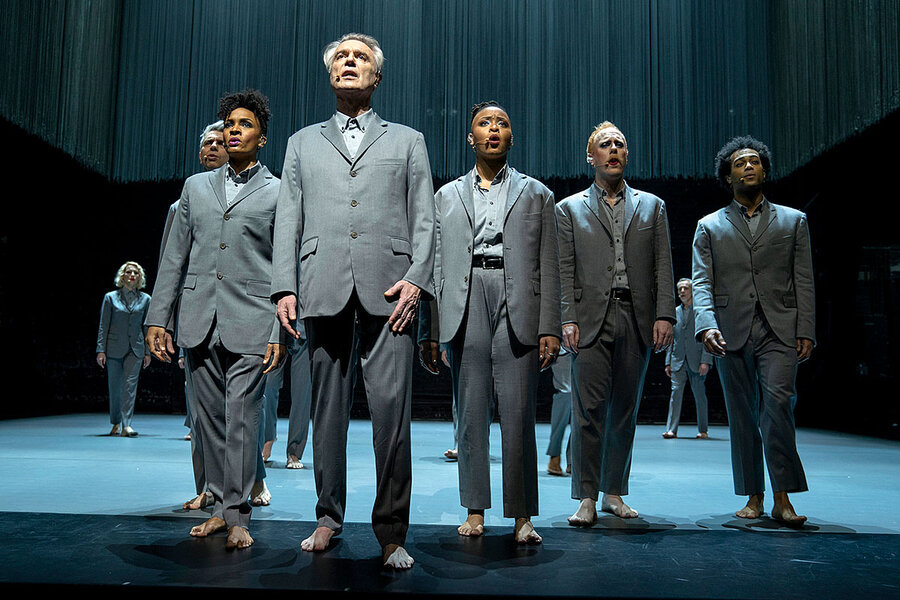 1. David Byrne’s American Utopia – Spike Lee’s documentary of David Byrne’s eponymous 2019 Broadway show, based on his 2018 album, is simply one of the best concert performance films ever made, almost up there with “Stop Making Sense” (featuring The Talking Heads, Byrne’s former group), “The Last Waltz” (The Band), and “Amazing Grace” (Aretha Franklin). Filmed before a live audience on a strikingly spare stage, Byrne and his multicultural troupe of 11 musicians and dancers from around the world, all barefoot in their gray wool suits, offer up a joyous paean to community and what brings us together. (HBO Max; rated TV-14)

2. A Regular Woman – The notorious 2005 “honor killing” of Hatun “Aynur” Sürücü, a 23-year-old Westernized Muslim woman in Germany, by one of her siblings, forms the basis for this extraordinary film directed by Sherry Hormann and starring Almila Bagriacik. Although it includes video footage of the real Sürücü, the film is a dramatic reenactment of her struggle, which she narrates for us both before and after her death. Her postmortem voice-over is more than an avant-garde gimmick. It serves to give the victim the voice against injustice that was denied her in life. The film has a wrenching, cumulative power. (Amazon Prime Video; not rated; in German with English subtitles)

3. City Hall – Fred Wiseman, at 90, is our greatest documentarian. His 45-film body of work eclipses that of all other living American directors. His latest film, running a captivating 4 1/2 hours, is about the inner and outer workings of Boston’s City Hall, focusing on the ministrations of Mayor Marty Walsh. As is true of so many of Wiseman’s films about institutions, the movie is ultimately a novelistic meditation on how people, in all their despair and joy and valor, attempt to live together. (Debuts on PBS on Dec. 22, or click here to see other options; not rated)

4. Emma – Jane Austen novels have so frequently been adapted for the screen that yet another entry, particularly of the oft-filmed “Emma,” might seem superfluous. Not so, in this case.

5. Fireball: Visitors From Darker Worlds – It’s one thing to make a documentary about meteorites that drop from the sky. It’s quite another to fashion a film that fully conveys the flat-out awesomeness of such events. Werner Herzog and his co-director, University of Cambridge scientist Clive Oppenheimer, travel the globe – visiting such far-flung locales as Western Australia; Mecca, Saudi Arabia; Norway; and a tiny island located in an archipelago between Australia and New Guinea – in order to show us how extraterrestrial rocks have shaped, both literally and figuratively, our planet and the culture and dreams of its inhabitants. (Apple TV+; rated TV-PG)

6. Ma Rainey’s Black Bottom – Let it be said of this adaptation of August Wilson’s 1984 play that you won’t see a finer pair of performances this year than Viola Davis as the voracious legendary blues singer Ma Rainey, and, in his last appearance, the late Chadwick Boseman as a cocky trumpeter with big ambitions.

In fact, under the direction of George C. Wolfe, the entire acting ensemble, which also includes Glynn Turman and Colman Domingo, is sterling. If we can’t attend live theater right now, this is the next best thing. (Netflix; rated R)

7. Miss Juneteenth – Writer-director Channing Godfrey Peoples’ debut features Nicole Beharie in one of the year’s finest performances as a struggling Fort Worth, Texas, single mom and former beauty queen, who wants a better life for her 15-year-old (Alexis Chikaeze). Few films have so poignantly portrayed the mother-daughter byplay. (Available on streaming platforms; not rated)

8. Never Rarely Sometimes Always – Newcomer Sidney Flanigan plays teenage Autumn, who travels from Pennsylvania to New York City with her devoted cousin, played by Talia Ryder, to secretly terminate her unwanted pregnancy. Both performances, like the film they figure in, are remarkably nuanced. Eliza Hittman has written and directed with the utmost delicacy and verity. She understands how silences can speak far louder than words, and she has the rare ability to film scripted scenes involving actors in a way that comes across as completely naturalistic. Her approach is entirely in keeping with how she handles the sensitivity of the material. This is a human drama we are watching, not a polemic. (HBO Max; rated PG-13)

9. 76 Days – This filmed-in-the-moment documentary, expertly directed by Hao Wu, Weixi Chen, and Anonymous, shows how the pandemic first hit four hospitals in Wuhan, China. It’s often tough to watch, but I think it will become an essential historical document. In showcasing the kindness, empathy, and courage of the medical personnel, it’s just about as inspiring a movie as I’ve ever seen. (Click here to find virtual showings; not rated)