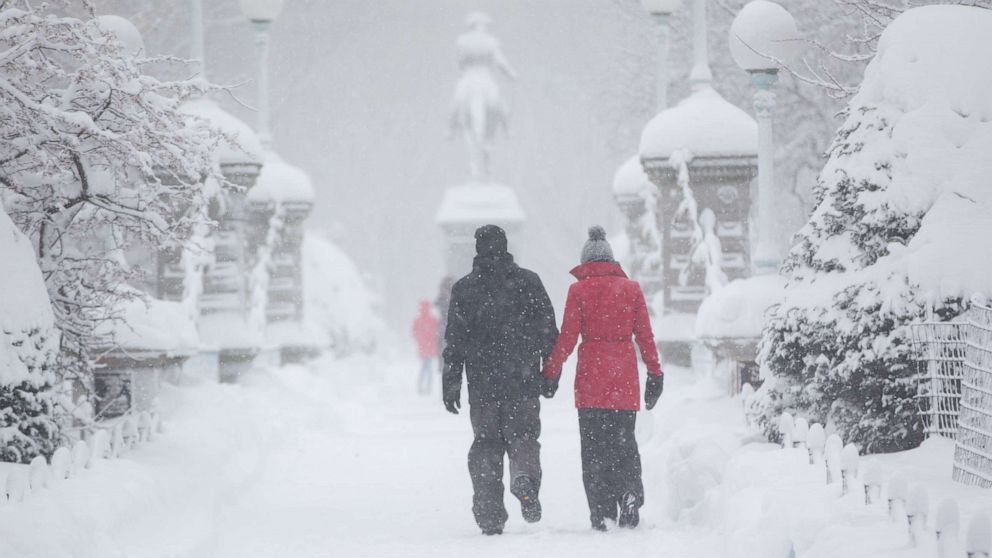 A blast of cold air, exacerbated by a fresh snowpack, is impacting parts of the Northeast Saturday morning.

Wind chills are the coldest they have been so far this season.

Wind chills in New York City are expected to be as low as 7 degrees Fahrenheit, as low as 10 degrees in Boston and as low as 9 degrees in Burlington, Vermont.

The actual air temperatures are running about 10 degrees below average for the Northeast Saturday morning — which is normal for late December.   On Sunday morning, temperatures will moderate, but wind chills will still be quite cold — in the teens and 20s — for much of New England. There will also be a wind chill of 19 degrees in Boston and one of 16 degrees in Burlington, Vermont.

Overall, however, the weather this weekend will be on the quieter side following a very active weather week.

Another storm system will bring some heavy and rain and mountain snow to the Pacific Northwest beginning late Saturday into Sunday. The heavy rain could cause some localized landslides.

Then, on Monday, another storm will move into the Northwest. It is expected to travel across the U.S. over Christmas week.

Once the storm makes it into the middle of the country, it will bring snow and strong thunderstorms.

By Wednesday, parts of the Midwest will see snow, and a very long line of gusty storms will extend through the Mississippi River Valley. It is too early to determine how much snow will accumulate in the upper Midwest, but the early guidance suggests it won’t be a blockbuster snowfall.

On Christmas Eve, the storm will arrive on the eastern U.S. This will likely cause a round of mild air and thunderstorms for cities such as Philadelphia and New York City. Eventually, the cold air surging in behind the storm will cause some of that rain to turn into snow, and several areas — especially the Appalachian Mountains — will likely see another round of heavy snow.

Snowfall caused by the storm could be a little more robust than in the Midwest, but it’s still too early to determine how much will fall.

By Christmas Day, the entire storm will begin moving around southern Canada.

Behind the storm system, a big blast of cold air will surge into the U.S., and wind chills as low as -20 degrees will hit the upper Midwest on Christmas Eve and Christmas Day. We may also see wind chills in the teens and 20s in parts of the Deep South.

There is still a lot of uncertainty regarding the exact placement of the snow and thunderstorms, as we are a few days away; however, it does appear that Christmas week will be an active one, and that a good chunk of the country will see some snow.