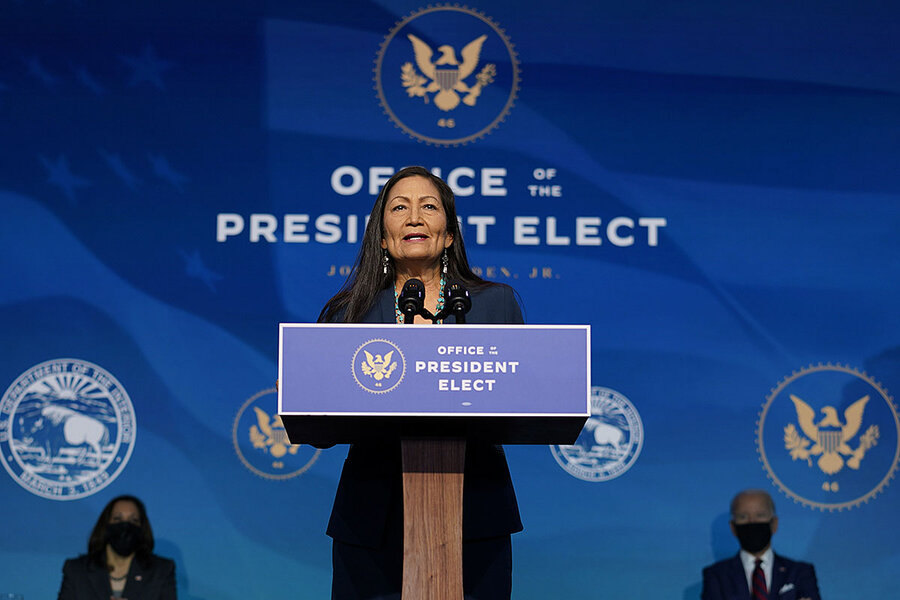 In recent centuries, that view hasn’t carried much weight beyond tribal boundaries. Over the history of tribes’ government-to-government relationship with Washington – formalized after centuries of exploitation and bloodshed – there has been a lot more take than give from Uncle Sam.

That could soon change.

Following weeks of grassroots campaigning, Democratic Rep. Deb Haaland of New Mexico, a member of the Pueblo of Laguna tribe, has been nominated for Secretary of the Interior by President-elect Joe Biden. If confirmed she would become the first Native American Cabinet secretary in U.S. history.

A victory for progressives, and a sign of growing political power and organization in Indian Country, Representative Haaland taking lead of the sprawling Department of the Interior (DOI) would put Native Americans at the forefront of the Biden administration’s efforts to take sweeping action on climate change.

But her appointment would represent much more than policy shifts. Especially for Native Americans, it would mark an unprecedented shift in U.S.-tribal relations, giving tribes an access to power they haven’t enjoyed since they began signing treaties in 1778.

“The excitement is palpable in Indian Country,” says Traci Morris, executive director of the American Indian Policy Institute at Arizona State University. “It makes us part of the present, not just part of the history.”

And after a year marked by natural disasters and pandemic-induced quarantines, adds Dr. Morris, it’s the perfect time for a Native woman to be taking control of the agency that “manages the physical manifestation of America.”

“It’s who we are to take care of these places, to be the best stewards we can for future generations,” she continues. “Those are our American lands. It’s our American water. … Indigenous issues are American issues.”

The Interior Department has been the principal point of contact between the federal government and tribal communities – from managing lands and resources, to education and economic development – since it was formed in the mid-19th century. That relationship has typically been sour, if not outright hostile.

From allotment policies in the 19th century that saw millions of acres of land taken from tribes, to forcibly sending their children to residential schools designed to assimilate them into white culture, even to the modern era of self-determination where tribes have had more control of their own affairs, Native Americans say the DOI has more often been seen as an adversary than a co-equal government partner.

Native Americans have had prominent positions in the agency, including leading the Bureau of Indian Affairs, but having a Native woman in the top position would be a quantum leap. Not just progress, but a wholesale rebalancing of the relationship.

“It’s resetting the relationship with the first peoples of this land,” says Crystal Echo Hawk, founder and CEO of IllumiNatives, a nonprofit advocacy group.

“We know Deb, we trust Deb, and that’s never been had before.”

The announcement of Representative Haaland’s nomination last week uncorked waves of emotion from the Great Lakes to California’s Redwood forests to the Oklahoma plains.

After a year in which Native communities have been ravaged by the COVID-19 pandemic and by unprecedented, climate change-fueled wildfires across the western U.S., they voted in droves to help Mr. Biden win key states like Arizona and Wisconsin. Once that had been achieved, they turned their attention to campaigning for Representative Haaland’s nomination for Interior secretary.

Ms. Echo Hawk, a member of the Cherokee Nation, cried after she heard. So did her daughter, her nieces, and her friend, who broke the news to her.

“This is more than just checking a box for diversity in the Cabinet,” she says.

“Native people have been made to think we’re less than human, that things aren’t possible for us, and [Representative Haaland] once again shattered that glass ceiling.”

This isn’t the first trail the New Mexico politician has blazed. Two years ago she became one of the first two Native women to be elected to Congress.

But in that capacity she had the companionship of Rep. Sharice Davids of Kansas, a member of the Ho-Chunk Nation. If she is confirmed by the Senate next year she will be taking on a much more challenging – and lonely – position.

If anyone has an idea of what she’s in for, it’s Judge Abby Abinanti, the first Native woman to pass the California bar and be a state judge.

“This is going to take and take and take from her,” says Judge Abinanti, who has spoken occasionally with Representative Haaland.

“You just have to realize, and she will, it’s not about me, it’s about what our role is,” she adds. “You just reach back into yourself. She was raised with that strength, and she can do this.”

A single mom who has lived off food stamps and still had student debt from law school when she entered Congress in 2018, Representative Haaland has developed a reputation as a productive and progressive lawmaker capable of working across the aisle.

Bipartisanship and pragmatism have been common traits among the few Native lawmakers who’ve worked on Capitol Hill. They’ve frequently been members of both parties, and tribal issues themselves have historically been nonpartisan. Whichever party is in power, tribes have had to work with them.

“Tribes will find friends where they can find friends,” says Keith Harper, a member of Cherokee Nation and the first Native American to represent the U.S. on the U.N. Human Rights Council.

Representative Haaland “has a deep commitment to certain values, but she also knows how to work with others,” he adds. “It’s an inspired and visionary choice tailor-made for this precise moment.”

From Republicans to progressive Democrats – including Republican Rep. Tom Cole of Oklahoma and Democratic Rep. Alexandria Ocasio-Cortez of New York – many in Congress agree. And she is now poised to take control of an agency with a portfolio that reaches far beyond Indian Country.

“We need to engage”

With 70,000 employees and a budget of about $12 billion, Representative Haaland would take charge of not only the Bureau of Indian Education but also the U.S. Geological Survey and the Office of Small and Disadvantaged Business Utilization. The DOI manages not just federal lands, water, and wildlife but also natural resources. That balance between Native issues, conservation, and energy and economic development is a challenging balance for any Interior secretary to strike.

What Indian Country expects is that Representative Haaland would strike that balance in a way no other Interior secretary has before.

“She understands the balance between energy needs and jobs and a decent life for all people, including ours,” says Judith Le Blanc, director of the Native Organizers Alliance and a member of the Caddo Tribe of Oklahoma.

“No doubt it will be a very tough road,” she adds. But “she will be able to balance the needs of Mother Earth and of people.”

Representative Haaland’s work would make Indian Country “feel that we have been re-written into history.”

“I’m feeling a little emotional,” she continues. “For democracy to be full and complete and meet the expectations people have for democracy, we need more Debs.”

Indeed, Indigenous approaches and philosophies have been marginalized for so long in the U.S. that they represent an untapped well of solutions for the country, says Judge Abinanti.

The Yurok tribe live in a secluded corner of the Northern California coast, and this year she has watched her community grapple with wildfires and a bad salmon run. River and forest management are two areas where the Yurok – and tribes across the country – have seen their generations of expertise go unheeded by Washington.

“We have said forever, ‘Do controlled burns.’ Now people are saying, ‘We should do controlled burns,’” says Judge Abinanti. “It just makes you want to hit yourself in the head with a rock.”

But tribes have also, historically, not engaged enough with the world, Native activists say. This is in part due to a focus on tribal government and preserving cultures brought near the brink of extinction, but with the political activism of 2020 that era of insularity seems to be ending. Representative Haaland is leading it.

“They need to know things that we know, and we … need to implement them,” says Judge Abinanti, “or everybody’s going to go down on this ship.”

“We were never the kind of people who ran and hid. … We did that to survive,” she adds. “Now we’re [realizing] that’s not how this place is going to survive. We need to engage.”